Solutions of The Human Eyes And The Colorful Wor (Page No- 288) - Physics By Lakhmir Singh, Class 10 Class 10 Notes | EduRev

Question 1: As light rays pass from air into a glass prism, are they refracted towards or away from the normal ?

Solution : Towards the normal

Question 2: As light rays emerge from a glass prism into air, are they refracted towards or away from the normal ?

Solution : Away from the normal

Question 3: Name a natural phenomenon which is caused by the dispersion of sunlight in the sky.

Question 4: What information do we get about sunlight from the formation of a rainbow ?

Question 5: What did Newton demonstrate by his experiments with the prism ?

Solution : Newton demonstrated by his experiments with the prisms that white light consists of a mixture of seven colours.

Question 7: Give the meaning of the term VIBGYOR. With which phenomenon is it connected ?

Solution : The seven colours of the spectrum of white light are denited by the word VIBGYOR where V stands for Violet, I for Indigo, B for Blue, G for Green, Y for Yellow, O for Orange and R for Red.
It is connected with the phenomenon of dispersion of light.

Question 8: In the formation of spectrum of white light by a prism :

Question 9: What colours lie on the two sides of the ‘green colour’ in the spectrum of white light ?

Question 10: Name the scientist who discovered that sunlight consists of seven colours.

Question 11: What is the order of colours in a rainbow, from the outside to the inside ?

Question 13: Which light has the longer wavelength : red light or blue light ?

Question 14: Which colour of light has the shorter wavelength – red or violet ?

Solution : (a) towards, away from
(b) seven, violet 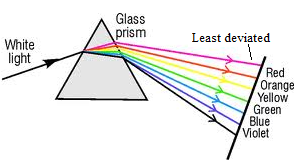 Question 17: (a) What happens when a ray of ordinary light is passed through a triangular glass prism ?
(b) What will happen if another similar glass prism is placed upside down behind the first prism ?

Question 19: (a) What is spectrum ? What is the name of glass shape used to produce a spectrum ?
(b) How many colours are there in a full spectrum of white light ? Write the various colours of spectrum in the order, starting with red.

Question 20: What is meant by dispersion of white light ? Describe the formation of rainbow in the sky with the help of a diagram.

Solution : The splitting up of white light into seven colours on passing through a transparent medium like a glass prism is called dispersion of light. 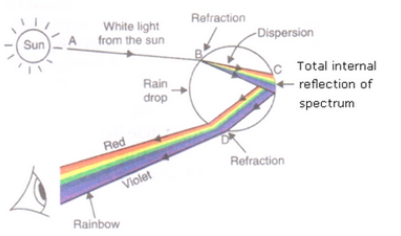 The raindrops act like small prisms. When sunlight enters and leaves these raindrops, the various coloured rays in white light are refracted by different amounts due to which an arc of seven colours called rainbow is formed.

Question 21: In the figure given alongside, a narrow beam of white light is shown to pass through a triangular glass prism. After passing through the prism, it produces a spectrum YX on the screen.

(b) Why do different colours of white light bend through different angles with respect to the incident beam of light ?

Question 22: Draw a diagram to show how white light can be dispersed into a spectrum by using a glass prism. Mark the various colours of the spectrum. 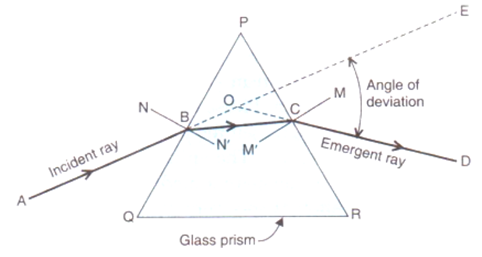 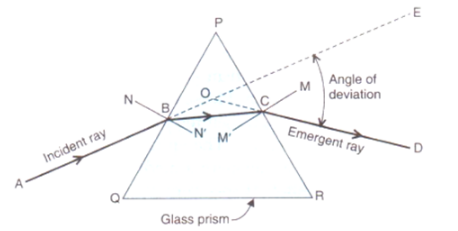 Question 24: Describe how you could demonstrate that white light is composed of a number of colours.

Question 25: How could you show that the colours of the spectrum combine to give white light ?

Solution : Colours of a spectrum from one prism are allowed to fall on a similar prism placed adjacent to the first prism, but in inverted position. The refraction produced by second prism is equal and opposite to that produced by the first prism. This makes the colours of the spectrum combine to give white light.

Question 26: Which is refracted most by a prism : red light or violet light ? Explain why ?

Solution : Violet light is refracted the most because violet colour has the minimum speed in glass prism.

Question 27: (a)Draw a diagram to show the refraction of light through a glass prism. On this diagram, mark 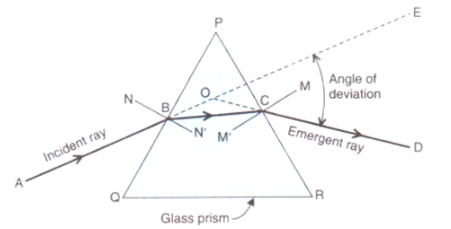 (b) Rainbow is an arch of seven colours visible in the sky which is produced by the dispersion of sun’s light by raindrops in the atmosphere. A rainbow is formed in the sky when the sun is shining and it is raining at the same time.
(c) Raindrops
(d) Dispersion of light
(e) Red, Orange, Yellow, Green, Blue, Indigo and Violet.