Speed Control of DC Series Motors In the last class, we have seen how to apply dynamic braking to a DC series motor. We have mentioned that although it is possible to apply dynamic braking in a DC series motor by reversing the field terminal and connecting a braking resistance at the terminal of the machine. The problem is as the machine speed goes down the braking torque also reduces. This problem can be overcome using a chopper and we will see through an example how it is done.(Refer Slide Time: 01:02) 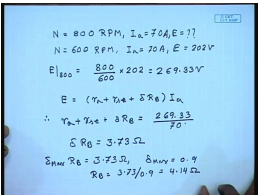 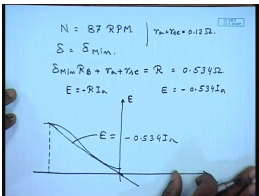 Now, suppose with this braking resistance let us try to find out what is the maximum torque we can get with this chopper when the speed goes down to N equal to 87 R P M. Now as the speed goes down we also reduce the effective resistance then at lower speed we will operate at delta equal to delta min. So, the total delta min R B will be the effective resistance plus r a plus r s e will be the braking resistance R. This will come to 0.534 ohms as r a plus r s e is given as. Also E equal to R I a. So, if we plot from the given data at 600 R P M we can plot the E versus I a at 87 R P M, and then also plot E equal to this is has to be taken in the reverse direction because current has reversed minus 0.534 I a and find out the intersection point turns out. At the intersection point I a comes out to be approximately 50 ampere.(Refer Slide Time: 10:24) 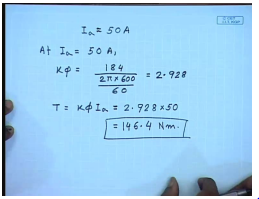 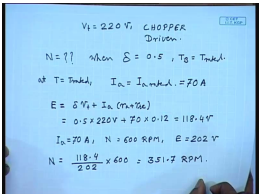 So, let us say this same machine is supplied from a V t of 220 volts through a chopper and chopper driven. So, what should be the motor speed when delta equal to 0.5 and braking torque equal to T rated. Now at rated motor torque at T equal to T rated whether it is motoring operation or braking operation I a will be equal to I a rated. This is 70 ampere. So, what is E now it is braking operation. So, E equal to delta V t plus I a into r a plus r s e that is equal to 0.5 into 220 volts plus 70 into 0.12 this comes to 118.4 volts.From the magnetization characteristics we know that at I a equal to 70 ampere and N equal to 600 R P M. E is equal to 202 volts. So, if E is to be 118.4 volts at the same armature current then the speed must be. So, even at this speed the regenerated braking torque equal to the maximum rated motor torque can be produced using a chopper.(Refer Slide Time: 15:44) 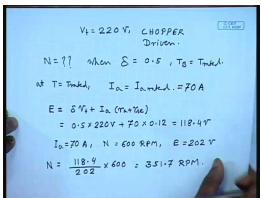 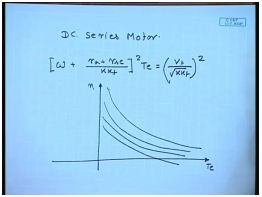 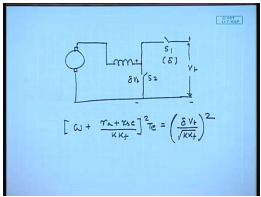 So, if we fit the DC series motor from a chopper, and this is one operates at the duty ratio of delta then the terminal voltage here will be delta V t and the torque speed characteristics will be given by… Hence by changing delta this is increasing delta.(Refer Slide Time: 21:32) 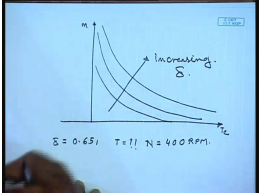 So, let us see through a problem the quantitative effect the same motor that we have been using now let us try to find out, if I set a delta equal to 0.65 then what should be the torque for N equal to 400 RPM.(Refer Slide Time: 22:58) 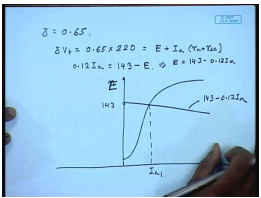 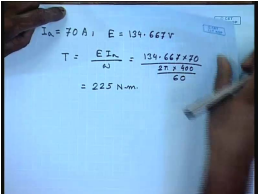 And also gives a E of 134.667 volts. Torque will be equal to E I a by omega that is one 134.667 into 70 RPM. Please remember this should be O C C at 400 RPM not 600 RPM. 2 pi into 400 by 60 this comes to 225 Newton meter. So, given the delta and speed we can find out the torque or if we given the delta or current we can find out the speed. So, chopper control is an effective method of controlling the speed of a DC series motor efficiently.However if we do not this has to be remembered that this chopper which is connected to the machine terminal has to carry the whole machine current. So, the switches that are used in this chopper should be designed to withstand the full current of the machine this makes the system of speed controls somewhat expensive there are other simpler method of controlling the speed of DC series motor in which case we can see that we can also control the value of k k f in the equation of torque speed characteristics in order to control the speed of a DC series motor. There are several methods for doing this one is called the field diverter control.(Refer Slide Time: 28:02) 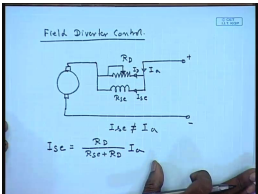 In this what we do is that, the field is shunted by a variable diverter resistance R d. If this is R s e and the total current is I a then there in there is current I d and I s e. So, once you place a diverter by adjusting the value of R d we can adjust the value of I s e, and I s e in this case will not be is not equal to I a. We can also find out what will be the value of I s e. I s e equal to R d divided by R s e plus R d into I a. For in which case the torque speed characteristics will also change because E equal to K phi I a equal to K K f, I s e, I a.(Refer Slide Time: 30:08) 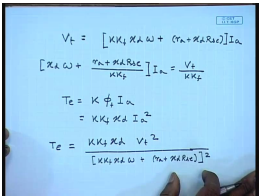 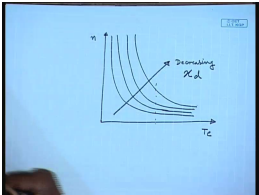 We draw these torque speed characteristics it will look somewhat like, this is decreasing x d that is this amounts to weakening the series field. So, we know that for the same torque if the field is weakened the speed increases. There are another method on somewhat the same line is called the tapered field control, in which tapped field control, in which there are several taps.(Refer Slide Time: 37:23) 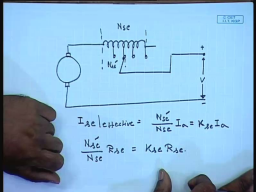 There are several taps that are taken from the series field, and actually at any given moment the field can be connected to any one of those taps. Here also if we are basically changing the field ampere turns and hence the field flux. Let us say the total number of series field terms is N s e and between the present tap it is N s e dash. So, effective series current I s e equal to N s e dash divided by N s e into I a which is some k s e I a . So, the resistance also next will be somewhat assuming them to be proportional to n s e dash by N s e into R s e to K s e R s e. As in this case also we will get similar torque speed characteristics as in the case of field diverter where x d will now be replaced by R s e. A special case of this type of field control is called where the field winding is arranged is in several sections and series parallel combination of these sections are used.(Refer Slide Time: 40:00) 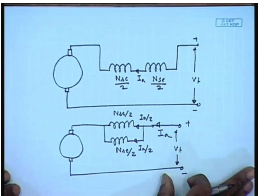 For example let us say that we have a DC series machine whose field winding has two sections of equal number of turns, each N s e by 2. Now these two series these two field winding can also be connected in parallel like this, whereas in this case the total current flowing to each of them is I a. Here it is I a by 2 and this is I a by 2 total current being same I a.(Refer Slide Time: 41:39) 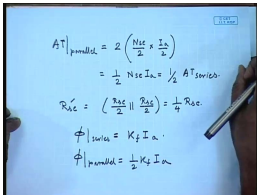 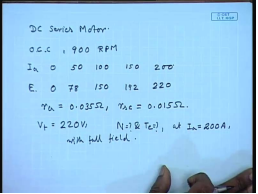 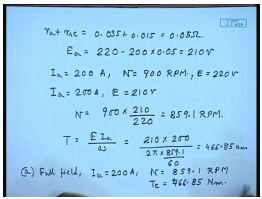 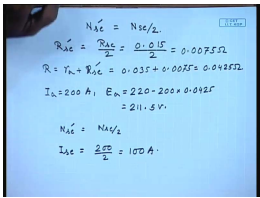