Storage Devices or Memory Units of a Computer

Storage Devices is the most essential elements in a computer system. The internal storage holds the data while processing.

When saving anything on a computer, it may ask you for a storage location, which is the area in which you would like to save the information. By default, most information is saved to your computer hard drive. 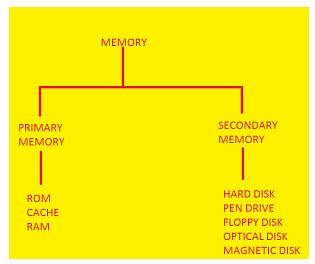 Primary Memory, also known as main storage, is the area in a computer in which data is stored for quick access by the computer’s processor. It is a computer system’s volatile storage mechanism. This includes several types of memory, such as the processor cache and system ROM. However, in most cases, primary memory refers to system RAM.

RAM, or random access memory, consists of one or more memory modules that temporarily store data while a computer is running. RAM is Volatile Memory, meaning it is erased when the power is turned off. Therefore, each time you start up your computer, the operating system must be loaded from secondary memory (such as a hard drive) into the primary memory, or RAM. Similarly, whenever you launch an application on your computer, it is loaded into RAM. The two main types of RAM are,

ROM is memory containing hardwired instructions that the computer uses when it boots up, before the system software loads. ROM stores the program required to initially boot the computer. It only allows reading. The data stored on ROM cannot be changed. ROM is Non-Volatile Memory. It can keep the contents without even the power source.  The types of ROM include,

Cache memory is a type of memory used to hold frequently used data. Cache memory is relatively small but very fast. Most web browsers use a cache to load regularly viewed web pages fast. The most important type of cache memory is the CPU cache. Once the data is stored in cache, it can be used by accessing the cached copy rather than recomputing the original data.

A floppy disk is a secondary storage device. It is a circular piece of plastic material coated with particles, which are magnetized. This thin plastic sheet is protected from outside by a plastic cover to prevent the sensitive data stored on them. The commonly used floppy disks are of 3.5 ” diameter. Floppies are used to store data and transfer them from one computer to another. 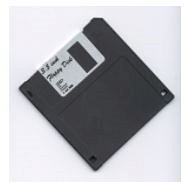 A hard disk is fixed inside the cabinet of CPU (Central Processing Unit). It is made up of many rigid metal platters coated to store data magnetically.  The normal speed of hard disks is 3600 revolutions per second. The read/write head of the hard disks moves across its surface. The storage capacity of the hard disks is many times more than the floppy disks.

CD-ROM stands for Compact Disk – Read Only Memory can store up to 600 to 750 MB of data in it. Once the data is stored into the CD ROM it cannot be erased. In case of Re-writable CDs, the data can be erased and it can be re-used.

Pen Drive is a small storage device that can be connected to a computer via standard USB (Universal Serial Bus). It is usually removable, re-writable and easy to carry. It operates fast and capable of holding more data than CD and Floppy.

An external hard drive is a portable storage device that can be attached to a computer through a USB. External hard drives typically have high storage capacities than pen drives and are often used to back up computers or serve as a network drive.