No. of atoms left after 40 years are derived as follows using the relation

12. A first order reaction A→ B , requires activation energy of 70kJ mol–1. When a 20% solution of A was kept at 25°C for 20 minutes, 25% decomposition took place. What will be the percent decomposition in the same time in a 30% solution maintained at 40°C? Assume that activation energy remains constant in this range of temperature. (1993 - 4 Marks) 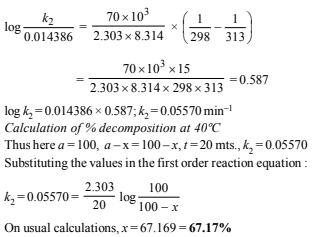 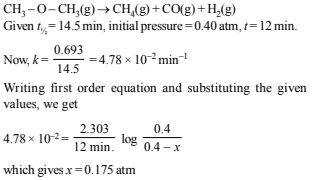 Since volume and temp. are constant, final pressure :

14. The progress of the reaction, A

nB  with time, is presented in figure given below. Determine Decrease in concentration of A in 4 hours

Increase in concentration of B in 4 hours

Calculate   (i) the order of the reaction with respect to A and with   respect to B,   (ii) the rate constant at 300K   (iii) the energy of activation, and   (iv) the pre-exponential factor

∴ The rate equation for the reaction is 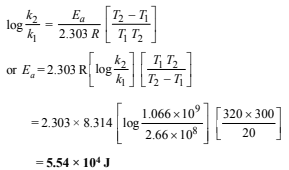 (iv) Determination of the pre-exponential factor 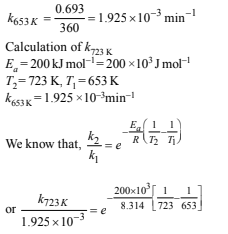 Calculation of time for 75% decomposition at 723 K

Substituting the values in the given relation, 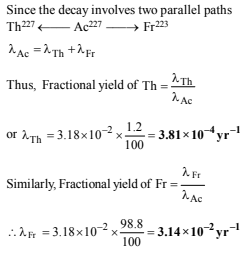 19. The ionisation constant of

20. The rate constant for the first order decomposition of a certain reaction is described by the equation

(i) What is the energy of activation for this reaction?(ii) At what temperature will its half-life period be 256 minutes?

Solution: (i) The Arrhenius equation is

Taking natural logarithm, we get

(ii) The reaction is first order as the unit of rate constant is s–1. For a first order reaction, 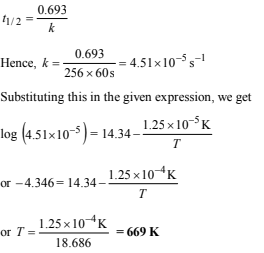