Q.1. A column of mercury of 10 cm length is contained in the middle of a narrow horizontal 1 m long tube which is closed at both the ends. Both the halves of the tube contain air at a pressure of 76 cm of mercury. By what distance will the column of mercury be displaced if the tube is held vertically?       (1978)

Solution. M is the mid-point of tube AB. 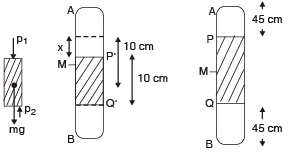 For air present in column AP

For air present in column QB

Q.2. A point mass m is suspended at the end of a massless wire of length l and cross section A. If Y is the Young’s modulus for the wire, obtain the frequency of oscillation for the simple harmonic motion along the vertical line.   (1978)

Solution. From fig. (b), due to equilibrium

On comparing this equation with F = – mω2x, we get

Solution. Let the edge of cube be ℓ. When mass is on the cube of wood

When the mass is removed

Q.4. A boat floating in a water tank is carrying a number of large stones. If the stones are unloaded into water, what will happen to the water level?    (1979)

When the stones were in the boat, the weight of stones were balanced by the buoyant force.

Vℓ, Vs = volume of liquid and stone respectively

Therefore when stones are put in water, the level of water falls.

Where A is the area of cross section of the rod.

Q.6. A ball of density d is dropped on to a horizontal solid surface. It bounces elastically from the surface and returns to its original position in a time t1. Next, the ball is released and it falls through the same height before striking the surface of a liquid of density of dL                    (1992 - 8  Marks)

(a) If d < dL, obtain an expression (in terms of d, t1 and dL) for the time t2 the ball takes to come back to the position from which it was released. (b) Is the motion of the ball simple harmonic? (c) If d = dL, how does the speed of the ball depend on its depth inside the liquid? Neglect all frictional and other dissipative forces. Assume the depth of the liquid to be large.

Solution. (a) Let the ball be dropped from a height h. During fall

In the second case the ball is made to fall through the same height and then the ball strikes the surface of liquid of density dL. When the ball reaches inside the liquid, it is under the influence of two force (i) Vdg, the weight of ball in downward direction(ii) VdLg, the upthrust in upward direction.

Note : The viscous forces are absent. (given)

the upward force is greater and the ball starts retarding.

For motion B to C

(b) Since the retardation is not proportional to displacement, the motion of the ball is not simple harmonic.(c) If d = dL then the retardation a = 0. Since the ball strikes the water surface with some velocity, it will continue with the same velocity in downward direction (until it is interrupted by some other force).

Q.7. A container of large uniform cross-sectional area A resting on a horizontal surface, holds two immiscible, non-viscous and incompressible liquids of densities d and 2d, each of height H/2 as shown in the figure. The lower density liquid is open to the atmosphere having pressure P0.

(a) A homogeneous solid cylinder of length L(L < H/2), cross-sectional area A/5 is immersed such that it floats with its axis vertical at the liquid-liquid interface with length L/4 in the denser liquid. Determine:

(i) the density D of the solid and(ii) the total pressure at the bottom of the container.

(b) The cylinder is removed and the original arrangement is restored. A tiny hole of area s(s << A) is punched on the vertical side of the container at a height h(h < H/2).

Determine : (i) the initial speed of efflux of the liquid at the hole, (ii) the horizontal distance x travelled by the liquid initially, and (iii) the height hm at which the hole should be punched so that the liquid travels the maximum distance xm initially. Also calculate xm.

(Neglect the air resistance in these calculations.)

For vertical motion of liquid falling from hole For finding the value of h for which x is maximum, we differentiate equation (iii) w.r.t. t

Q.8. A non-viscous liquid of constant density 1000 kg/m3 flows in a streamline motion along a tube of variable cross section.

The tube is kept inclined in the vertical plane as shown in Figure. The area of cross section of the tube two points P and Q at heights of 2 metres and 5 metres are respectively 4×10–3 m2 and 8×10–3 m2. The velocity of the liquid at point P is 1 m/s. Find the work done per unit volume by the pressure and the gravity forces as the fluid flows from point P to Q.      (1997 - 5 Marks)

According to Bernoulli's theorem,

Q.9. A unifor m solid cylinder of density 0.8 g/cm3 floats in equilibrium in a combination of two non-mixing liquids A and B with its axis vertical.

Solution. (a) As the pressure exerted by liquid A on the cylinder is radial and symmetric, the force due to this pressure cancels out and the net value is zero.(b) For equilibrium, Buoyant force = weight of the body

Q.10. A bubble having surface tension T and radius R is formed on a ring of radius b (b << R). Air is blown inside the tube with velocity v as shown. The air molecule collides perpendicularly with the wall of the bubble and stops.

Solution. KEY CONCEPT :  When the force due to excess pressure in the bubble equals the force of air striking at the bubble, the bubble will detach from the ring.

Q.11. Shown in the figure is a container whose top and bottom diameters are D and d respectively. At the bottom of the container, there is a capillary tube of outer radius b and inner radius a.

Solution. KEY CONCEPT : When the tube is not ther e, using Bernoulli's theorem

But according to equation of continuity

Q.13. A uniform wire having mass per unit length λ is placed over a liquid surface. The wire causes the liquid to depress by y(y << a) as shown in figure. Find surface tension of liquid.

Solution. The free body diagram of wire is given below. If ℓ is the length of wire, then for equilibrium 2F sin θ = W.

Let us consider a mass dm situated at a distance x from A as shown in the figure. The centripetal force required for the mass to rotate = (dm) xw2

This centripetal force is provided by the weight of liquid of height H.