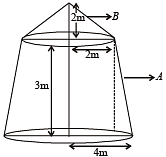 Q.5. The diameter PQ of a semicircle is 6 cm. Construct a square ABCD with points A, B on the circumference, and the side CD on the diameter PQ. Describe briefly the method of con struction. (1980)

Now on number line we locate M such that OM =

on opposite sides of O.

At C and B draw perpendiculars to PQ. With O as centre and OP as radius, draw a semicircle intersecting the perpendiculars draw at C & D at A and P respectively. Join AB. ABCD is the required square.

∴ Given equality is true.

Ans. Sol. We are given that

Each A'is contain 5 elements, so

∴ Number of different elements in

contains 3 × n = 3n elements (with repetition), out of which each element is repeated 9 times (as each element of S belongs to 9 B'js)

∴ No. of different elements in

The mean suqare deviations about –1 and +1 of a set of observatons are 7 and 3 respectively. Find the standard deviation of this set  of observations. (1981 - 2 Marks)

Also given that mean square deviations about – 1 and + 1 are 7 and 3 for a particular set of observations.

and  NOTE THIS STEP

{using the given value}

Q.11. A relation R on the set of complex numbers is defined by z1 R z2 if and only if

Ans. Sol.  Given that

To show that R is an equivalence relation.Reflexivity : For z1 = z2 = z (say)

is real⇒ z1R z3 ∴ R is transitive.Thus R is reflexive, symmetric and transitive.Hence R is an equivalence relation.