Q.1. A single electron orbits around a stationary nucleus of charge + Ze. Where Z is a constant and e is the magnitude of the electronic charge. It requires 47.2 eV to excite the electron from the second Bohr orbit to the third Bohr orbit.

According to Bohr’s postulate,

Q.2. Hydrogen atom in its ground state is excited by means of monochromatic radiation of wavelength 975Å. How many different lines are possible in the resulting spectrum ?

For every possible transition one downward arrow is shown therefore the possibilities are 6.

Note : For longest wavelength, the frequency should be smallest.

This corresponds to the transition from n = 4 to n = 3, the energy will be

Q.4. The ionization energy of a hydrogen like Bohr atom is 4 Rydbergs.  (i) What is the wavelength of the radiation emitted when the electron jumps from the first excited state to the ground state ? (ii) What is the radius of the first orbit for this atom?              (1984- 4 Marks)

(ii) The radius of the first orbit

(i) Find the wavelength of the radiation required to excite the electron in Li++ from the first to the third Bohr orbit. (Ionisation energy of the hydrogen atom equals 13.6 eV.) (ii) How many spectral lines ar e observed in the emission spectrum of the above excited system?

Q.6. A triode has plate characteristics in the form of parallel lines in the region of our interest. At a grid voltage of – 1 volt the anode current I (in milli amperes) is given in terms of plate voltage V (in volts) by the algebraic relation : I = 0.125V – 7.5

We know that plate resistance,

The characteristics are given in the form of parallel lines.  Amplification factor

Solution. (i) Let m be the mass of electron. Then the mass of mumeson is 208 m. According to Bohr’s postulate, the angular momentum of mu-meson should be an integral multiple of h/2π.

Note: Since mu-meson is moving in a circular path, therefore, it needs centripetal force which is provided by the electrostatic force between the nucleus and mumeson.

Substituting the value of v from (1), we get

(ii) The radius of the first orbit of the hydrogen atom

To find the value of n for which the radius of the orbit is approximately the same as that of the first Bohr orbit for hydrogen atom, we equate eq. (i) and (ii)

Solution. (i) The transition state of six different photon energies are shown.

Solution. For hydrogen like atom energy of the nth orbit is

For transition n = 4 to n = 3, the frequency is high and hence wavelength is short.

Q.10. It is proposed to use the nuclear fusion reaction

in a nuclear reactor of 200 MW rating. If the energy from the above reaction is used with a 25 per cent efficiency in the reactor, how many grams of deuterium fuel will be needed per day. (The masses of

∴ No. of deuterium atoms required

Number of moles of deuterium atoms

Q.11. A monochromatic point source radiating wavelength 6000 Å, with power 2 watt, an aperture A of diameter 0.1 m and a large screen SC are placed as shown in fig. A photoemissive detector D of surface area 0.5 cm2 is placed at the centre of the screen. The efficiency of the detector for the photoelectron generation per incident photon is 0.9.   (1991 - 2 + 4 + 2  Marks)

(a) Calculate the photon flux at the centre of the screen and the photocurrent in the detector. (b) If the concave lens L of focal length 0.6 m is inserted in the aperture as shown, find the new values of photon flux and photocurrent. Assume a uniform average transmission of 80% from the lens. (c) If the work function of the photoemissive sur face is 1eV, calculate the values of the stopping potential in the two cases (without and with the lens in the aperture).

Solution. Energy of one photon

Power of the source is 2 W or 2 J/s. Therefore, number of photons emitting per second,

At distance 0.6 m, number of photons incident per unit area per unit time :

Area of aperture is,

∴ Total number of photons incident per unit time on the aperture,

The aperture will become new source of light.

Now these photons are further distributed in all directions.

Hence, at the location of detector, photons incident per unit area per unit time :

This is the photon flux at the centre of the screen. Area of detector is 0.5 cm2 or 0.5 × 10–4 m2. Therefore, total number of photons incident on the detector per unit time :

or, photocurrent in the detector :

(b) Using the lens formula :

This is the photon flux at the detector.

New value of photocurrent is :

Q.12. A nucleus X, initially at rest, undergoes alpha decay according to the equation,

(a) Find the values of A and Z in the above process. (b) The alpha particle pr oduced in the above process is found to move in a circular track of radius 0.11 m in a uniform magnetic field of 3 Tesla. Find the energy (In MeV) released during the process and the binding energy of the parent nucleus X.

(b) Let v be the velocity with which α - particle is emitted.

The total kinetic energy of α-particle and Y is

= 5.34 MeV∴ Mass equivalent of this energy

Q.13. Light from a discharge tube containing hydrogen atoms falls on the surface of a piece of sodium. The kinetic energy of the fastest photoelectrons emitted from sodium is 0.73 eV. The work function for sodium is 1.82 eV. Find (1992 - 10  Marks) (a) the energy of the photons causing the photoelectric emission, (b) the quantum numbers of the two levels involved in the emission of these photons, (c) the change in the angular momentum of the electron in the hydrogen atom in the above transition, and (d) the recoil speed of the emitting atom assuming it to be at rest before the transition. (Ionization potential of hydrogen is 13.6 eV)

Solution. (a) The energy of photon causing photoelectric emission= Work function of sodium metal + KE of the fastest photoelectron= 1.82 + 0.73 = 2.55 eV

Let electron jump from n2 to n1 then

Note : The atom was initially at rest the recoil momentum of the atom will be same as emitted photon (according to the conservation of angular momentum).

Q.14. A small quantity of solution containing Na24 radio nuclide (half life = 15 hour) of activity 1.0 microcurie is injected into the blood of a person. A sample of the blood of volume 1 cm3 taken  after 5 hour show an activity of 296 disintegrations per minute. Determine the total volume of the blood in the body of the person. Assume that radioactive solution mixes uniformly in the blood of the person. (1 curie = 3.7 ×1010 disintegrations per second)           (1994 - 6 Marks)

The initial activity can be found by the formula

Q.15. A hydrogen like atom (atomic number Z) is in a higher excited state of quantum number n. The excited atom can make a transition to the first excited state by successively emitting two photons of energy 10.2 and 17.0 eV respectively. 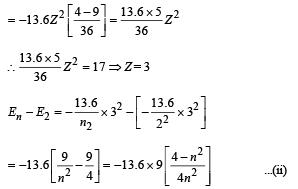 Q.16. An electron, in a hydrogen-like atom, is in an excited state.

The kinetic energy is equal to the magnitude of total energy in this case.

Solution. (i) From the given information, it is clear that half life of the radioactive nuclei is 10 sec (since half the amount is consumed in 10 second. 12.5% is half of 25% pls. note).

Solution.  As nodes are formed at each of the atomic sites, hence

Now, de broglie wavelength is given by

d will be minimum, when