In the preceding chapters we have usually assumed that the forces of action and reaction between contacting surfaces act normal to the surfaces. This assumption is valid only between smooth surfaces.No surface is perfectly smooth, a surface contains microscopic “bumps”. When two surfaces are moving against each other, these bumps interlock against each other and oppose the motion. Friction originates from this opposition.

1. Static Friction : It is the friction experienced by a body when it is at rest or on the verge of motion. Eg – Body resting on an ramp with small inclination 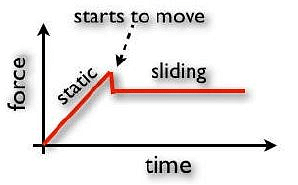 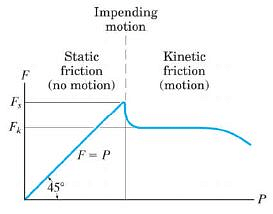 1. When two bodies are in contact, the direction of force of friction on one of them is opposite to the direction in which this body has a tendency to move tangent to the surface.

2. The frictional force is independent of the area of contact of the surfaces.

3. The force of friction is dependent upon the types of materials of the two bodies in contact.

4. The limiting frictional force bears a constant ratio with the normal reaction.

5. When one body is just on the verge of sliding over another body, the force of friction is maximum and this maximum frictional force is called Limiting Static Frictional Force

7. The kinetic frictional force is independent of the relative velocities of the bodies in contact.

When this value is reached, the block is in unstable equilibrium since any further increase in P will cause the block to move. It is experimentally found that friction directly varies as the applied force until the movement produces in the body. 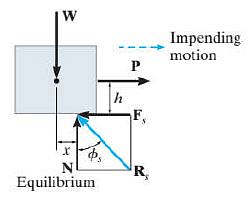 It is defined as the ratio of limiting force of friction (Fs) to the normal reaction (N) between the two bodies. It is constant denoted by µs 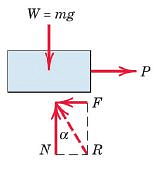 It is defined as the right circular cone with vertex at the point of contact of the two surfaces, axis in the direction of the normal reaction (N) and semi-vertical angle equal to the angle of fiction φ

It is defined as the maximum inclination of a plane at which a body remains in equilibrium over the inclined plane by assistance of friction alone.