Flow Regimes and ModelsThe process of surface irrigation combines the hydraulics of surface flow in the furrows or over the irrigated land with the infiltration of water into the soil profile. The flow is unsteady and varies spatially. The flowat a given section in the irrigated field changes over time and depends upon the soil infiltration behaviour. Performance necessarily depends on the combination of surface flow and soil infiltration characteristics.The Equations describing the hydraulics of surface irrigation are the continuity and momentum equation.These equations are known as the St.Venant equation.In general, the continuity equation expressing the conservation of mass, can be written as:

The momentum equation expressing the dynamic equilibrium of the flow process is:

g - Acceleration due to gravity (m/s²)

So- Longitudinal slope of furrow (m/m)

Q - The discharge (m³/s)These equations are first-order nonlinear partial differential Eq. without a known closed-form solution. Appropriate conversion or approximations of these equations are required. So, several mathematical simulation models (Full hydrodynamic, zero-inertia, kinematic-wave and volume-balance) have been developed, however, among them volume balance models are more commonly used for design. The volume balance models consider only the continuity eq. (31.1) and ignore the momentum eq. (31.2).Empirical Infiltration Equation

Infiltration rate affects surface flow as well as performance of irrigation. Several expressions have been proposed for expressing infiltration rate as a function of elapsed time.31.1.1 The Lewis- KostiakovEquationA widely used empirical expression, for design of surface irrigation system, was originally proposed by Lewis (1937) but was erroneously attributed to Kostiakov. 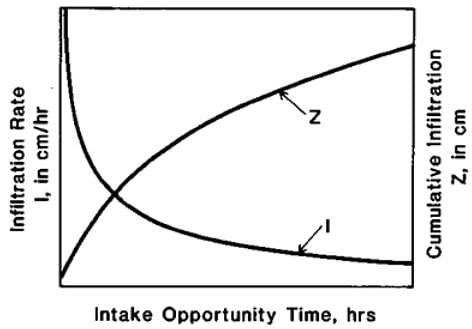 Where, Z= the cumulative depth of infiltration or the volume of water per unit soil surface areat = elapsed time

k and a = empirical parameters

i = the infiltration rate

Infiltration rate never becomes zero instead it reaches a steady state or constant rate condition after a long time. Therefore, the above Eq. was modified to reflect the steady state infiltration rate which may occur during surface irrigation system with longer set times.31.1.2 Modified KostiakovEquation 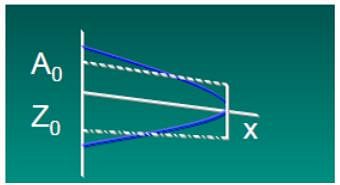 Fig. 31.2.Approximation of sub-surface and surface profiles during volume-balance.

t= the advance time to distance x since beginning of irrigation, min

k and a= coefficients of modified Kostikov’s Eq.

σy =surface storage factor and generally it has a value of 0.77

(31.10)31.3 Advance Time DeterminationWater will be distributed within a surface-irrigated field non-uniformly due to the differential time required for water to cover the field. To account for these differences in the design procedures, it is necessary to calculate the advance trajectory (curve).It is first necessary to describe the flow cross section using two of the following functions:

The basic mathematical model of infiltration utilized in the intake opportunity time determination is the Kostiakov- Lewis relation:

Where,    Z- required infiltrated volume per unit length, m³/m(per furrow or per unit   width are implied)t- The design intake opportunity time, minutea -The constant exponentk - The constant coefficient, m3/mina/m of lengthfo - the basic intake rate, m3/min/m of lengthIn order to express intake as a depth of application, Z must be divided by the unit width. For furrows, the unit width is the furrow spacing, w, while for borders and basins it is 1.0. Values of k, a, fo and w along with the volume per unit length required to refill the root zone, Zreq, are design input data.The volume balance design procedure requires that the intake opportunity time associated with  be known. This time, represented by can be obtained from modified Kostiakov Eq. using the Newton-Raphson procedure.