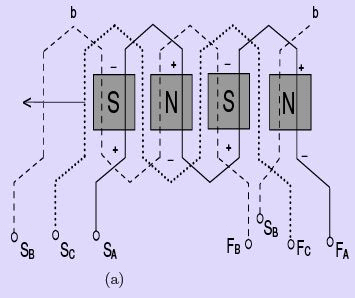 Figure 8: Concentrated three-phase,half-coil wave winding with one slot per phase(one coil side per slot and instantaneous polarity and phase relation of coils)

A three phase winding, in extremely simpliﬁed form, is shown in Fig. 8. The start and ﬁnish of all the coils in phase A are designated, respectively, as SA and FA. Phase A is shown as a solid line in the ﬁgure, phase B as a dashed line, and phase C as a dotted line. Note that each winding does not start and ﬁnish under the same pole. Further, note that the two coil sides of a given coil lie in identical magnetic conditions of opposite polarity.This implies that when seen from the coil terminals, the emfs produced in the two coil sides add up. If we assume that the poles on the rotor are moving to the left as shown, then the relative motion of the armature conductors is to the right. This implies that identical magnetic conditions will be seen by conductors of phase A, followed by phase C, followed by phase B. The induced emfs in phases A,C and B may be said to produce a phase sequence of ACBACBA.The time interval between two phases to achieve identical magnetic conditions would depend on the relative speed of motion, and on the spatial seperation of the phases. In Fig 8, the phases are so laid out that each phase is seperated from another by 120 electrical degrees (360◦ being deﬁned by the distance to achieve identical magnetic conditions).

The winding depicted in Fig. 8 is an open winding since both ends of the windings have been brought out for suitable connections. It is a wave winding since it progresses from pole to pole. It is a concentrated winding because all the coils of one phase are concentrated in the same slot under one pole. It is a half-coil winding because there is only one-half of a coil (one coil side) in each slot. It is a full-pitch winding because the coil sides of one coil are 180◦ electrical degrees apart i.e., they lie under identical magnetic conditions, but of opposite polarity under adjacent poles.

Fig. 9, on the other hand shows the coils of a single phase,(A, in this case) distributed winding distributed over two slots under each pole.

Half-coil (also called single-layer) windings are sometimes used in small induction motor stators and in the rotors of small wound-rotor induction motors. A cross section of a half-coil, single-layer winding is shown in Fig. 9(c)(i). Like the dc dynamo armature windings, most commercial armatures for ac synchronous generators are of the full or wholecoil two-layer type, shown in cross section at the right in Fig. 9(c)(ii). The whole-coil, two-layer winding gets its name from the fact that there are two coil sides (one coil) per slot.Fig. 9(a) shows a single-layer, half-coil lap windings;Fig. 9(b) shows a double-layer, full-coil lap winding. A cross section of a single layer (half-coil) winding is shown in Fig. 9(c)(i) be shown later, fractional-pitch windings, when used in ac synchronous and asynchronous generator armatures, in addition to saving copper, (1) reduce the MMF harmonics produced by the armature winding and (2) reduce the EMF harmonics induced in the windings, without reducing the magnitude of the fundamental EMF wave to a great extent. For the three reasons cited, fractional-pitch windings are almost universally used in ac synchronous generator armatures. 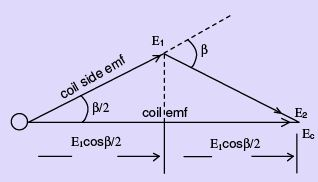 In the case of an ac generator using a full-pitch coil, such as that shown in Fig. 8, the two coil sides span a distance exactly equal to the pole pitch of 180 electrical degrees. As a result, the EMFs induced in a full-pitch coil are such that the coil side EMFs are in phase, as shown in Fig. 10. The total coil voltage Ec is 2E1 , if E1 is the emf induced in a coil-side.

In the case of the two-layer winding shown in Fig. 9(b), note that the coil span of single coil is less than the pole span of 180 electrical degrees. The EMF induced in each coil side is not in phase, and the resultant coil voltage Ec would be less than the arithmetic sum of the EMF of each coil side, or less than 2E1. It is obvious that 2E1 must be multiplied by a factor,kp, that is less than unity, to get the proper value for coil voltage Ec (or Ec = 2E1 kp).The pitch factor kp is given by

The pitch factor may be quantiﬁed in terms of angles as follows. If we assume that the induced EMFs of two coils, E1 and E2 , are out of phase with respect to each other by some angle β as shown in Fig. 11, then the angle between E1 and the resultant coil voltage Ec is

(8)The angle β is 1800 minus the number of electrical degrees spanned by the coil, for a shortpitched coil. For a full pitched coil, therefore, kp = 1 as β = 0.

Since β is the supplementary of the coil span, the pitch factor kp may also be expressed as

(9)where p0 is the span of the coil in electrical degrees.

It is sometimes convenient to speak of an armature coil span as having a fractional pitch expressed as a fraction e.g.,

The pitch factor kp is still computed as in Eqn. 9. Over pitched coils are not normaly used in practice as there is an increased requirement of copper wire without any additional advantage.

Relation between Electrical and Mechanical Degrees of Rotation

The windings shown in Fig. 8 and Fig. 9(b) are called concentrated windings because all the coil sides of a given phase are concentrated in a single slot under a given pole. For Fig. 8., in determining the induced ac voltage per phase, it would be necessary only to multiply the voltage induced in any given coil by the number of series-connected coils in each phase. This is true for the winding shown in Fig. 8 because the conductors of each coil, respectively, lie in the same position with respect to the N and S poles as other series coils in the same phase. Since these individual coil voltages are induced in phase with each other, they may be added arithmetically. In otherwords, the induced emf per phase is the product of the emf in one coil and the number of series connected coils in that phase.

Concentrated windings in which all conductors of a given phase per pole are concentrated in a single slot, are not commercially used because they have the following disadvantages,

1. They fail to use the entire inner periphery of the stator iron eﬃciently.

2. They make it necessary to use extremely deep slots where the windings are concentrated. This causes an increase in the mmf required to setup the airgap ﬂux.

3. The eﬀect of the second disadvantage is to also increase the armature leakage ﬂux and the armature reactance.

4. They result in low copper-to-iron ratios by not using the armature iron completely.

5. They fail to reduce harmonics as eﬀectively as distributed windings.

For the ﬁve reasons just given, it is more advantageous to distribute the armature winding, using more slots and a uniform spacing between slots, than to concentrate the windings in a few deep slots.

When the slots are distributed around the armature uniformly, the winding that is inserted is called a distributed winding. A distributed lap winding is shown in Fig. 12.Note that two coils in phase belt A are displaced by one slot angle (the angular displacement between two successive slots) with respect to each other. The induced voltages of each of these coils will be displaced by the same degree to which the slots have been distributed, and the total voltage induced in any phase will be the phasor sum of the individual coil voltages.

For an armature winding having four coils distributed over say, 2/3 rd of a pole-pitch, in four slots, the four individual coil side voltages are represented by phasors in Fig. 13 as displaced by some angle α, the number of electrical degrees between adjacent slots, known as slot angle. It is 300 for the case of 4 slots per phase belt. Voltages Ec1, Ec2, etc., are the individual coil voltages, and n is the number of coils in a given phase belt, in general.

For a machine using n slots for a phase belt, the belt or distribution factor kd by which the arithmetic sum of the individual coil voltages must be multiplied in order to yield the phasor sum is determined by the following method,

As in the case of Eqn. 12., the computation of kd in terms of voltages (either theo- retical or actual) is impractical. The construction of Fig. 13 in which perpendiculars have been drawn to the center of each of the individual coil voltage phasors to a common center of radius ’r’ (using dashed lines) serves to indicate that α/2 is the angle BOA. Coil side voltage AB equals OA sin α/2, and coil voltage represented by chord AC equals 2OA sin α/2. For n coils in series per phase, chord AN , is also 2OA sin nα/2, and the distribution or belt factor kd is

Generated EMF in a Synchronous Generator

(12)But Faraday’s law Sec. ?? states that the average voltage induced in a single turn of two coil sides is

where φ is the number of lines of ﬂux (in Webers) per pole, Nc is number of turns per coil, s is the relative speed in revolutions/second (rps) between the coil of Nc turns and the magnetic ﬁeld φ.A speed s of 1 rps will produce a frequency f of 1 Hz. Since f is directly proportional and equivalent to s, (for a 2-pole generator) replacing the latter in Eqn. 14, for all the series turns in any phase,

But Eqn. 16 is still not representative of the eﬀective value of the phase voltage generated in an armature in which fractional-pitch coils and a distributed winding are employed.Taking the pitch factor kp and the distribution factor kd into account, we may now write the equation for the eﬀective value of the voltage generated in each phase of an AC synchronous generator as