The document System Of Linear Equations JEE Notes | EduRev is a part of the JEE Course Mathematics (Maths) Class 12.
All you need of JEE at this link: JEE

Remember that if a given system of linear equations have Only Zero Solution for all its variables thenthe given equations are said to have Trivial Solution.

Then the above system can be expressed in the matrix form as AX = B.The system is said to be consistent if it has atleast one solution.

(i) System of Linear Equations And Matrix Inverse :If the above system consist of n equations in n unknowns, then we have AX = B where A is asquare matrix. If A is non–singular, solution is given by X = A–1B.If A is singular, (adj A) B = 0 and all the columns of A are not proportional, then the system hasinfinitely many solutions.If A is singular and (adj A) B

0, then the system has no solution (we say it is inconsistent).

(ii) Homogeneous System and Matrix Inverse :If the above system is homogeneous, n equations in n unknowns, then in the matrix form it isAX = O. (

(iii) Elementary Row Transformation of Matrix :The following operations on a matrix are called as elementary row transformations.(a) Interchanging two rows.(b) Multiplications of all the elements of row by a nonzero scalar.(c) Addition of constant multiple of a row to another row.

Note : Similar to above we have elementary column transformations also.

Remark : Two matrices A & B are said to be equivalent if one is obtained from other using elementarytransformations. We write A ~ B.

(iv) Echelon Form of A Matrix : A matrix is said to be in Echelon form if it satisfies the following(a) The first non-zero element in each row is 1 & all the other elements in the correspondingcolumn (i.e. the column where 1 appears) are zeroes.(b) The number of zeros before the first non zero element in any non zero row is less thanthe number of such zeroes in succeeding non zero rows.

(v) System of Linear Equations : Let the system be AX = B where A is an m × n matrix, X isthe n–column vector & B is the m–column vector. Let [AB] denote the augmented matrix (i.e.matrix obtained by accepting elements of B as n + 1th column & first n columns are that of A). 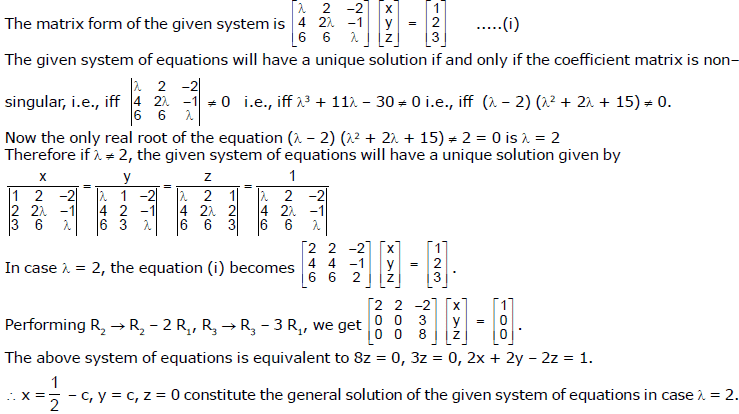 And we see that the system has an infinite number of solutions. Specific solutions can be generated bychoosing specific values for k.

by reducing the augmented matrix of the system to reduced row echelon form.

It is easy to see that x1 = 1, x2 = –3, x3 = 6. The process of solving a system by reducinthe augmented matrix to reduced row echelon form is called Gauss–Jordan elimination.

Ex.30 Determine conditions on a, b and c so that

will have no solutions or have an infinite number of solution.

J. INVERSE OF A MATRIX(i) Singular & Non Singular Matrix : A square matrix A is said to be singular or non–singular according as |A| is zero or non–zero respectively.

Ex.31 Show that every skew-symmetric matrix of odd order is singular.

(iii) Properties of Cofactor A and adj A :

(iv) Inverse of A Matrix (Reciprocal Matrix) : Let A be a non–singular matrix. Then the matrix

Ex.32 Find the adjoint of the matrix A =

be the direction cosines of three mutually perpendicular lines referred to an orthogonal Cartesian co–ordinate system, then prove that

is an orthogonal matrix.

Ex.36 Obtain the characteristic equation of the matrix A =

and verify that it is satisfied y A and hence find its inverse.

Ex.37 Find the inverse of the matrix A = Ex.38 If a non-singular matrix A is symmetric, show that A–1 is also symmetric.