Tacheometry or telemetry is a branch of angular surveying in which the horizontal and vertical distances of points are obtained by optical means as opposed to the ordinary slower process of measurements by tape or chain.

Tacheometry (from Greek, quick measure), is a system of rapid surveying, by which the positions, both horizontal and vertical, of points on the earth surface relatively to one another are determined without using a chain or tape or a separate leveling instrument.

Uses of TacheometryThe tacheometric methods of surveying are used with an advantage over the direct methods of measurement of horizontal distances and differences in elevations.Some of the uses are:

Different types of stadia hairs are shown below

Methods of Tachometric SurveyVarious methods of tacheometry survey are based on the principle that the horizontal distance between an instrument Station “A” and a staff station “B” depending on the angle subtended at point “A” by a known distance at point “B” and the vertical angle from point “B” to point “A” respectively.This principle is used in different methods in different ways.Mainly there are two methods of tachometry survey:

(a) Principle of Stadia Hair Method

(b) Horizontal Line of Sight

Consider the figure, in which O is the optical center of the objective of an external focusing telescope. 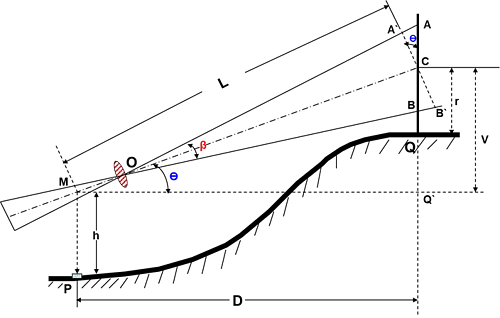 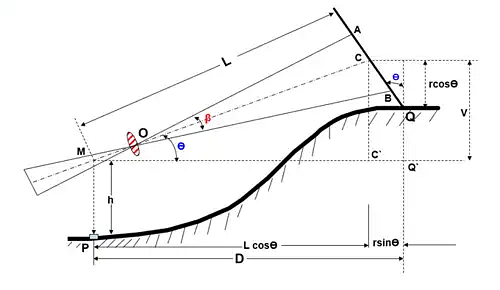 (ii) Movable Hair Method (Subtense Method)In the movable Hair method of tacheometric surveying, the instrument used for taking observations consist of a telescope fitted with stadia hairs which can be moved and fixed at any distance from the central hair (within the limits of the diaphragm).The staff used with this instrument consists of two targets (marks) at a fixed distance apart (say 3.4 mm).The Stadia interval which is variable for the different positions of the staff is measured, and the horizontal distance from the instrument station to the staff station is computed.Note: Out of the two methods mentioned above of tacheometric surveying, the “fixed hair method “is widely employed.

Case 1: When both angles are above the horizontal line of sight 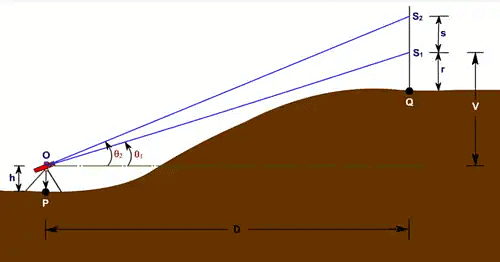 Case 2: When both angles are below the horizontal line of sight 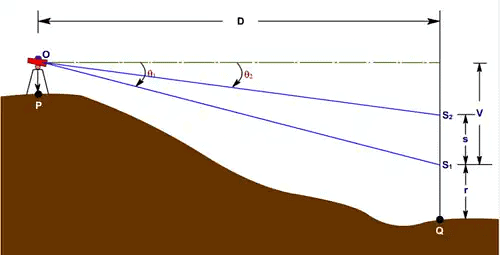 Therefore R.L. of Q = (R.L. of P + h) - V – rwhere h is the height of the instrument, r is the staff reading corresponding to the lower vane.