The document The Direct Stiffness Method: Truss Analysis - 2 GATE Notes | EduRev is a part of the GATE Course Structural Analysis.
All you need of GATE at this link: GATE The nodes of the truss member be identified by 1 and 2. Let u'1 and u'2 be the displacement of nodes 1 and 2 in local co ordinate system. In global co ordinate system, each node has two degrees of freedom. Thus, u1 , v2 and u2, v2 are the nodal displacements at nodes 1 and 2 respectively along x - and y- directions. Let the truss member be inclined to x axis by θ as shown in figure. It is observed from the figure that u'1 is equal to the projection of u1 on x' axis plus projection of v1 on x' -axis. Thus, (vide Fig. 24.7)

Introducing direction cosines l = cos θ ; m = sin θ the above equation is written as 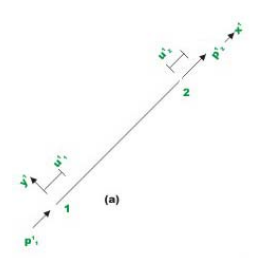 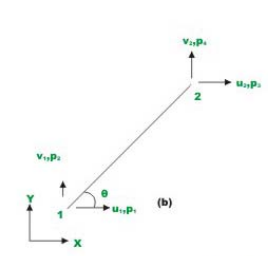 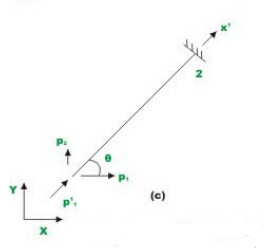 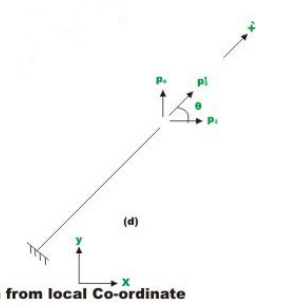 Making use of the equation (24.10b), the above equation may be written as

Each component of the member stiffness matrix kij [k] in global co-ordinates represents the force in x -or y-directions at the end i required to cause a unit displacement along  x − or y − directions at end j . 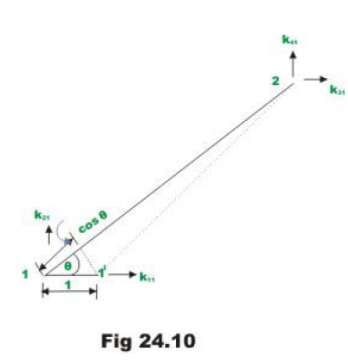 This force may be resolved along u1 and u2 directions. Thus horizontal component of force

The forces at the node 2 are readily found from static equilibrium. Thus,