As discussed in the case of statically indeterminate beams, the reactions are induced in the case of indeterminate frame due to yielding of supports even when there are no external loads acting on it. The yielding of supports may be either linear displacements or rotations of supports (only in the case of fixed supports) .The compatibility condition is that the total displacement of the determinate frame (primary structure) due to external loading and that due to redundant reaction at a given support must be equal to the predicted amount of yielding at that support. If the support is unyielding then it must be equal to zero. 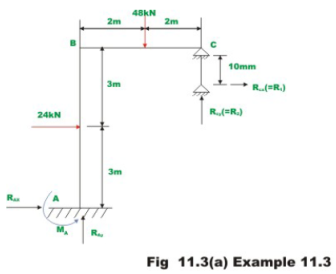 This problem is similar to the previous example except for the support settlement .Hence only change will be in the compatibility equations. The released structure is as shown in Fig.11.3b .The deflections (ΔL)1 and (ΔL)2  at C in the primary structure due to external loading has already been computed in the previous example. Hence,

The flexibility coefficients are,

Now, the compatibility equations may be written as

The reactions are shown in Fig.11.3c.

Example 11.4 Compute the reactions of the rigid frame shown in Fig.11.4a and draw bending moment diagram .Also sketch the deformed shape of the frame. Assume EI to be constant for all members. 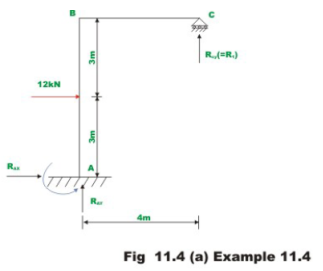 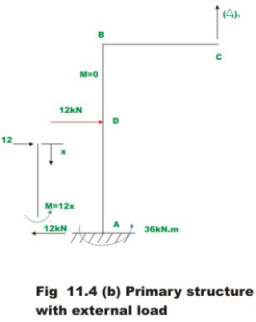 Select vertical reaction at C, R1 as the redundant .Releasing constraint against R1 redundant, the primary structure is obtained. It is shown in Fig.11.4b.

The deflection (ΔL)1 in the primary structure due to external loading can be calculated from unit load method.

The remaining reactions are calculated from static equilibrium equations. They are shown in Fig.11.4d along with the bending moment diagram. 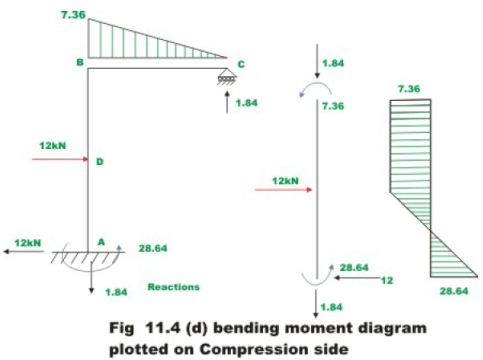 Now using the principle of superposition, the actual rotations and displacements at the joints may be obtained.

The qualitative elastic curve is shown in Fig. 11.4h. In this lesson, the statically indeterminate plane frames are analysed by force method. For the purpose of illustrations only bending deformations of the frame are considered as the axial deformations are very small. The problem of yielding of supports in the case of plane frames is also discussed. The procedure to draw qualitative elastic curve of the frame is illustrated with the help of typical example. The bending moment and shear force diagrams are also drawn for the case of plane frame.