The document The Himalayas - An Introduction UPSC Notes | EduRev is a part of UPSC category.
All you need of UPSC at this link: UPSC

INTRODUCTIONThe Himalaya, a term coined by the ancient people of India which means ‘abode of snow’. The Himalayas continue to inspire awe and wonder in man. From being the home of beautiful hill stations, alpine forests, meadows and animals such as the elusive snow leopard and the magnificent markhor, the Himalayas also serve economic, geographic and geopolitical interests as evident from the recent India-China military stand-off in the western Himalayas. The Himalayas are the youngest and the loftiest mountain chain in the world. 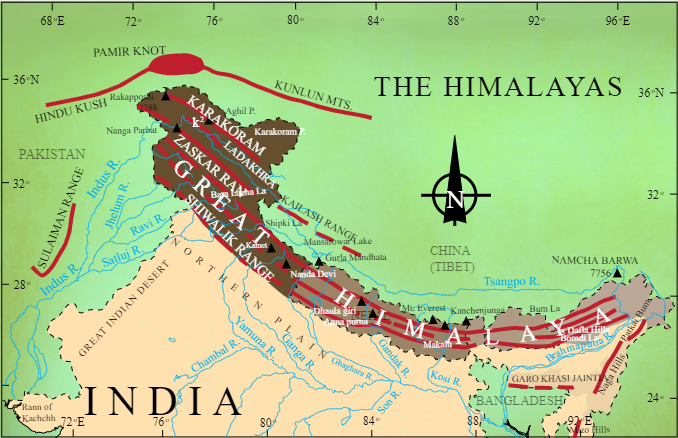 EXTENTFrom the Pamirs (roof of the world), which is the connecting link between the Himalayas and high ranges of Central Asia, the Himalayas extend eastward as an arcuate curve which is convex to the south. It extends from the peak of the Nanga Parbat in the west to the summit of Namcha Barwa in the east. The southern boundary is well defined by the foothills and the northern boundary is obscure and merges with the Tibet Plateau. The Extent of the Himalayas

CHARACTERISTICS OF THE HIMALAYAS

ORIGIN OF THE HIMALAYASIt is believed that the Himalayan mountains have come out of a great geosyncline called the Tethys sea and that the upliftment had taken place in different phases.

Geosyncline - It is a linear trough of subsidence of the Earth's crust within which vast amounts of sediment accumulate. The filling of a geosyncline with thousands or tens of thousands of feet of sediment is accompanied in the late stages of deposition by folding, crumpling, and faulting of the deposits. 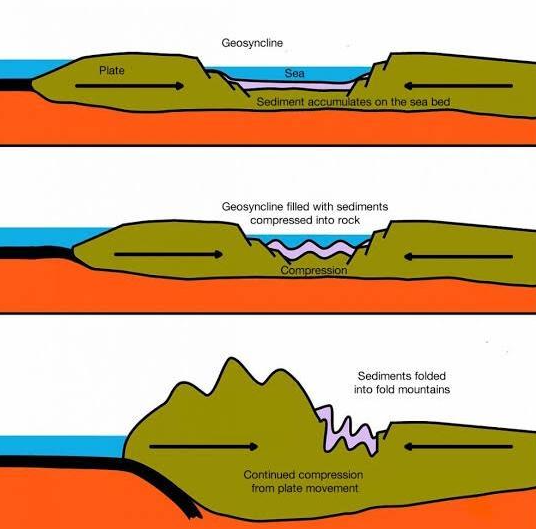 Question 1:Which among the following is/are the characteristic features of the Himalayas?
1. High altitude
2. Gentle gradient
3. Deeply dissected Topography
4. Senile Drainage
Choose the correct options from the codes given below:
Explanation

It is characterised by Deep gradient and Youthful drainage. Hence options 2 and 4 are wrong.

CHRONOLOGY OF ORIGINAbout 120 million years ago, there was a supercontinent known as Pangea whose northern part consisted of the present North America and Eurasia (Europe and Asia) which was called Laurasia or Angaraland. The southern part consisted of South America, Africa, South India, Australia and Antarctica. This landmass was called Gondwanaland. In between Laurasia and Gondwanaland, there was a long, narrow and shallow sea known as the Tethys Sea. 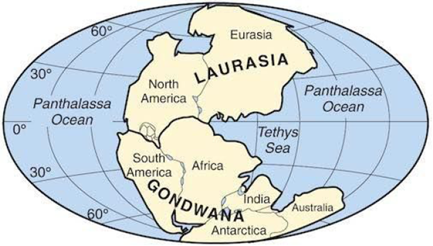 Pangea and its subdivisions

Sediments were brought by the rivers from these landmasses and deposited in the bed of this sea. The sediments were subjected to powerful compression, which might have been due to the southward movement of Angaraland or the northward movement of Gondwanaland. The sediments in the Tethys sea were squeezed and crushed and a series of folds were formed one behind the other giving birth to the highest relief feature on Earth- THE HIMALAYAS.The curved shape of the Himalayas convex to the south is the outcome of the maximum push offered at the two ends of the Indian Peninsula (in the northwest by the Aravali and in the northeast by Assam ranges) during its northward drift. Studies have shown that India is moving northwards at the rate of 5cm per year and crashing into the rest of Asia.The first phase of the Himalayan formation (Greater Himalayas) commenced about 120 million years ago. The second phase took place about 25 to 30 million years ago (Middle Himalayas). The last phase of the Himalayan orogeny (Shiwaliks) took place around 2-20 million years ago. 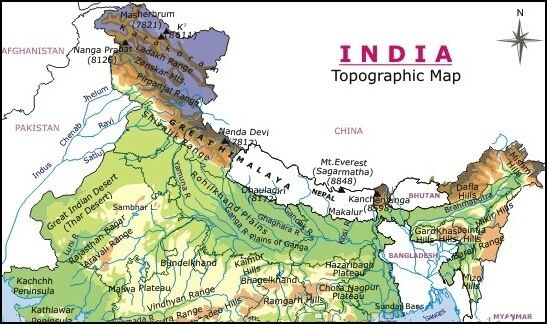 The diastrophic movement that helped in Himalayan formation started in the late Cretaceous time and continued through the Eocene, Middle Miocene, Pliocene to the Lower Pliocene and finally into the upper Pleistocene to sub-recent times. However, the process of upliftment of the Himalayas is not yet complete.

Question 2:The supercontinent suggested by Wegener was referred to as :
Explanation

Pangea was the supercontinent suggested by Alfred Wegener. Hence b is the correct option.