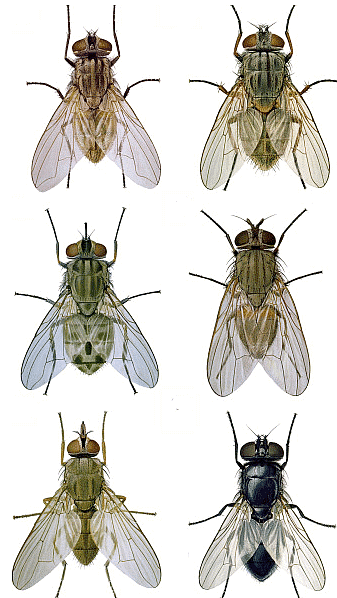 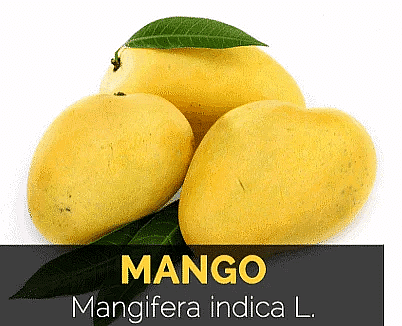 According to the international code for botanical nomenclature (ICBN), the first word denoting the genus starts with a capital letter while the specific epithet starts with a small letter. 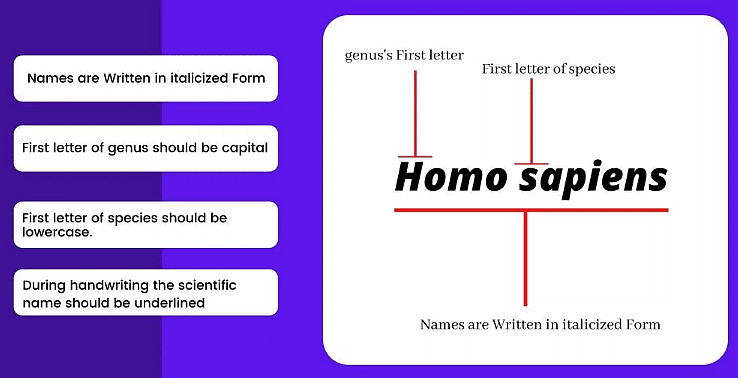 Option a,b and c are considered under the rules of ICBN.

Q.4. The contrasting characteristics generally in a pair used for identification of animals in Taxonomic key are referred to as:   [ NEET 2019]

Correct answer is option (b)

Key is a taxonomical aid used for identification of plants and animals based on the similarities and dissimilarities. The keys are based on the contrasting characters generally in a pair called couplet.

Q.5. Match the items given in Column I with those in column II and select the correct option given below.     [NEET 2018] 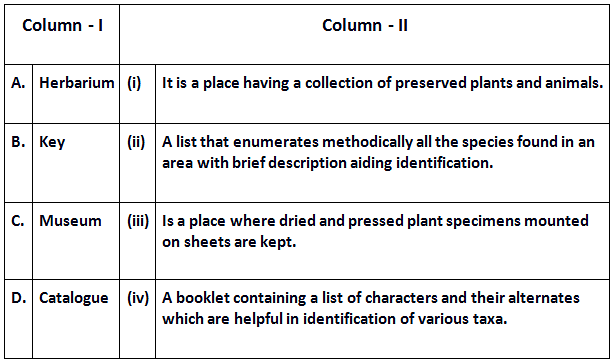 (a) Date of collection

(b) Name of collector

(d) Height of the plant

Q.7. Match column I with column II for housefly classification and select the correct option using the codes given below.     [NEET 2016] 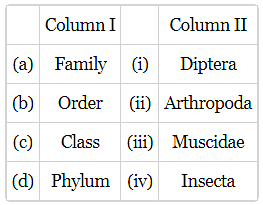 The housefly (Musca domestica) is an Arthropoda (Phylum) and is classified under Class Insecta. Its taxonomy is as below:

Q.8. Study the four statements (A - D) given below and select the two correct ones out of them.

(A) Definition of biological species was given by Ernst Mayr.

(B) Photoperiod does not affect reproduction in plants.

(C) Binomial nomenclature system was given by R.H. Whittaker.

(D) In unicellular organisms, reproduction is synonymous with growth.

Photoperiod affects the reproduction in plants by regulating the flowering timing of the plants. The binomial system of nomenclature was given by Carolus Linnaeus. R. H. Whittaker proposed 5 kingdom classification of living organisms.

Q.9. Nomenclature is governed by certain universal rules. Which one of the following is contrary to the rules of nomenclature?     [NEET 2016]

(a) Biological names can be written in any language.

(b) The first word in a biological name represents the genus name, and the second is a specific epithet.

(c) The names are written in Latin and are italicized when printed.

(d) When written by hand, the names are to be underlined.

Binomial nomenclature (also known as binary nomenclature) is a formal system for naming living things that consists of two parts (Genus & Species), both of which should be written in Latin grammatical forms.

(a) It is easier to carry small body weight.

(b) Smaller animals have a higher metabolic rate.

(d) The efficiency of muscles in large animals is less than in small animals.

NCERT Reference: The Introduction to the “Living” of chapter 1 of NCERT

The document NEET Previous Year Questions (2016-21): The Living World Notes | Study Biology Class 11 - NEET is a part of the NEET Course Biology Class 11.
All you need of NEET at this link: NEET
Join Course