In lessons 17 and 21, rigid frames having single independent member rotational

degree of freedom (or joint translation Δ) is solved using slopedeflection and moment-distribution method respectively. However multistory frames usually have more than one independent rotational degree of freedom. Such frames can also be analysed by slope-deflection and moment-distribution methods. Usually number of independent member rotations can be evaluated by inspection. However if the structure is complex the following method may be adopted. Consider the structure shown in Fig. 22.1a. Temporarily replace all rigid joints of the frame by pinned joint and fixed supports by hinged supports as shown in Fig. 22.1b. Now inspect the stability of the modified structure. If one or more joints are free to translate without any resistance then the structure is geometrically unstable. Now introduce forces in appropriate directions to the structure so as to make it stable. The number of such externally applied forces represents the number of independent member rotations in the structure. In the modified structure Fig. 22.1b, two forces are required to be applied at level CD and level BF for stability of the structure. Hence there are two independent member rotations (ψ) that need to be considered apart from joint rotations in the analysis. 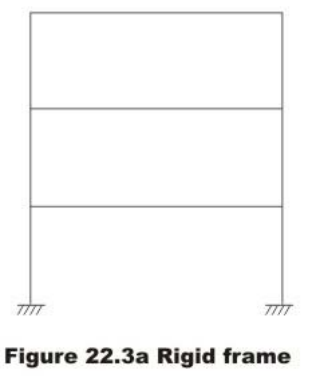 For the two story frame shown in Fig. 22.5, there are four joint rotations (θB, θC, θD and θE) and two independent joint translations (sidesway) Δ1 at the level of CD and Δ2 at the level of BE. Six simultaneous equations are required to evaluate the six unknowns (four rotations and two translations). For each of the member one could write two slope-deflection equations relating beam end moments to (i) externally applied loads and (ii) displacements (rotations and translations). Four of the required six equations are obtained by considering the moment equilibrium of joint B, C, D and E respectively. For example,

The other two equations are obtained by considering the force equilibrium of the members. Thus, the shear at the base of all columns for any story must be equal to applied load. Thus ∑ Fx = 0 at the base of top story gives (ref. Fig. 22.6)

Similarly ∑ Fx = 0 at the base of frame results in

Thus we get six equations in six unknowns. Solving the above six equations all the unknowns are evaluated. The above procedure is explained in example 22.1. 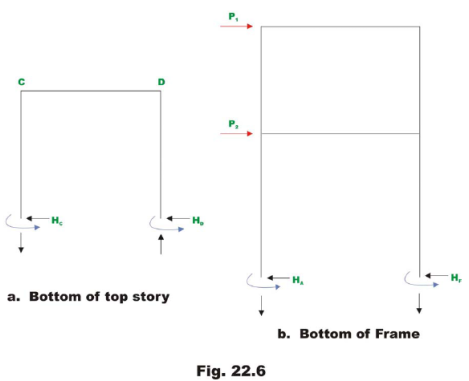 Analyse the two story rigid frame shown in Fig. 22.7a by the slope-deflection method. Assume EI to be constant for all members. 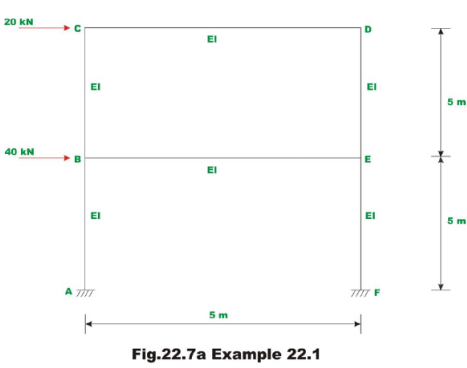 In this case all the fixed end moments are zero. The members AB and EF undergo rotations 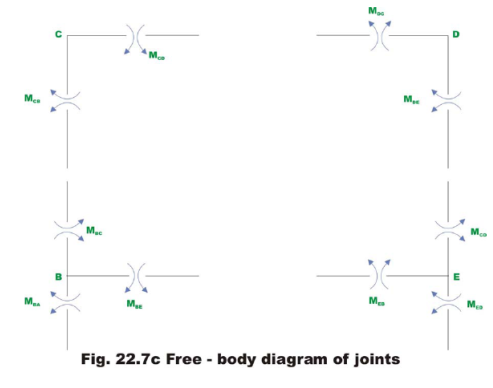 Substituting the beam end moments from equation (1) in (2) and (5) the required equations are obtained. Thus,

Substituting the above values of rotations and translations in equation (1) beam end moments are evaluated. They are,