1) The system shown in Fig. 22.8b, where in the sidesway is completely prevented by introducing two supports at E and D. All external loads are applied on this frame.

3) Structure shown in Fig. 22.8d, the support D is locked against sidesway and joints B and E are allowed to displace horizontally by removing the support at E . Calculate fixed end moments in column AB and EF for an arbitrary sideswayΔ'2 as  shown the in figure. Since joint displacement as known beforehand, one could use the moment-distribution method to analyse the frame. 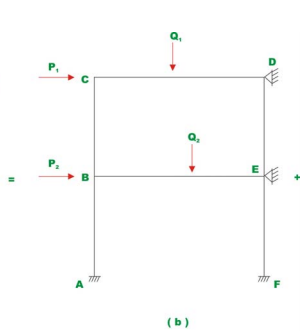 All three systems are analysed separately and superposed to obtain the final answer. Since structures 22.8c and 22.8d are analysed for arbitrary sidesway Δ'1 and Δ'2 respectively, the end moments and the displacements of these two analyses are to be multiplied by constants k1 and k2 before superposing with the results obtained in Fig. 22.8b. The constants k1 and k2 must be such that

From similar reasoning, from Fig. 22.10, one could write,

Solving the above two equations, k1 and k2 are calculated. 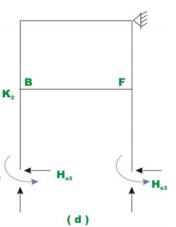 Example 22.2Analyse the rigid frame of example 22.1 by the moment-distribution method.

Solution:First calculate stiffness and distribution factors for all the six members. 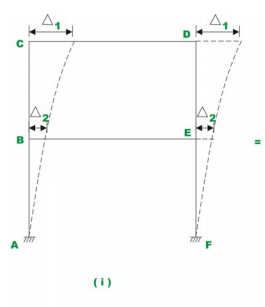 Now moment-distribution is carried out to obtain the balanced end moments. The whole procedure is shown in Fig. 22.11b. Successively joint ,, BCD and E are released and balanced. 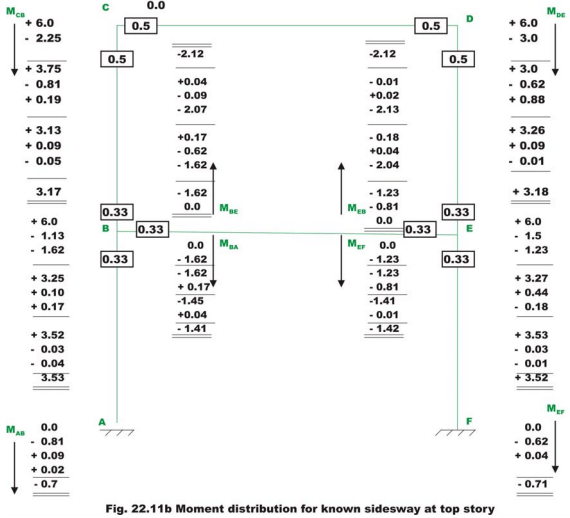 From the free body diagram of the column shown in Fig. 22.11c, the horizontal forces are calculated. Thus, 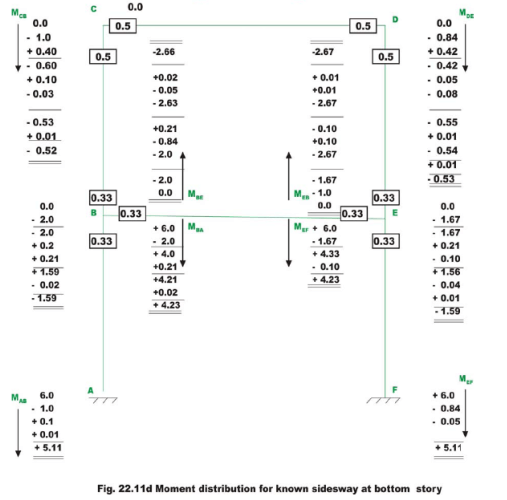 From the free body diagram of the column shown in Fig. 22.11e, the horizontal forces are calculated. Thus, 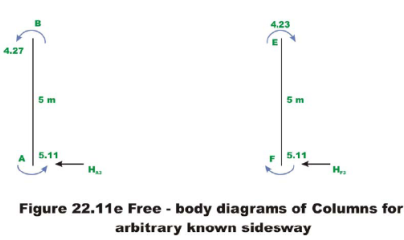 Thus the final moments are,

A procedure to identify the number of independent rotational degrees of freedom of a rigid frame is given. The slope-deflection method and the momentdistribution method are extended in this lesson to solve rigid multistory frames having more than one independent rotational degrees of freedom. A multistory frames having side sway is analysed by the slope-deflection method and the moment-distribution method. Appropriate number of equilibrium equations is written to evaluate all unknowns. Numerical examples are explained with the help of free-body diagrams.