In this module first two methods are discussed and direct stiffness method is treated in the next module. All displacement methods follow the above general procedure. The Slope-deflection and moment distribution methods were extensively used for many years before the compute era. After the revolution occurred in the field of computing only direct stiffness method is preferred. 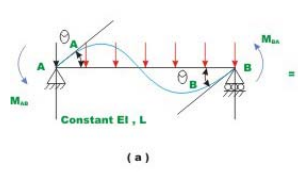 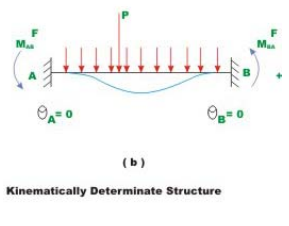 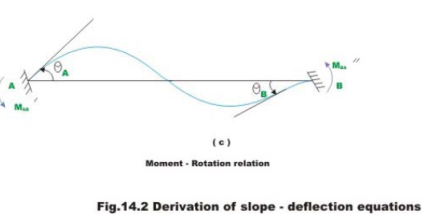 Hence in plane structures, each node can have at the most one linear displacement and one rotation. In this module first slope-deflection equations as applied to beams and rigid frames will be discussed.

In this lesson the slope-deflection equations are derived for the case of a beam with unyielding supports .In this method, the unknown slopes and deflections at nodes are related to the applied loading on the structure. As introduced earlier, the slope-deflection method can be used to analyze statically determinate and indeterminate beams and frames. In this method it is assumed that all deformations are due to bending only. In other words deformations due to axial forces are neglected. As discussed earlier in the force method of analysis compatibility equations are written in terms of unknown reactions. It must be noted that all the unknown reactions appear in each of the compatibility equations making it difficult to solve resulting equations.The slope-deflection equations are not that lengthy in comparison. The slope-deflection method was originally developed by Heinrich Manderla and Otto Mohr for computing secondary stresses in trusses. The method as used today was presented by G.A.Maney in 1915 for analyzing rigid jointed structures.

Consider a typical span of a continuous beam AB as shown in Fig.14.1.The beam has constant flexural rigidity EI and is subjected to uniformly distributed loading and concentrated loads as shown in the figure. The beam is kinematically indeterminate to second degree. In this lesson, the slope-deflection equations are derived for the simplest case i.e. for the case of continuous beams with unyielding supports. In the next lesson, the support settlements are included in the slope-deflection equations.

For this problem, it is required to derive relation between the joint end moments MAB and MBA in terms of joint rotations θA and θB and loads acting on the beam .Two subscripts are used to denote end moments. For example, end moments Mab denote moment acting at joint A of the member AB. Rotations of the tangent to the elastic curve are denoted by one subscript. Thus, θA denotes the rotation of the tangent to the elastic curve at A. The following sign conventions are used in the slope-deflection equations (1) Moments acting at the ends of the member in counterclockwise direction are taken to be positive. (2) The rotation of the tangent to the elastic curve is taken to be positive when the tangent to the elastic curve has rotated in the counterclockwise direction from its original direction. The slope-deflection equations are derived by superimposing the end moments developed due to (1) applied loads (2) rotation θA (3) rotation θB. This is shown in Fig. 14.2 (a)-(c). In Fig. 14.2(b) a kinematically determinate structure is obtained. This condition is obtained by modifying the support conditions to fixed so that the unknown joint rotations become zero. The structure shown in Fig.14.2 (b) is known as kinematically determinate structure or restrained structure. For this case, the end moments are denoted by

The fixed end moments are evaluated by force-method of analysis as discussed in the previous module. For example for fixed- fixed beam subjected to uniformly distributed load, the fixed-end moments are shown in Fig.14.3. The fixed end moments are required for various load cases. For ease of calculations, fixed end forces for various load cases are given at the end of this lesson. In the actual structure end A rotates by θA and end B rotates by θB. Now it is required to derive a relation relating θA and θB with the end moments M'AB and M'BA. Towards this end, now consider a simply supported beam acted by moment M'AB at A as shown in Fig. 14.4. The end moment M’AB deflects the beam as shown in the figure. The rotations θ'A and θ'B are calculated from moment-area theorem.

Now combining these two relations, we could relate end moments acting at A and B to rotations produced at A and B as (see Fig. 14.2c)

Solving for M′AB and M′BA  in terms of θA and θB ,

Now writing the equilibrium equation for joint moment at A (see Fig. 14.2).

Sometimes one end is referred to as near end and the other end as the far end. In that case, the above equation may be stated as the internal moment at the near end of the span is equal to the fixed end moment at the near end due to external loads plus 2EI/L times the sum of twice the slope at the near end and the slope at the far end. The above two equations (14.7a) and (14.7b) simply referred to as slope–deflection equations. The slope-deflection equation is nothing but a load displacement relationship.