A continuous beam is shown in Fig.12.1a. Since, three moment equation relates moments at three successive supports to applied loading on adjacent spans, consider two adjacent spans of a continuous beam as shown in Fig.12.1b. ML, MC and MR respectively denote support moments at left, center and right supports. The moments are taken to be positive when they cause tension at bottom fibers. The moment of inertia is taken to be different for different spans. In the present case IL, and IR denote respectively moment of inertia of; left and right support and  IL, and IR are the left and right span respectively. It is assumed that supports are unyielding. The yielding of supports could be easily incorporated in three-moment equation, which will be discussed in the next lesson. Now it is required to derive a relation between ML, MC and MR . This relationship is derived from the fact that the tangent to the elastic curve at C is horizontal. In other words the joint C may be considered rigid. Thus, the compatibility equation is written as,

Note that the actual moment diagram on span LC is broken into two parts (1) due to loads applied on span LC when it is considered as a simply supported beam and, (2) due to support moments. In the above equation AL and AR denote respectively area of the bending moment diagrams due to applied loads on left and right supports. xL and xR denote their respective C.G.(center of gravity) distances from the left and right support respectively. Similarly,

which could be simplified to,

The above equation (12.5) is known as the three-moment equation. It relates three support moments ML, MC and MR with the applied loading on two adjacent spans. If in a span there are more than one type of loading (for example, uniformly distributed load and a concentrated load) then it is simpler to calculate moment diagram separately for each of loading and then to obtain moment diagram. 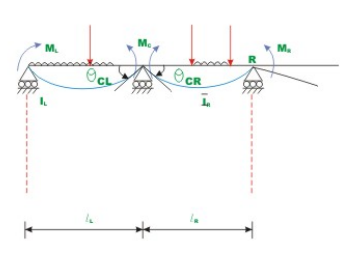