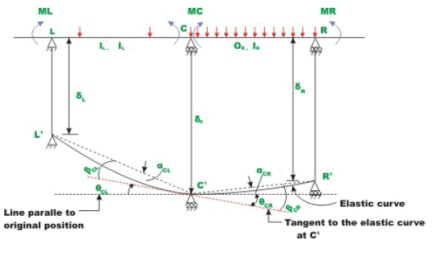 The rotations βCL and βCR due to external loads and support moments are calculated from the M/EI diagram .They are (see lesson 12)

The above equation relates the redundant support moments at three successive spans with the applied loading on the adjacent spans and the support settlements.

Example 13.1Draw the bending moment diagram of a continuous beam BC shown in Fig.13.2a by three moment equations. The support B settles by 5mm below A and C . Also evaluate reactions at A , B and C .Assume EI to be constant for all members and E = 200 GPa , I = 8x106 mm4 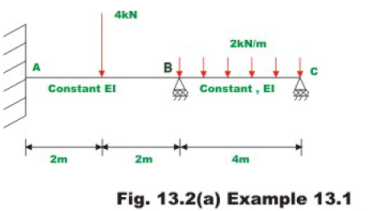 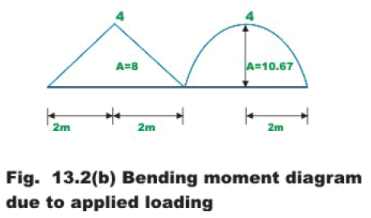 Assume an imaginary span having infinitely large moment of inertia and arbitrary span L′ left of A as shown in Fig.13.2b .Also it is observed that moment at C is zero.

The given problem is statically indeterminate to the second degree. The moments MA and MB, the redundants need to be evaluated. Applying three moment equation to the span A’AB,

Again applying three moment equation to span ABC the other equations is obtained. For this case,

(negative as the settlement is  downwards) and δR = 0. 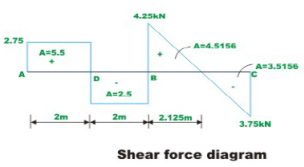 The reactions at B,

The area of each segment of the shear force diagram for the given continuous beam is also indicated in the above diagram. This could be used to verify the previously computed moments. For example, the area of the shear force diagram between A and B is 5.5 kN.m. This must be equal to the change in the bending moment between A and D, which is indeed the case (−4-1.5 = 5.5 kN.m). Thus, moments previously calculated are correct.

A continuous beam ABCD is supported on springs at supports B and C as shown in Fig.13.3a. The loading is also shown in the figure. The stiffness of springs is kB = EI/20 and kC = EI/30. Evaluate support reactions and draw bending moment diagram. Assume EI to be constant.

respectively. Both the settlements are negative and in other words they move downwards. Thus,

Note that initially all reactions are assumed to act in the positive direction (i.e. upwards) .Now,

Now substituting the values of RB and RC in equations (2) and (3),

Substituting the values of MB and MC in (4),reactions are obtained.

The shear force and bending moment diagram are shown in Fig. 13.2d. 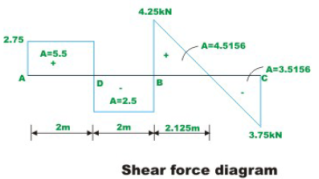 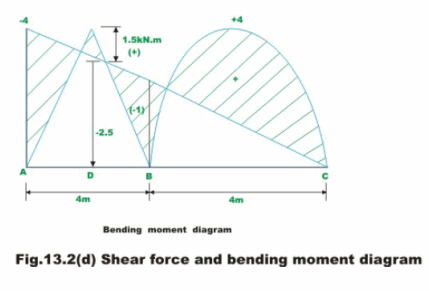 Example 13.3Sketch the deflected shape of the continuous beam ABC of example 13.1. The redundant moments MA and MB for this problem have already been computed in problem 13.1.They are,

The computed reactions are also shown in Fig.13.2c.Now to sketch the deformed shape of the beam it is required to compute rotations at B and C. These joints rotations are computed from equations (13.2) and (13.3).For calculating θA, consider span A’AB

The deflected shape of the beam is shown in Fig. 13.4.