The three phase fully controlled converter is widely used in the medium to moderately high power applications. However in very large power applications (such as HV DC transmission systems) the device ratings become impractically large. Also the relatively low frequency (6th in the dc side, 5th and 7th in the ac side) harmonic voltages and currents produced by this converter become unacceptable. Therefore several such converters are connected in series parallel combination in order to increase the voltage / current rating of the resulting converter. Furthermore if the component converters are controlled properly some lower order harmonics can be eliminated both from the input and output resulting in a higher pulse converter. 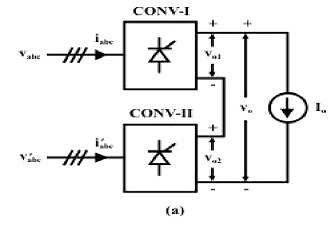 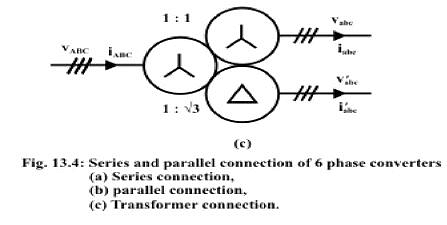 Fig. 13.4(a) schematically represents series connection of two six pulse converters where as Fig. 13.4(b) can be considered to be a parallel connection. The inductance in between the converters has been included to limit circulating harmonic current. In both these figures CONV – I and CONV – II have identical construction and are also fired at the same firing angle α. Their input supplies also have same magnitude but displaced in phase by an angle φ. Then one can write

Now if cos 3Kφ = 0 for some K then the corresponding harmonic disappear from the fourier series expression of v0.

One of the shortcomings of a three phase fully controlled converter is that although it can produce both positive and negative voltage it can not supply current in both directions. However, some applications such as a four quadrant dc motor drive require this capability from the dc source. This problem is easily mitigated by connecting another three phase fully controlled converter in anti parallel as shown in Fig. 13.5 (a). In this figure converter -I supplies positive load current while converter-II supplies negative load current. In other words converter-I operates in the first and fourth quadrant of the output v – i plane whereas converter-II operates in the third and fourth quadrant. Thus the two converters taken together can operate in all four quadrants and is capable of supplying a four quadrant dc motor drive. The combined converter is called the Dual converter. 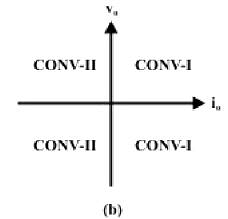 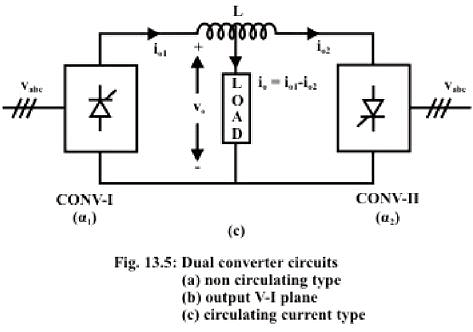 Obviously since converter-I and converter-II are connected in antiparallel they must produce the same dc voltage. This requires that the firing angles of these two converters be related asα2 = π – α1              (13.30)

Although Equations 13.30 ensures that the dc voltages produced by these converters are equal the output voltages do not match on an instantaneous basis. Therefore to avoid a direct short circuit between two different supply lines the two converters must never be gated simultaneously. Converter-I receives gate pulses when the load current is positive. Gate pulses to converter-II are blocked at that time. For negative load current converter-II thyristors are fired while converter-I gate pulses are blocked. Thus there is no circulating current flowing through the converters and therefore it is called the non-circulating current type dual converter. It requires precise sensing of the zero crossing of the output current which may pose a problem particularly at light load due to possible discontinuous conduction. To overcome this problem an interphase reactor may be incorporated between the two converters. With the interphase reactor in place both the converters can be gated simultaneously with α2 = π – α1. The resulting converter is called the circulating current type dual converter.

Several schemes exist to generate gate drive pulses for single phase or three phase converters. In many application it is required that the output of the converter be proportional to a control voltage. This can be achieved as follows.

The following circuit can be used to generate “α” according to equation 13.32. 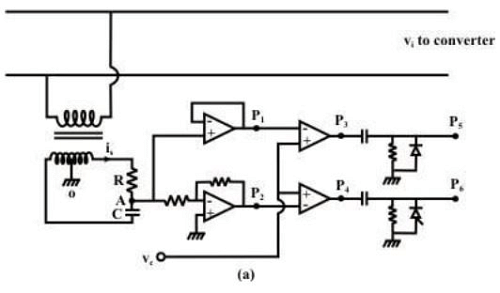 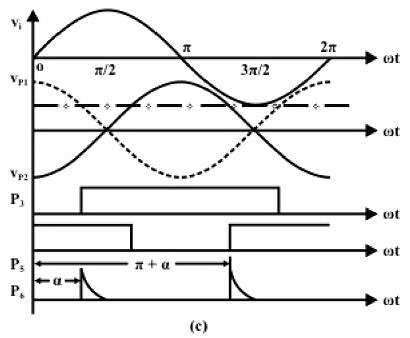 In the circuit of Fig. 13.6(a) a phase shift network is used to obtain a waveform leading vi by 90º. The phasor diagram of the phase shift circuit is shown in Fig. 13.6(b). The output of the phase shift waveform (and its inverse) is compared with vc. The firing pulse is generated at the point when these two waveforms are equal. Obviously at-this instant

Therefore this method of generation of converter firing pulses is called “inverse cosine” control. The output of the phase shift network is called carrier waveform.

Similar technique can be used for three phase converters. However the phase shift network here consists of a three phase signal transformer with special connections as shown in Fig. 13.7. 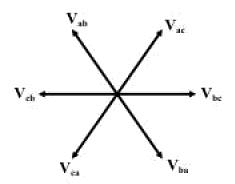 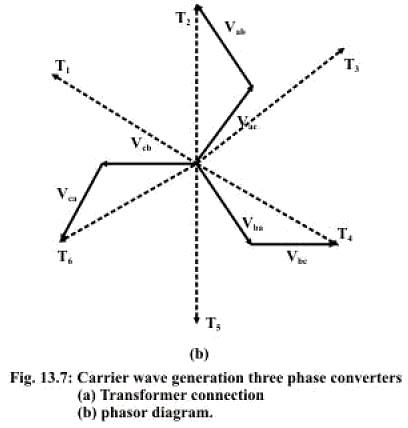 The signal transformer uses three single phase transformer each of which has two secondary windings. The primary windings are connected in delta while the secondary windings are connected in zigzag. From Fig. 13.1 (c) T2 is fired α angle after the positive going zero crossing of vbc. Therefore, to implement inverse cosine the carrier wave for T2 must lead vbc by 90º. This waveform is obtained from zigzag connection of the winding segments a1a2 and c1c 2 as shown in Fig. 13.7(a). The same figure also shows the zigzag connection for other phase. The voltage across each zigzag phase can be used to fire two thyristors belonging to the same phase leg using a circuit similar to Fig. 13.6 (a). The phase shift network will not be required in this case.

1. Fill in the blank(s) with the appropriate word(s)

iii) The input supply voltages to the converters of a 12 pulse converter have ________magnitudes and are phase shifted from one another by _________ degrees.

iv) The input supply to a 12 pulse converter can be obtained through a _________ connected transformer.

ix) To obtain a linear control relation between the control voltage and the output dc voltage of a converter ___________ control logic is used.

3. What will happen if the signal transformers generating the carrier wave have delta – double star connection instead of delta-zigzag connection. Answer: With delta-double star connection of the signal transformers the carrier wave forms will be in phase with the line voltage waveforms. Therefore, without a phase shift network it will not be possible to generate carrier waveforms which are in quadrature with the line voltages. Hence inverse casine control law cannot be implemented.