The Basics of Time, Speed & DistanceFunda 1: Average Speed We know that the average speed in a journey is given by (Total Distance Covered) / (Total Time Taken); but there are few special cases which might help in solving questions –If the distance covered is constant (in each part of the journey, then the average speed is Harmonic Mean of the values.

If the time taken is constant (in each part of the journey then the average speed is Arithmetic Mean of the values.

Funda 2: Using Progressions (Arithmetic & Harmonic) In many questions, you come across a situation when a person is going from Point A to Point B at various speeds and taking various times. We know that if distance is constant, speed and time are inversely proportional to each other. But, this information can also be used to deduce these two facts –

Let us use these ideas to solve couple of quant questions.Eg 2.1 Arun, Barun and Kiranmala start from the same place and travel in the same direction at speeds of 30,40 and 60 km per hour respectively. Barun starts two hours after Arun. If Barun and Kiranmala overtake Arun at the same instant, how many hours after Arun did Kiranmala start? [CAT 2006]
Note: Arun Barun Kiranmala is a 1968 Bangladeshi film. Now you can guess what inspires CAT question setters.
Solution: As you can see that the speeds are in HP, so we can say that the times taken will be in AP. Time difference between Arun and Barun is 2 hours, so the time difference between Barun and Kiranbala will also be 2 hours. Hence, Kiranbala started 4 hours after Arun.Eg 2.2 Rishi Kapoor can swim a certain course against the river flow in 84 minutes; he can swim the same course with the river flow in 9 minutes less than he can swim in still water. How long would he take to swim the course with the river flow?
Solution: Let us say Speed of the Rishi Kapoor in still water is ‘RK’ and Speed of the river is ‘R’. Hence, Rishi Kapoor’s speeds against the river flow, in still water and with the river flow are: RK – R, RK and RK + R. As you can see, they are in AP. Hence, the corresponding times taken will be in HP. Let us say that the time taken to row down with the stream is ‘t’, then 84, t+9 and t are in HP. So,

Note: The same formulae will be valid if two bodies ‘a’ & ‘b’ start at different times from two points P & Q towards each other. They meet at a point R in between after travelling for ta and tb time respectively. After meeting, they take the same amount of time (‘t’) to reach their respective destinations (Q & P).

Time and Distance - Examples (with Solutions)1. The fundamental relationship between Distance (s), time (t) and speed (v) is given by: s = v x t. 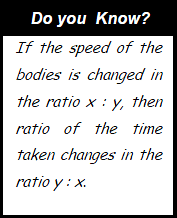 6. For the same distance, the time is inversely proportion to the speed of theobject. These types of problems can be solved as the problems ofpercentage.

Ex.1 If I decrease my speed by 20% of original speed, I reach office 7 minute late. What is my usual time and new time of reaching office?
Sol. Since speed is decreased by 20% i.e.

of the original. New speed will become

of the originalspeed. For the same distance, the time will become

7. When time is constant the ratio of speeds of the object is equal to the ratio of the distance covered bythem i.e.

(i) When a train approaches a stationary object (a tree, a stationary man, a lamp-post; we assume thelength of the object to be infinitely small; provided its length isn’t mentioned)Time taken by the train to cross Pole =

(iii) For two trains having lengths l1 & l2 and traveling in the same direction with speeds v1 & v2 respectively(v1 > v2).Time taken to cross each other completely

(iv) Similarly, for two trains traveling in the opposite direction:Time taken to cross each other completely = total distance /relative velocity =

(v) If two trains/Object start at the same time from two points X & Y and move towards each other and aftercrossing they take a & b hrs respectively to reach opposite points Y and X, then

(e) Speed of the second train =

∴ Time = Sum of the length of the two trains/ Relative velocity

Ex.5 Sachin and Saurav, as a warm-up exercise, are jogging on a circular track. Saurav is a better athlete and jogs at 18km/hr while Sachin jogs at 9 km/hr. The circumference of the track is 500m (i.e. ½ km). They start from the same point at the same time and in the same direction. When will they be together again for the first time?
Sol. Method 1: Since Saurav is faster than Sachin, he will take a lead andas they keep running, the gap between them will keep widening. Unlikeon a straight track, they would meet again even if Saurav is faster thanSachin.

The same problem could be rephrased as “In what time would Sauravtake a lead of 500 m over Sachin”?

Every second Saurav is taking a lead of

over Sachin in Therefore, they would meet for the first time after 200sec.

In general, the first meeting if both are moving in the same direction andafter both have started simultaneously occurs after

Method 2: For every round that Sachin makes, Saurav would have made 2 rounds because the ratio oftheir speeds is 1 : 2. Hence, when Sachin has made 1 full round, Saurav would have taken a lead of 1round. Therefore, they would meet after 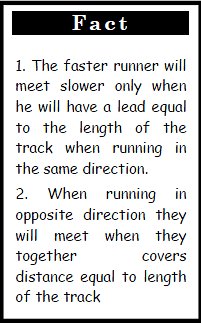 Ex.7 If the speeds of Saurav and Sachin were 8 km/hr and 5 km/hr, then after what time will the two meet for the first time at the starting point if they start simultaneously?

Sol. Let us first calculate the time Saurav and Sachin take to make one full circle. 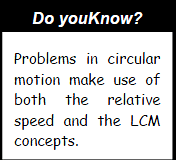 Note: From the solution you could realise that it is immaterial whether they move in the same directionor in the opposite.

Circular motion with three people:If three persons A, B, and C are running along a circular track of length d meters with speedsVa ,Vb ,Vc respectively. To find the time when all the three will meet for the first time, we have tocalculate the relative time of the meeting of any one (A or B or C) among the three with other tworunners and then calculate the LCM of these two timings. This will be the time when all the threerunners will meet for the first time.

And to calculate when they all meet for the first time at the starting point, we have to take the LCM ofthe timings taken by all the runners separately to cover one full circular motion.

Ex.8 Let us now discuss the cases of circular motion with three people: Laxman joins Saurav and Sachin, and all of them run in the same direction from the same point simultaneously in a track of length 500 m. Laxman moves at 3 km/hr, Sachin at 5 km/hr and Saurav at 8 km/hr. When will all of them be together again?
a. for the first time?
b. for the first time at the starting point?
Sol. (a) Break the problem into two separate cases.In the first case, Saurav moves at the relative speed of (8 - 5) = 3 km/hr with respect to Sachin.At a relative speed of 3 km/hr, he would meet Sachin after every

In the second case, Saurav moves at the speed of (8 - 3) km/hr = 5 km/hr with respect to Laxman.At a relative speed of 5 km/hr, he would meet Laxman after every

Ex.9 A thief is spotted by a policeman from a distance of 200 m. When the policeman starts a chase, the thief starts running. Speed of thief is 10 Kmph and that of policeman is 12 kmph. After how many hours will the policeman catch the thief?
Sol.