The document Time and Work - Examples (with Solutions), Arithmetic, Quantitative Aptitude Quant Notes | EduRev is a part of the Quant Course IBPS Clerk Prelims - Study Material, Mock Tests.
All you need of Quant at this link: Quant

Pipes and Cisterns problems are almost the same as those of Time and Work problems. Thus, if a pipe fills a tank in 6 hrs, then the pipe fills 1/6th of the tank in 1 hour. The only difference with Pipes and Cisterns problems is that there are outlets as well as inlets. Thus, there are agents (the outlets) which perform negative work too. The rest of the process is almost similar. 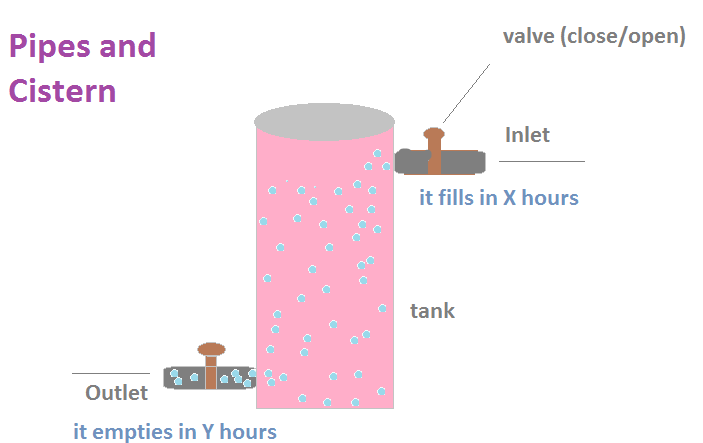 Hence, both the pipes together will fill the tank in 20 hours.

Question 1:Three pipe P, Q and R can fill a tank In 12 minutes, 113 minutes and 29 minutes respectively. The pipe R is closed 12 minutes before the tank Is filled. In what time the tank is full?
Explanation

Question 3:Three pipes A, B and C can fill a tank from empty to full in 30 minutes, 20 minutes and 10 minutes respectively. When the tank is empty, all the three pipes are opened. A, B and C discharge chemical solutions P, Q and R respectively. What is the proportion of solution R in the liquid in the tank after 3 minutes?
Explanation

Question 4:Pipe A can fill a tank in 36 hours and pipe B can empty it in 45 hours. If both the pipes are opened simultaneously, how much time will be taken to fill the tank?
Solution.
Explanation