The document Toroid and Solenoid Class 12 Notes | EduRev is a part of the NEET Course Physics Class 12.
All you need of NEET at this link: NEET

9. Toroid : It is on hollow circular tube have windings of conducting wire closely attached to each other circularly on it (as shown below) 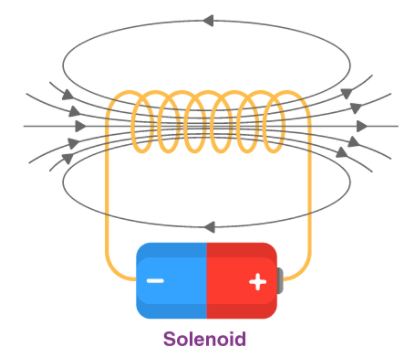 From the Ampere’s Law, the magnetic force produced by a solenoid can be given as,

Where n is the number of turns of the wire per unit length, I is the current flowing through the wire and the direction is given using the right-hand thumb rule.

Ex.14 Three identical long solenoids P, Q and R are connected to each other as shown in figure. if the magnetic field at the center of P is 2.0 T, what would be the field at the centre of Q? Assume that the field due to any solenoid is confined within the volume of that solenoid only.

When a charge q moves with velocity , in a magnetic field , then the magnetic force experienced by moving charge is given by following formula :

: Magnetic field at that point.

(1) Magentic force is always perpendicular to the field while electric force is collinear with the field.

Therefore, power due to magnetic force on a charged particle is zero. (use the formula of power P =

so work done by magnetic force is zero in every part of the motion. The magnetic force cannot increase or decrease the speed (or kinetic energy) of a charged particle. Its can only change the direction of velocity.

On a stationary charged particle, magnetic force is zero.

, then also magnetic force on charged particle is zero. It moves along a straight line if only magnetic field is acting.

Ex.15 A Charged particle of mass 5 mg and charge q = +2μC has velocity . Find out the magnetic force on the charged particle and its acceleration at this instant due to magnetic field .  and  are in m/s and Wb/m2 respectively.

Ex.16 A charged particle has acceleration  in a magnetic field . Find the value of x.

12. MOTION OF A CHARGED PARTICLE IN A UNIFORM MAGNETIC FIELD.

12.1 WHEN THE CHARGED PARTICLE IS GIVEN VELOCITY PERPENDICULAR TO THE FIELD

Let a particle of charged q and mass m is moving with a velocity v and enters at right angles to a uniform magnetic field  as shown in figure.

The force on the particle is qvB and this force will always act in a direction perpendicular to v. Hence, the particle will move on a circular path. If the radius of the path is r then

Time period : The time period is the time taken by the charged particle to complete one rotation of the circular path which is given by,

The time period is independent of the speed v.

Frequency : The frequency is number of revolution of charged particle in one second, which is given by,

Ex 17. A proton (p), a - particle and deuteron (D) are moving in circular paths with same kinetic energies in the same magnetic field. Find the ratio of their radii and time periods. (Neglect interaction between particles).

Ex.18 A positive charge particle of charge q, mass m enters into a uniform magnetic field with velocity v as shown in the figure. There is no magnetic field to the left of PQ. Find

Sol. The particle will move in the field as shown. Angle subtended by the arc at the centre = 2q

(i) Time spent by the charge in magnetic field

(ii) Distance travelled by the charge in magnetic field :

(iii) Impulse = change in momentum of the charge