If the o/p signal must be a faithful reproduction of the i/p signal, then transistor must be operated in active region. That means an operating point has to be established in this region . To establish an operating point (proper values of collector current IC and collector to emitter voltage VCE) appropriate supply voltages and resistances must be suitably chosen in the circuit. This process of selecting proper supply voltages and resistance for obtaining desired operating point or Q point is called as biasing and the circuit used for transistor biasing is called as biasing circuit.

There are four conditions to be met by a transistor so that it acts as a faithful amplifier:

Consider fig1. If operating point is selected at A, A represents a condition when no bias is applied to the transistor i.e, IC=0, VCE =0. It does not satisfy the above stated conditions necessary for faithful amplification.

Point C is too close to PD(max) curve of the transistor. Therefore  the o/p voltage swing in the positive direction is limited.

Point B is located in the middle of active region. It will allow both positive and negative  half cycles in the o/p signal. It also provides linear gain and larger possible o/p voltages and currents.

Hence operating point for a transistor amplifier is selected to be in the middle of active region. 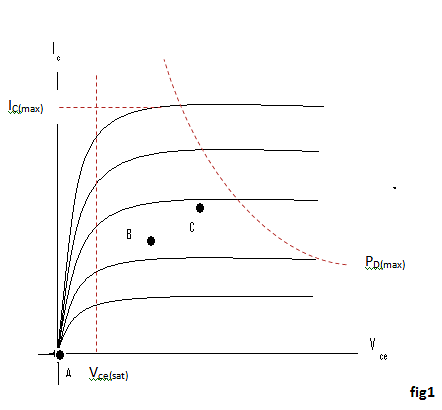 Referring to the biasing circuit of fig 4.2a, the values of VCC and RC are fixed and IC and VCE are dependent on RB.

Applying Kirchhoff’s voltage law to the collector circuit in fig. 4.2a, we get

The straight line represented by AB in fig4.2b is called the dc load line. The coordinates of the end point A are obtained by substituting VCE =0 in the above equation. Then

As shown in the fig4.2b, the optimum POINT IS LOCATED AT THE MID POINT OF THE MIDWAY BETWEEN A AND B. In order to get faithful amplification, the Q point must be well within the active region of the transistor.

Even though the Q point is fixed properly, it is very important to ensure that the operating point remains stable where it is originally fixed. If the Q point shifts nearer to either A or B, the output voltage and current get clipped, thereby distorting the o/p signal.

In practice, the Q-point tends to shift its position due to any or all of the following three main factors.

If base current IB is kept constant since IB is approximately equal to Vcc/RB. If the transistor is replaced by another one of the same type, one cannot ensure that the new transistor will have identical parameters as that of the first one. Parameters such as β vary over a range. This results in the variation of collector current IC for a given IB. Hence , in the o/p characteristics, the spacing between the curves might increase or decrease which leads to the shifting of the Q-point to a location which might be completely unsatisfactory.

. To draw the ac load line, two end points, i.e. VCE(max) and IC(max)  when the signal is applied are required.

VCE(max)=VCEQ+ICQRac, which locates point D on the Vce axis.

which locates the point C  on the IC axis.

The extent to which IC is stabilized with varying temperature is measured by a stability factor S.

Differentiate the above equation w.r.t IC , We get 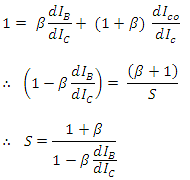 S should be small to have better thermal stability.

S’ is defined as the rate of change of   IC with VBE, keeping IC and VBE constant.

S’’ is defined as the rate of change of   IC with β, keeping ICO and VBE constant.