The document Trigonometry Identities, Applications - Introduction to Trigonometry, Class 10, Mathematics Notes - Class 10 is a part of Class 10 category.
All you need of Class 10 at this link: Class 10

Geometrical Proof : Consider a ΔABC, right angled at B. Then we have :

Since cosec A and cot A are not defined for A = 0�, therefore

To prove Trigonometrical Identities The following methods are to be followed :

Method-I: Take the more complicated side of the identity (L.H.S. or R.H.S. as the case may be) and by using suitable trigonometric and algebraic formulae prove it equal to the other side.

Method-II : When neither side of the identity is in a simple form, simplify the L.H.S. and R.H.S. separately by using suitable formulae (by expressing all the T-ratios occuring in the identity in terms of the sine and cosine and show that the results are equal).

Method-III : If the identity to be proved is true, transposing so as to get similar terms on the same side, or if cross-multiplication, and using suitable formulae, we get an identity which is true.

[Dividing the numerator and denominator by sin A cos A.]

Many times, we have to find the height and distances of many objects in real life. We use trigonometry to solve problems, such as finding the height of a tower, height of a flagmast, distance between two objects, where measuring directly is trouble, some and some times impossible. In those cases, we adopt indirect methods which involves solution of right triangles.
Thus Trigonometry is very useful in geography, astronomy and navigation. It helps us to prepare maps, determine the position of a landmass in relation to the longitudes and latitudes. Surveyors have made use of this knowledge since ages.
Angle of Elevation The angle between the horizontal line drawn through the observer eye and line joining the eye to

Angle of Depression The angle between the horizontal line drawn through the observer eye and the line joining the eye to any object is called the angle of depression of the object if the object is at a lower level than the eye. i.e., lf a horizontal line OX is drawn through O, the eye of an observer, and P is an object in the vertical plane through OX, then if P is below OX, as in fig. ∠XOP is called the angle of depression of P as seen from O.

1. The angle of elevation as well as angle of depression are measured with reference to horizontal line.
2. All objects such as towers, trees, mountains etc. shall be considered as linear for mathematical convenience,throughout this section.
3. The height of the observer, is neglected, if it is not given in the problem.
4. Angle of depression of P as seen from O is equal to the angle of elevation of O, as seen from P.i.e., ∠AOP = ∠OPX.
5. To find one side of a right angled triangle when another side and an acute angle are given, the hypotenusealso being regarded as a side.

BEARING OF A POINT

The true bearing to a point is the angle measured in degrees in a clockwise direction from the north line.
We will refer to the true bearing simply as the bearing. 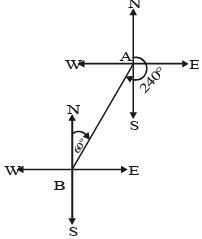 TRY OUT THE FOLLOWING

State the bearing of the point P in each of the following diagrams :

Ex.23 A captain of an aeroplane flying at an altitude of 1000 metres sights two ships as shown in the figure. If the angle of depressions are 60� and 30�, find the distance between the ships. 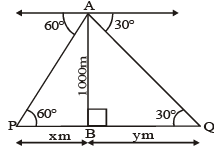 The document Trigonometry Identities, Applications - Introduction to Trigonometry, Class 10, Mathematics Notes - Class 10 is a part of Class 10 category.
All you need of Class 10 at this link: Class 10