Basic operating principle of SCR, can easily be understood by the two transistor model of SCR, as it is a combination of p and n layers. 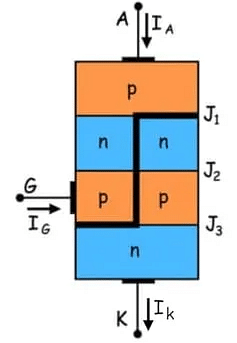 This is a pnpn thyristor. If we bisect it through the dotted line then we will get two transistors i.e. one pnp transistor with J1 and J2 junctions and another is with J2 and J3 junctions as shown in figure below. 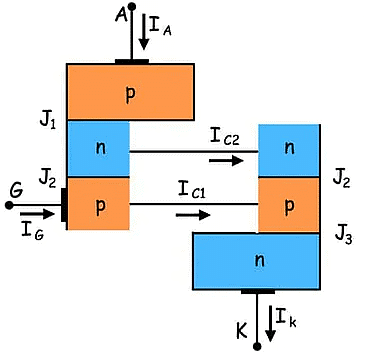 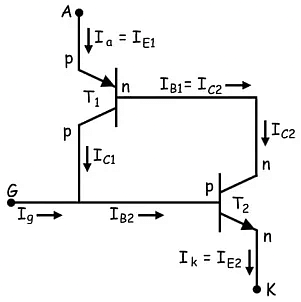 Where, IB is base current and β is common emitter forward current gain.

And that for transistor T2

Now, by the analysis of two transistors model we can get anode current,

By substituting this valyue of Ik in (iii) we get,

Presence of base current will generate collector current as

This IC2 is nothing but base current IB1 of transistor T1, which will cause the flow of collector current,

which will lead to increase emitter current

and as a result α2 also increases and this further increases.

As, α1 again increases. This continuous positive feedback effect increases(α1 + α2)towards unity and anode current tends to flow at a very large value. The value current then can only be controlled by external resistance of the circuit.