(ii) Perforated pipe system.(i) Rotating Head: In this type of system small spraying size nozzles are placed on pipes of certain height known as riser pipes. The nozzles mounted on the riser pipes are fixed at uniform intervals along the length of the pipe laid on the ground surface called as lateral pipes. Water is supplied from the source to laterals through network of pipes consisting of mainline and sub mainline, called as main and sub main. Water with pressure is supplied to main; main to sub main and sub main to laterals using a pump. The sprinkler heads mounted on the risers which are above the crop height and rotated through 90o to 360o, to irrigate a rectangular strip. In rotating type sprinklers, the most common device to rotate the sprinkler nozzle is a small hammer activated by the thrust of water striking against a vane connected to it. The pressure requirement varies from 2.0 to 4.0 kg cm-2 with application rate from 4.0 to 20.0 mm hr-1 depending on the nozzle size, spacing etc. Fig. 36.1. shows different type of rotating type sprinkler irrigation systems.

(ii) Perforated Pipe System: This system consists of pipes having holes or nozzles along its length through which water is sprayed under pressure. This system is usually designed for relatively low pressure (1 kg cm-2). The application rate ranges from 1.25 to 5 cm per hour for various pressure and spacing. The example shown in the Fig. 36.2. 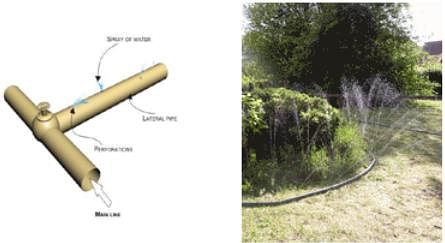 36.1.2 Classification Based on the Portability(i) Portable System: A portable system has portable mainlines, submains, laterals, and a portable pumping unit. The entire system can be moved from field to field. As all the components of the system need to be moved, the labour requirement is high; however initial investment on this type of the system is less.(ii) Semi-Portable System: A semi-portable system is similar to a portable system except that the location of water source and pumping plant is fixed. Fig. 36.3 shows Semi-portable sprinkler system. Other components are moved from one field to another. Such a system may be used for more than one field where there is an extended mainline, but may not be used for more than one farm unless there are additional pumping units. 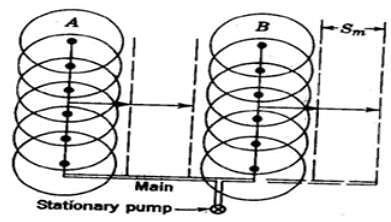 (iii) Semi-Permanent System: A semi-permanent system has portable lateral lines, permanent mainlines, submains, and a stationary water source with pumping unit. The mainlines and/or submains are usually buried. The risers are located for nozzle connections at suitable intervals to connect with laterals.(iv) Permanent System: A permanent system has buried mainlines, submains, and laterals with a stationary pumping plant and/or water source. Sprinkler nozzles are permanently located on each riser. Such systems are expensive, however these are suitable for automation. Permanent systems are suitable for orchards.(v) Solid Set System: In case of a solid set system, the movement of laterals is eliminated at least for one crop season their movement. The laterals are positioned in the field before the crop season starts and kept there for the whole crop season. This system is beneficial when frequent moving of the laterals is not required crops need frequent irrigation in small depth.(vi) Set-Move Irrigation Systems: Set-move sprinkler irrigation systems are moved from one set (irrigation) position to another by hand or mechanically. Set-move systems remain stationary when water is applied. When the desired amount of water has been applied, the water is shut off and the sprinkler laterals are drained and moved to the next set position. When the move is complete the water is turned on and irrigation resumed at the new set position. This sequence is repeated until the entire field has been irrigated. Set-move systems commonly have a single mainline laid through the centre of the field with one or more laterals on each side of the mainline.

The systems can be moved by different means as described below:

(a) Hand-Move: Hand-move laterals are moved by uncoupling, picking –up, and carrying sections of lateral pipe by hand to the next set position where the lateral sections are reconnected. Earlier hand-move sprinkler lateral were made up of aluminium of different diameter. Now these are made with HDPE available in 50 to 150 mm (2 to 6 in) in diameter and  6, 9, or 12 m (20, 30, or 40 ft) long.(b) Tow-Move: Tow-move sprinkler systems are the least expensive type of mechanically moved set-move system. Each section of a tow-move lateral has skids or wheels so that the entire laterals can be pulled to the next set position. Usually a tractor is hooked to the mainline end attached with lateral and the lateral is dragged in the other direction across the mainline in an opposite S-shaped curve. The moves are made easier when mainlines are buried.Tow-move systems are not used extensively because moving the lateral is tedious. It requires careful attention and may damage crops. Tow-move systems are suitable to forage and row crops.(c) Side-Roll: A side-roll or wheel-move system, is the mechanically moved set-move system. Each section of pipe in a side-roll lateral has a wheel, with the pipe serving as the axle of the wheel. A gasoline engine and transmission with a reverse gear at the centre or the end of the lateral supplies the power needed to roll the lateral, which may be as long as 800 m (about one-half mile), from one set position to the next. The lateral is commonly 100 or 125 mm (4 or 5 in) in diameter. Each lateral section is usually 12.2 m (40 ft) long with a wheel at its centre and a sprinkler mounted on a short riser at one end. Often the sprinklers have self –levellers to “right” the sprinkler when the lateral is stopped so that the riser is tilted” from its upright position. A drain valve that opens automatically when there is a loss of pressure is usually located opposite each rise. This allows the lateral to be quickly drained and permits moving the lateral with a minimum time loss. The most common spacing along the mainline is 18.3 m (60 ft).(d) Gun-Type: The set-move system consists of a larger-volume (big-gun) sprinkler mounted on a wheeled cart or trailer that is moved from set to set with a tractor or by hand. Sprinklers with capacities as large as 4700 L min-1 (about 1250 gpm), wetted diameters of as much as 180 m (about 600 ft), and a recommended operating pressure range of 480 to 896 kPa (70 to 130 psi) are commonly used. These systems are sometimes used for waste water disposal.

Sprinklers or nozzles, laterals, sub-mains, and mainlines are the primary components of a sprinkle irrigation system. Sprinklers spread water as “rainlike” droplets over the land surface. Laterals receive water from the mainline and sub-main and convey to the sprinklers. Mainlines convey water from the water source to the sub-mains and laterals. Fig.36.4. shows the components of a portable sprinkler irrigation system. A sprinkler system usually consists of the following components.

(i) Pumping Unit: Sprinkler irrigation system distributes water by spraying it over the fields. The water from the source (ground water / surface water) is pumped under pressure to sprinkler system. The pressure created through pump forces water through sprinklers or through perforations or nozzles in pipelines and then forms a spray. A high speed centrifugal or turbine pump can be used for operating sprinkler irrigation to individual fields. Centrifugal pump is used when the distance from the pump inlet to the water surface (suction head) is less than eight meters. For pumping water from deep wells or more than eight meters, a submersible pump is used. The driving unit of pump may be either an electric motor or an internal combustion engine. 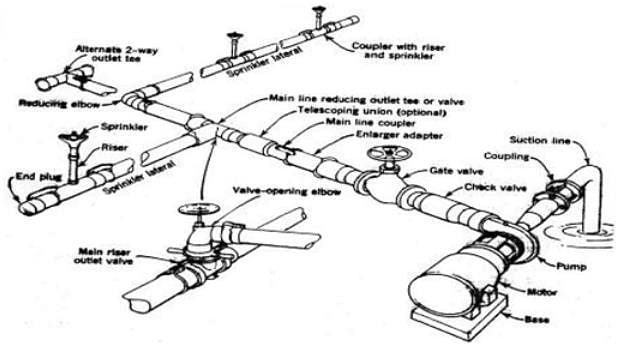 (ii) (a) Fertiliser Application Unit: Soluble chemical fertilizers can be injected into the sprinkler system and applied to the crop. The fertilizer applicator consists of a sealed fertilizer tank with necessary tubings and connections. A venturi injector is connected with the main line, which creates the differential pressure to suck fertilizer solution to flow in the main line.(b) Filters: Filters are used to filter the suspended particles and debris flowing with water.(iii) Pipe Network: The pipe network consists of mains/submains and laterals. Main line conveys water from the source and distributes it to the submains. The submains convey water to the laterals which in turn supply water to the sprinklers. Aluminium or PVC or HDPE pipes are generally used for portable systems, while steel pipes are usually used for center-pivot laterals. Asbestos, cement, PVC and wrapped steel are also used for buried laterals and main lines.(iv) Sprinkler Head: Sprinkler head distributes water uniformly over the field without generating runoff and loss due to deep percolation. Types of sprinklers are rotating head or fixed type. The rotating type can be adopted for a wide range of application rates and spacing (Fig. 36.5). They are effective with pressure of about 10 to 70 m head at the sprinkler. Pressures ranging from 16 to 40 m head are considered to be the most practical for normal uses.Fixed head sprinklers are commonly used to irrigate small lawns and gardens. Perforated lateral lines are also used to sprinkle water. They require less pressure than rotating sprinklers. However they release more water per unit area than rotating sprinklers. Hence fixed head sprinklers are adoptable for soils with high intake rate. Fig. 36.5 shows the rotating head sprinkler head. 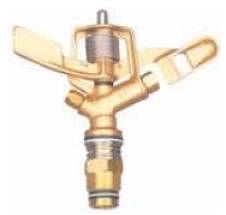 (iv) Couplers & Fitting Accessories: Couplers are used for connecting two pipes and uncoupling quickly and easily. Essentially a coupler should provide: a) a reuse and flexible connection, b) not leak at the joint, c) be simple and easy to couple and uncouple, and d) be light, non-corrosive, durable. Fig 36.6 shows different types of sprinkler fittings and accessories. Some of the important fittings and accessories used in sprinkler system are given below.(a) Water meters: It is used to measure the volume of water delivered in to the system. This is necessary to operate the system to supply the required quantity of water.(b) Flange, couplings and nipples are used for proper connection to the pump, suction and delivery.(c) Pressure gauge: It is used to measure operating pressure of sprinkler system. The sprinkler system is operated at the pressure to apply the desired depth of water and ensure application uniformity.(d) Bend, tees, reducers, elbows, hydrants, butterfly valve and plugs are other components of a sprinkler system. They are used as per requirements. 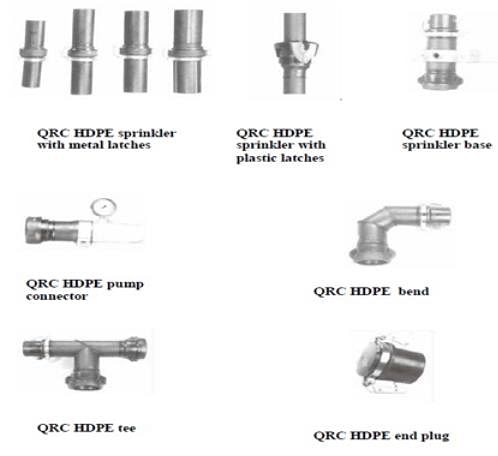