Types of boring1.Displacement borings It is combined method of sampling & boring operation. Closed bottom sampler, slit cup, or piston type is forced in to the ground up to the desired depth. Then the sampler is detached from soil below it, by rotating the piston, & finally the piston is released or withdrawn. The sampler is then again forced further down & sample is taken. After withdrawal of sampler & removal of sample from sampler, the sampler is kept in closed condition & again used for another depth.Features : • Simple and economic method if excessive caving does not occur. Therefore not suitable for loose sand. /;• Major changes of soil character can be detected by means of penetration resistance.• These are 25mm to 75mm holes.• It requires fairly continuous sampling in stiff and dense soil, either to protect the sampler from damage or to avoid objectionably heavy construction pit.2.Wash boring: It is a popular method due to the use of limited equipments. The advantage of this is the use of inexpensive and easily portable handling and drilling equipments. Here first an open hole is formed on the ground so that the soil sampling or rock drilling operation can be done below the hole. The hole is advanced by chopping and twisting action of the light bit. Cutting is done by forced water and water jet under pressure through the rods operated inside the hole.In India the “Dheki” operation is used, i.e., a pipe of 5cm diameter is held vertically and filled with water using horizontal lever arrangement and by the process of suction and application of pressure, soil slurry comes out of the tube and pipe goes down. This can be done upto a depth of 8m –10m (excluding the depth of hole already formed beforehand) Just by noting the change of colour of soil coming out with the change of soil character can be identified by any experienced person. It gives completely disturbed sample and is not suitable for very soft soil, fine to medium grained cohesionless soil and in cemented soil. 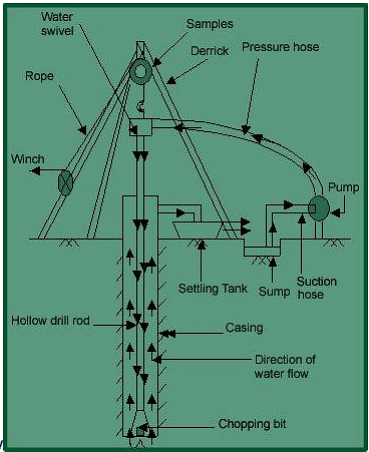 The soil is under great stress as it enters the sampler and has a tendency to laterally expand. The inside clearance should be large enough to allow a part of lateral expansion to take place, but it should not be so large that it permits excessive deformations and causes disturbances of the sample. For good sampling process, the inside clearance ratio should be within 0.5 to 3 %. For sands silts and clays, the ratio should be 0.5 % and for stiff and hard clays (below water table), it should be 1.5 %. For stiff expansive type of clays, it should be 3.0 %. area ratio

Where, L is the length of the sample within the tube,H is the depth of penetration of the sampling tube.It represents the disturbance of the soil sample. For good sampling the recovery ratio should be 96 to 98 %.Wall friction can be reduced by suitableinside clearance, smooth finish and oiling.The non-returned wall should have large orifice to allow air and water to escape. In-situ tests General The in situ tests in the field have the advantage of testing the soils in their natural, undisturbed condition. Laboratory tests, on the other hand, make use of small size samples obtained from boreholes through samplers and therefore the reliability of these depends on the quality of the so called ‘undisturbed' samples. Further, obtaining undisturbed samples from noncohesive, granular soils is not easy, if not impossible. Therefore, it is common practice to rely more on laboratory tests where cohesive soils are concerned. Further, in such soils, the field tests being short duration tests, fail to yield meaningful consolidation settlement data in any case. Where the subsoil strata are essentially non-cohesive in character, the bias is most definitely towards field tests. The data from field tests is used in empirical, but time-tested correlations to predict settlement of foundations. The field tests commonly used in subsurface investigation are:Penetro meter testPressure meter testVane shear test Plate load testGeophysical methodsPenetrometer Tests : Standard penetration test (SPT)Static cone penetration test (CPT)Dynamic cone penetration test (DCPT)

The Standard penetration test The standard penetration test is carried out in a borehole, while the DCPT and SCPT are carried out without a borehole. All the three tests measure the resistance of the soil strata to penetration by a penetrometer. Useful empirical correlations between penetration resistance and soil properties are available for use in foundation design.This is the most extensively used penetrometer test and employs a split-spoon sampler, which consists of a driving shoe, a split-barrel of circular cross-section which is longitudinally split into two parts and a coupling. IS: 2131-1981 gives the standard for carrying out the test.