Water is conveyed from the water source to the cropped field using networks of open channels and or pipe lines. Pipe lines have several advantages over open channels. A properly designed pipeline system saves water, energy consumption and land used for field channels. Underground pipe line types and its components are presented in this lesson.15.1 Advantages of Underground Pipeline System

In low head pipe line system water is taken from the water source and directly distributed to basins, borders, and furrows. These low head pipeline works satisfactorily on non-uniform grades, and also at uphill and downhill the land slopes. Such pipeline consists of an inlet, one or more outlets, with head control devices and surge protection structures, air relief valve, flow meter and debris and sand removal devices. Pressure relief, air release, and vacuum relief valves that are used for pressurized pipelines are also used with low-head pipelines. Pipelines permit the conveyance of water on uphill or downhill slopes. These systems are also suitable to undulating topography and can supply water at any part of the farm. The pipe line systems can be buried or on the surface. Surface pipe lines portable and these are brought back after irrigation. The buried pipe lines placed below the ground surface are permanent and called as permanent underground pipeline. Underground pipe line conveyance system is preferred over surface pipe lines as the cultivation can be done on the land above pipeline and it does not affect farming operation.15.3 Types of Irrigation Water Conveyance Pipeline System

Generally there are three types of irrigation water conveyance pipe line systems. The first is the completely portable surface pipe line system. In this system water is supplied from source and applied to the field from open end of pipe line or using gated outlets. In second system, a combination of buried and surface pipes are used, where buried permanent pipe lines are used to transmit water from source to risers. These risers supply water to surface pipes .In third system, water is delivered from riser/alfalfa valve and channel border or basins, eliminates the need for surface pipes. Water is released on the portion of the field to be irrigated from risers. Irrigation pipe must be sized carefully to deliver enough discharge and at the same time it should be economical.15.4 Pressure Variations in Irrigation Pipe LinesPressure in the pipe line increases or decreases due to change in elevation (uphill or downhill conditions).The difference in pressure between two locations along a pipeline can be estimated using following equation.

Where,F = constant that depends on the number of outlets removing water from the pipe between source and application points

Hf = loss of head due to friction

D = the inside pipe diameter

g = the acceleration due to gravity, and

Equation (15.3) is dimensionally consistent and can be used with the same ‘f’ values for FPS or SI units. Values of f have been related to boundary roughness dimensions on pipe surface and determined empirically. These are tabulated inHazen Williams Equation: The Hazen Williams equation can be written as:

R = the hydraulic radius of pipe and

S = the slope of pipeline (fraction)

In SI units velocity (V) in m/s, inside diameter (D) in mm

The exponents in the Scobey equation may have different values for other pipe materials (Brater and King, 1976). Recommended values for K1 and KS available in the chapter 5 in James (1988), are used to compute pipe size.

Estimation of Minor Losses: Energy losses through fittings and valves also need to be considered in the design of an irrigation pipeline. These so-called ‘‘local’’ or minor losses are frequently estimated by applying a coefficient to the velocity head at the fitting. The sum of all local losses is then added to frictional head loss to estimate total loss in the pipeline. Local loss coefficients to be used in the equation is given:The values of local loss coefficient (K) due to fittings, joints, valves, elbows and Tees can be obtained from the book entitled “Design and Operation of Farm Irrigation Systems” Kruse, et al. (1980).

15.5.1 Inlet Components of Underground Pipeline SystemWater inlet components are required to carry water from the source in to low head underground pipelines. An inlet structure is required to develop adequate pressure and full flow capacity so as to distribute water at different points on the farm. Inlet components use a sand trap and trash screen to prevent entry of debris and heavy suspension of sand in the pipe lines.

Pump StandA pump stand is located at the inlet end of underground pipeline system. Pump stand must be high enough to provide the pressure needed at all the pipe outlets. Pump stands size is larger than the diameter of pipe line, to dissipate high velocity stream and release of entrapped air before water enters pipeline. A view of the pump stand is shown in Figure 15.2. 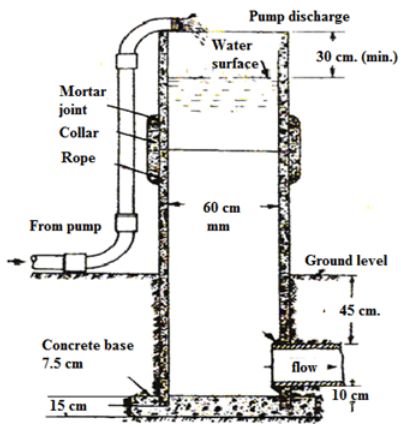 Gravity InletsThe gravity inlet is used when water surface elevation of the water source is sufficient to allow gravity flow into the pipeline and to provide the adequate pressure needed at every point of pipe line and outlet. The low head underground pipe line directly connected with water source can be used for delivering water from a minor canal as shown in Fig. 15.3.

Gate StandsGate stands are installed to control flow into branch lines. These are installed where branch lines take off from main line. They also prevent high pressure and act as surge chamber. Each outlet of a gate stand is equipped with slide gate or gate valve to release water through a particular gate valve. Fig. 15.4 shows branching off water from main pipeline and (gate stand). 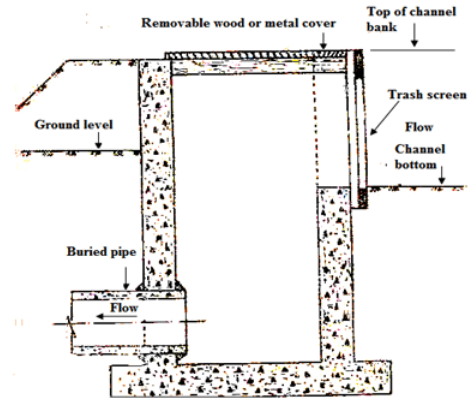 Fig. 15.3.  A sectional view of an inlet for taking water from a minor canal into an underground pipeline. Pressure relief valves open at certain preset pressure and discharge fluid to relieve the surge. They close immediately when pressure drops below settings. In situation, when rapid changes in flow velocity are necessary, the pressure relief valves are used to prevent water hammering. The air inlet valves (also called vacuum relief) are used at desired places in the pipe lines to prevent vacuum formation. The air vents are also used to release entrapped air and to prevent vacuum formation. These air release devices (air vents) are installed at inlet end near pump stands, sharp bends, high elevation points and before end of pipe lines.15.5.2 Outlet Structures

Outlet structures are devices that release water from pipelines to any desired locations in the farm. They consist of a riser pipe, and one or more valves to control the flow. The most common outlet consists of a concrete riser pipe and valves to control the flow. The riser valves, hydrants and gated pipes are connected with riser pipe to distribute water to furrow or a border or a basin. A section of riser pipe with alpha-alpha valve is shown through Fig. 15.5. 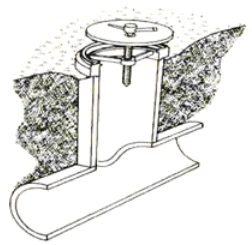 Fig. 15.5. Section of an alfalfa valve for a low head pipeline.

Hydrants are devices placed over riser valve outlets as a means of connecting portable gated pipes to the pipeline. They are portable so that they can be moved from one valve outlet to another to serve the portion of the field which is being irrigated at a particular time. Hydrant can also be used for connecting the suction hose of a pump to the water supply carried in the pipeline under low pressure, so that the pump can develop the high pressure.

The function of an end plug is to close a line and to absorb the pressure developed at the end of the line, on account of water hammer. The plug is backed by a masonry block which provides sufficient strength to meet unexpected high pressure developed due to sudden opening or closing of valves.

Both reinforced concrete pipes and PVC pipes are used for constructing water distribution systems in the command areas of wells. PVC pipes are often preferred because of the ease of installation and ensure leak proof joints. Other factors favouring its use are speed of laying and greater resistance to internal friction, as compared to concrete pipes of a given diameter, to convey large quantities of water. However, skill and adherence to proper procedure in laying the pipes and accessories can be used more economically and with equal efficiency, as compared to PVC pipes on plain land. PVC pipes have distinct advantages over concrete pipes. In undulation topography, however, they need to be buried to avoid UV degradation. HDPE pipe can be used above ground level.