The document Unit 6: Rectification of Errors (Question With Answer) CA CPT Notes | EduRev is a part of the CA Foundation Course Principles and Practice of Accounting.
All you need of CA Foundation at this link: CA Foundation

Summary♦ Unintentional omission or commission of amounts and accounts in the process of recording the transactions are commonly known as errors.♦ Accounting errors are generally of four types-(a) Errors of Principle;(b) Errors of Omission;(c) Errors of Commission;(d) Compensating Errors.♦ Some errors may affect the Trial Balance and some of these do not.♦ The method of rectification of errors depends on the stage at which the errors are detected. If the error is detected before the preparation of trial balance, rectification is carried out by making the statement in the appropriate side of the concerned account.♦ In case of the errors detected after the preparation of the trial balance, we open a suspense account with the amount of difference in the trial balance. Then complete journal entries can be passed for rectifying the errors.♦ For rectifying the errors detected in the next accounting period, a special account 'Profit and Loss Adjustment Account' is opened for correction of amounts relating to expenses and incomes.Multiple Choice QuestionsQues 1: Goods purchased from A for '10,000 passed through the sales book. The error will result in(a) Increase in gross profit.(b) Decrease in gross profit.(c) No effect on gross profit.Ans: aQues 2: If a purchase return of '1,000 has been wrongly posted to the debit of the sales returns account, but has been correctly entered in the suppliers' account, the total of the(a) Trial balance would show the debit side to be '1,000 more than the credit.(b) Trial balance would show the credit side to be '1,000 more than the debit.(c) The debit side of the trial balance will be '2,000 more than the credit side.Ans: cQues 3: If the amount is posted in the wrong account or it is written on the wrong side of the account, it is called(a) Error of omission.(b) Error of commission.(c) Error of principle.Ans: bQues 4: '200 paid as wages for erecting a machine should be debited to(a) Repair account.(b) Machine account.(c) Capital account.Ans: bQues 5: On purchase of old furniture, the amount of '1,000 spent on its repair should be debited to(a) Repair account.(b) Furniture account.(c) Cash account.Ans: bQues 6: Goods worth '50 given as charity should be credited to(a) Charity account.(b) Sales account.(c) Purchase account.Ans: cQues 7: Goods worth '100 taken by proprietor for domestic use should be credited to(a) Sales account.(b) Proprietor's personal expenses.(c) Purchases account.Ans: cQues 8: Sales of office furniture should be credited to(a) Sales Account.(b) Furniture Account.(c) Purchase Account.Ans: bQues 9: The preparation of a trial balance is for:(a) Locating errors of commission.(b) Locating errors of principle.(c) Locating clerical errors.Ans: cQues 10: '200 received from Smith whose account, was written off as a bad debt should be credited to:(a) Bad Debts Recovered account.(b) Smith's account.(c) Cash account.Ans: aQues 11: Purchase of office furniture '1,200 has been debited to General Expense Account. It is:(a) A clerical error.(b) An error of principle.(c) An error of omission.Ans: bTheory QuestionsQues 1: How does errors of omission differ from errors of commission?

Ans: (i) Errors of Omission: If a transaction is completely or partially omitted from the books of account, it will be a case of omission. Examples would be: not recording a credit purchase of furniture or not posting an entry into the ledger.(ii) Errors of Commission: If an amount is posted in the wrong account or it is written on the wrong side or the totals are wrong or a wrong balance is struck, it will be a case of "errors of commission."Ques 2: What is error of principle and how does it affect Trial Balance?

Ans: Errors of principle: When a transaction is recorded in contravention of accounting principles, like treating the purchase of an asset as an expense, it is an error of principle. In this case there is no effect on the trial balance since the amounts are placed on the correct side, though in a wrong account. Suppose on the purchase of a typewriter, the office expenses account is debited; the trial balance will still agree.

Ques 3: When and how is Suspense account used to rectify errors?Ans: The method of correction of error indicated so far is appropriate when the errors have been located before the end of the accounting period. After the corrections the trial balance will agree. Sometimes the trial balance is artificially made to agree inspite of errors by opening a suspense account and putting the difference in the trial balance to the account - the suspense account will be debited if the total of the credit column in the trial balance exceeds the total of the debit column; it will be credited in the other case. Each and every error detected can only be corrected by a complete journal entry. Those errors for which journal entries were not possible at the earlier stage will now be rectified by a journal entry(s), the difference or the unknown side is being taken care of by suspense account. Those errors for which entries were possible even at the first stage will now be rectified in the same way.Practical QuestionsQues 1: The trial balance of Mr. W & H failed to agree and the difference ₹20,570 was put into suspense pending investigation which disclosed that:(i) Purchase returns day book had been correctly entered and totalled at ₹6,160, but had not been posted to the ledger.(ii) Discounts received ₹1,320 had been debited to discounts allowed.(iii) The Sales account had been under added by '10,000.(iv) A credit sale of ₹1,470 had been debited to a customer account at ₹1,740.(v) A vehicle bought originally for ₹7,000 four years ago and depreciated to ₹1,200 had been sold for ₹1,500 in the beginning of the year but no entries, other than in the bank account had been passed through the books.(vi) An accrual of ₹560 for telephone charges had been completely omitted.(vii) A bad debt of ₹1,560 had not been written off and provision for doubtful debts should have been maintained at 10% of Trade receivables which are shown in the trial balance at '23,390 with a credit provision for bad debts at ₹2,320.(viii)Tools bought for ₹1,200 had been inadvertently debited to purchases.(ix) The proprietor had withdrawn, for personal use, goods worth ₹1,960. No entries had been made in the books.Required:(i) Pass rectification entries without narration to correct the above errors before preparing annual accounts.(ii) Prepare a statement showing effect of rectification on the reported net profit before correction of these errors.Ans: Ques 2: On going through the Trial balance of Ball Bearings Co. Ltd. you find that the debit is in excess by ₹150. This was credited to "Suspense Account". On a close scrutiny of the books the following mistakes were noticed:(1) The totals of debit side of "Expenses Account" have beeen cast in excess by ₹ 50.(2) The "Sales Account" has been totalled in short by ₹100.(3) One item of purchase of ₹25 has been posted from the day book to ledger as ₹250.(4) The sale return of ₹100 from a party has not been posted to that account though the Party's account has been credited.(5) A cheque of ₹500 issued to the Suppliers' account (shown under Trade payables) towards his dues has been wrongly debited to the purchases.(6) A credit sale of ₹50 has been credited to the Sales and also to the Trade receivables Account. You are required to(i) Pass necessary journal entries for correcting the above;(ii) Show how they affect the Profits; and(iii) Prepare the "Suspense Account" as it would appear in the ledger.Ans: 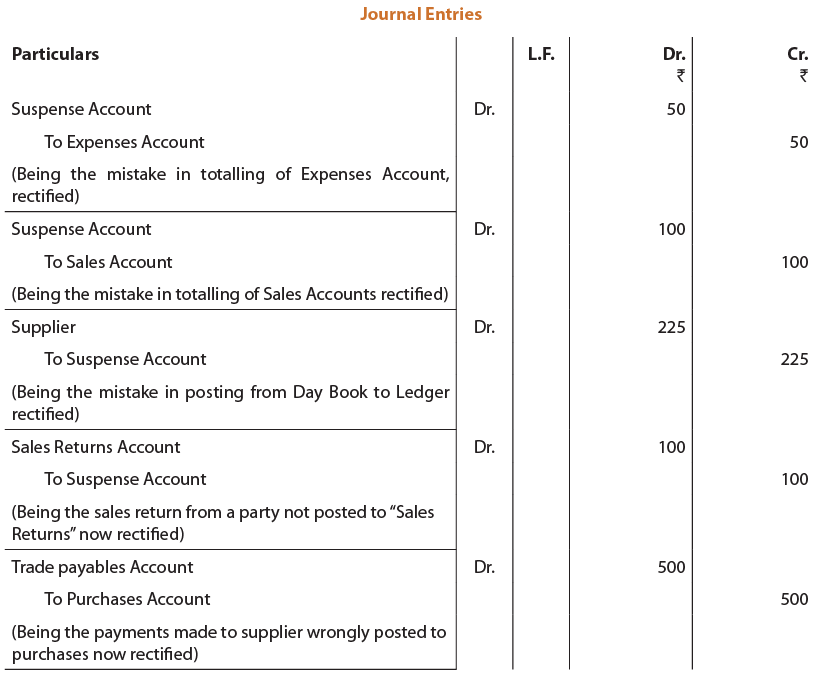 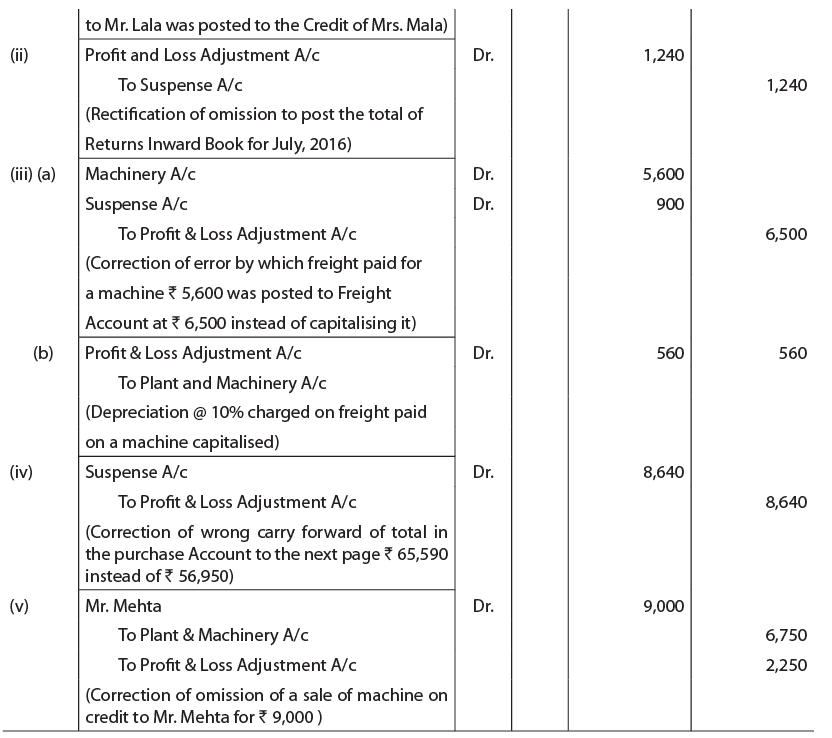