Use of following tips makes the subtraction and addition operation easy and less time consuming, in thismethod we change the numbers in the easy form and then we solve accordingly. Let’s take an example tounderstand this method.

SUM OF SERIESSometime we have to add many numbers which are in series, i.e. they are in certain fashion.For example,

METHODS FOR MULTIPLICATION OF NUMBER BY 5

METHODS FOR MULTIPLICATION BY 25

We know that 25 = 100 / 4, hence to ease the computation, multiply the number by 100 (it is very simple justput two zeroes at the end of the number) and then divide the number by 4.

METHODS FOR MULTIPLICATION BY 50As 50 =

, hence to ease the computation, multiply the number by 100 and then divide it by 2.

METHODS FOR MULTIPLICATION BY 125

, hence to ease the computation, multiply the number by 1000 (it is very simple just put three zeroes at the end of the number) and then divide the number by 8.

METHODS FOR MULTIPLICATION BY NUMBERS FROM 11 TO 19.

Step 1: Prefix a zero to the multiplicand so that it reads 0123. 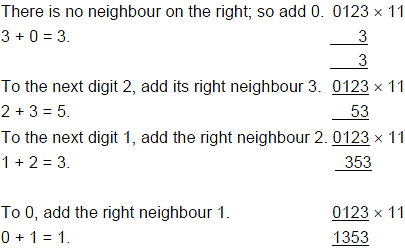 MULTIPLICATION BY 12The method is exactly the same as in the case of 11 except that you double each number beforeadding the right neighbour.

Step 1: Prefix a zero to the multiplicand so that it reads 013.

MULTIPLICATION FROM 13 TO 19The reason why the rule is different for multiplication by 11 and by 12 is obviously because the right digits aredifferent. The right digit, we could call the Parent Index Number (PIN). Thus in 11, the PIN is 1 and in 12 it is2. (In 13, it is 3; in 14, it is 4 etc.) When the PIN is 1, we are simply taking each figure of the multiplicand (wecould call this figure the Parent Figure - PF in short) as such and adding the right neighbour. When the PIN is2, we are doubling the PF and then adding the right neighbour.

Consider the conventional multiplication of two 2-digit numbers 12 and 23 shown below:

It is obvious from the above that

The working in our above example can therefore be depicted as

and can be summarized as

Like wise, when the tens figure is "one" in both the numbers being multiplied, you could obtain the middleterm by simply adding the units digit of the two numbers. For instance, the middle term in 12 × 17 is 2 + 7, i.e.9, in 8 × 12 it is 8 + 2 i.e. 10 etc.If the units figure or the tens figure is the same in the two numbers, the process of multiplication could besimplified as shown in the following examples:

Here's a rather complicated trick for calculating any two 2-digit numbers: Note: To do this trick, you need to know the squares of numbers up to 100 in advance.

1. Calculate the average of the two numbers.

2. Square your answer (here's where you need to know the squares of numbers through 100).

3. Subtract the largest of your original two numbers from the average.

5. Subtract it from your answer in step 2 for the final answer.

MULTIPLICATION OF 2 THREE-DIGIT NUMBERSLet us consider the multiplicand to be ABC and the multiplier to be DEF, as shown below:

The process is set out in detail for following examples below.

MULTIPLICATION OF NUMBERS OF DIFFERENT LENGTHSIn the examples we saw above, both the multiplicand and the multiplier contained the same number of digits.But what if the two numbers were to contain a different number of digits; for instance, how would we multiply286 and 78? Obviously we could prefix a zero to 78 (so that it becomes 078, a 3 digit number) and proceed asin any multiplication of two 3 digit numbers.

The following examples will clarify the procedure:

a. Take as base for the calculations that power of 10 which is nearest to the numbers to be multiplied.

b. Put the two numbers A and B above and below on the left hand side.

Few examples, which make the procedure clear, are:

The right hand side of the answer will be 1 × 3 = 3The left hand side can be computed either by subtracting 3 from 9 or 1 from 7 which is 6. Therefore, theanswer is 63.Numbers, which are close to 100The closest base in this case will be 100Therefore

The procedure is the same with only difference being that instead of subtracting the remainder of one numberfrom the other number, we add in this case as the number were marginally larger than the nearest power of10When the number of digits of the product of the remainders is greater than the power of 10 closest to the twonumbers

As the product of 16 and 8 is 128 which is a three digit number as against 2 being the power of 10 in100, wecarry forward the digits on the left more than 2 digits (in this case) and add to 76, the left hand side of theanswer

The operation is similar, excepting that as the right hand side of the answer is obtained by the multiplication ofa positive and a negative number the answer has to be subtracted from 100 by reducing the left hand sidenumber by 1. So the answer is 9504.

since 50 = 100/2. We divide the left hand side number also by 2 while retaining the right handside. Therefore the answer will be 1763.

Numbers that add up to 10

What are partially complementary numbers?

In such cases, a special method can be used. But before we see the new method, let us consider themultiplication of 23 by 27 by the method we had learnt. 23 × 27 would give us the answer as 621. Do younotice anything special about the answer? The right part is the product of the unit figures 3 and 7 of the 2numbers and the left part 6 of the answer is the product of 2 (the tens figure) and the next higher number 3.

SQUARES OF NUMBERSIt is often useful to know the squares of numbers without a calculator. For example, you have to paint theceiling of a room of 12'-6" × 12'-6". How much paint would you buy if a quart covers 8 square metres? Youwould reason as follows:

In general, it is quite possible that an average person would be able to give the squares of integers up to 100without a calculator. Some of the numbers are easily memorized, and the others can be obtained by certain'tricks'. This article provides some tools to memorize or calculate the square of some numbers. 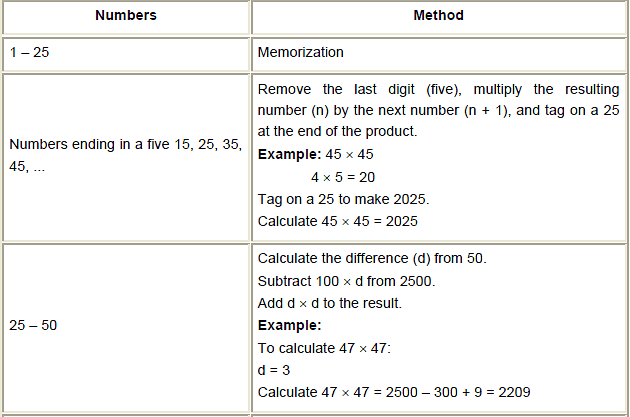 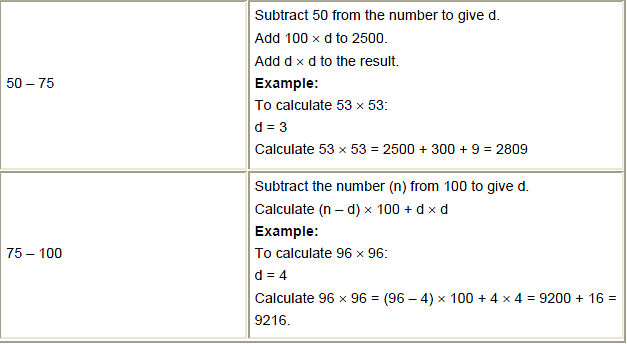 Some other Methods of Squaring 1. Let's start with numbers 11 - 19.I know, I know, 11 and 12 shouldn't pose any problem but anything higher than 13 was never aflashcard...Square the ones digit. This becomes your last digit.1. Multiply the ones digit by 2. This becomes your second digit.2. Retain the tens digit (i.e., 1) and append the above results.Take 172, for example.72 = 49. The 9 is your last digit. Carry the 4 to the left.7 x 2 = 14. The 4 (plus the 4 remaining from the first step) is your second digit, 8. As before carry the 1to the left.Retain the 1 from "17", add to it the 1 remaining from the previous step, and you get 289.Interesting but probably not as quick as simply multiplying the numbers.

Another Method for squaring any two digit number"a" is a digit in tens place. It is replaced by digits from 1 - 9.Procedures: 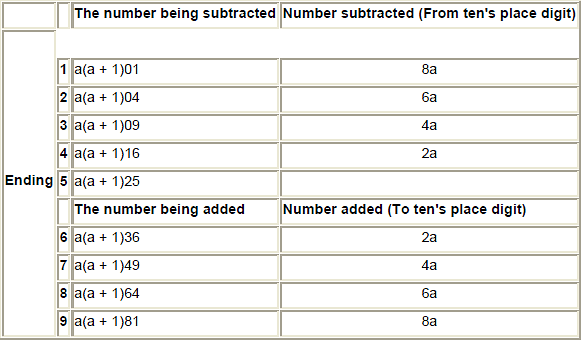 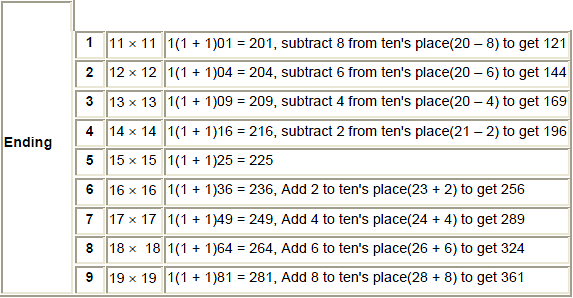 SQUARING NUMBERS ENDING IN 5An obvious extension of the above method will be in finding the square of numbers ending in 5. Consider 15 ×15. Here the sum of the units digit of the 2 numbers is the same. Hence, the above method will apply. Infact itwill apply in squaring any number ending in 5. Since in all these cases the right digit of the multiplicand andthe multiplier is 5, the right part of the answer is always 25 and therefore, we can mechanically set down 25 asthe right part of the answer without any calculation - all that is needed is to find out the left part of the answerand this done exactly as in the previous section.152 = 225

(2) Thus, they all have their own distinct endings; and there is no possibility of overlapping or doubt as inthe case of squares.

(3) Therefore, the last digit of the cube root of an exact cube is obvious: 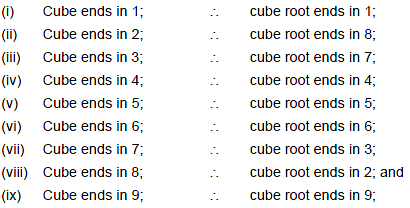 (5) The number of digits in a cube root is the same as the number of 3-digit groups in the original cubeincluding a single digit or a double-digit group if there is any:

APPROXIMATIONS OF SQUARE ROOTS TO TWO DECIMAL PLACESIf you have to calculate the square root of 90 fairly accurately, how do you do this quickly? Follow this thumbrule:(1) Find the integer whose square is nearest to 90.(We can take 9, as 92 = 81 is close to 90)

(3) Divide the resulting number by twice the value of the square root (i.e., 9)or,

We know that, if denominator of the all fractions is same, then fraction having bigger numerator is bigger invalue and having smaller numerator is smaller in value.Let’s take one example.

the first fraction is the smallest and the last one is the biggest.Also if the numerator of all fractions is same, then the fraction having bigger denominator is smaller in valueand vice versa.

, the first fraction is the biggest and the last one is the smallest.What happens when if neither numerator nor denominator of the fractions is same. We know in this case,basic method is by LCM method, i.e. making the denominator same. But we don’t know that we can evenmake the numerator same. So we have to check that whose LCM is easy to find out, depending upon thevalue of the numerators or the denominators.

Let’s understand it with the help of an example.

Here we can check that being the numerator same, last fraction is the biggest.

Comparison of the fractions, when they are in certain fashion.

When relationship between each of the numerator and denominator is same, difference between them issame and with same sign. It has two cases.

1. If each numerator is smaller than its denominator by same value. In this situation the fraction havingbigger digits will be bigger in value and vice versa.Let’s take one example:

Using above method we can easily compare all of them. Hence

is third biggest and

2. If each numerator is greater than its denominator by same value. In this situation the fraction havingbigger digits will be smaller and vice versa.Let’s take one example:

Using above method we can easily say

is second biggest and

Logical ComparisonThis shortcut more depends upon our logic. The basic requirement to use this method is, we should be able tocalculate the approximate value of the fraction.Let’s take one example

Now look at the first fraction, we see that denominator is 28 and half of the 28 is 14, 15 is greater than 14,hence value of this fraction is slightly more than

Similarly in second fraction, denominator is 34 and half of34 is 17, 16 is less than 17, hence value of this fraction is slightly less than

. Combining these two results we can judge that

PERCENTAGEBasic ShortcutThe most basic tip for the questions involving percentage is memorize the fractional equivalent of thepercentage. i.e.

Similarly, we can generate lot more.

This is something our teachers never taught us in school, and it would have helped a lot in everyday life -- A%of B = B% of A.