This is an asexual method of reproduction in plants where vegetative parts namely root, stem and leaves give rise to new plants.

Vegetative propagation is of two types :

(A) Natural vegetative propagation : Plant reproduce without the help of human beings. 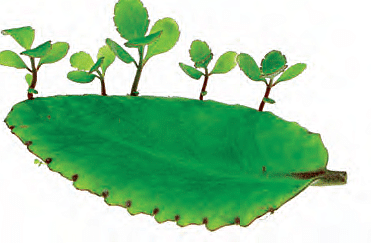 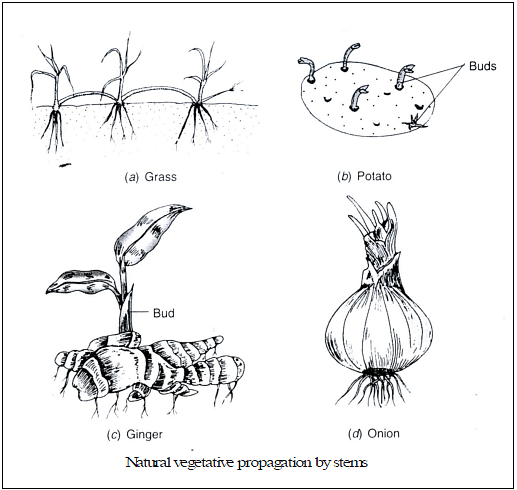 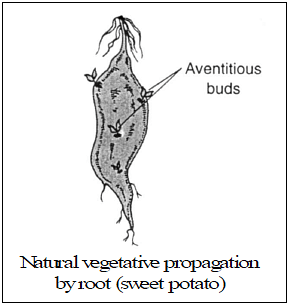 To prepare plants with desirable characters.

These are of four types:

(i) Cutting : In this method, small part of a plant is cut and buried partly in the moist soil then the cutting develops roots and grows into a new plant. e.g. Rose, Sugarcane, Potato, Cactus. 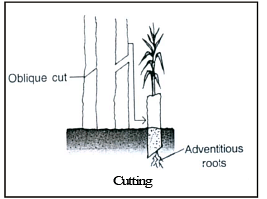 (ii) Grafting : Two plants of closely related varieties are joined together so that they live as one plant. The plant of which roots remain in the soil is called as stock. Cutting part of a plant that is grafted on the other rooted plant is called scion. 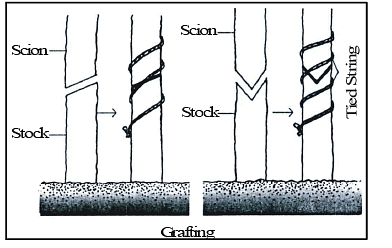 (iii) Layering : In this method, a branch of the parent plant is buried in the soil.

The portion of the branch which is connected with the soil produces roots and this rooted branch is called layer. Layer is then detached from the parent plant and act as a new plant. e.g. Jasmine, Hibiscus. 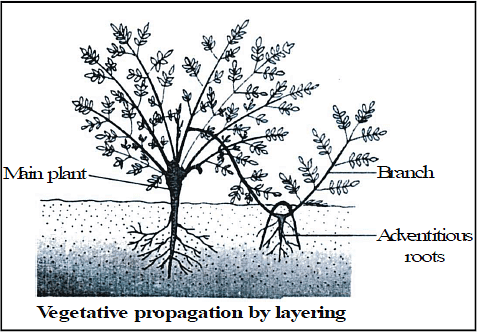 (iv) Tissue culture or micro-propagation:  Cells or tissues which are isolated from the growing tip of plant is called explant.

The explant develops into undifferentiated mass of cells called callus in the proper culture medium.

The callus is transferred to another medium containing hormones for growth and differentiation, that forms plantlet.

These plantlets are transplanted into pot or soil to form a mature plant.

This technique is known as micro-propagation. e.g. Orchids, Chrysanthemum.

It is a rapid, cheap and easy method of reproduction for the multiplication of plants.

Disease free plants can be produced.

Superior quality fruits or flowers can be produced by grafting.

Plants raised by vegetative propagation can bear flowers and fruits earlier than those produced from the seeds.

In fission the organism have lost their parental identity while in budding they have maintained their identity.

Grafting is not possible in monocot plants.

Cambium activity is essential for the union of stock and scion.

Tissue culture is also called micro-propagation because a large number of plants are formed from a small tissue.

It is a type of reproduction in which two different sexes (male and female) are involved. It involves the fusion of gametes from two different parents and results in the formation of new organism, which is genetically different from the parent.

Flower is a specialized condensed reproductive shoot of flowering plants on which the essential reproductive parts are inserted.

A typical flower has four whorls arranged on the thalamus. 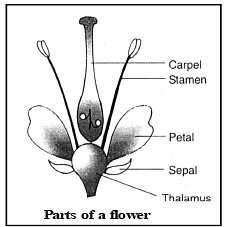 1. Calyx  It is the outermost whorl consisting of sepals. Sepals are green and leaf like structure. Calyx protect the flower bud before it opens. 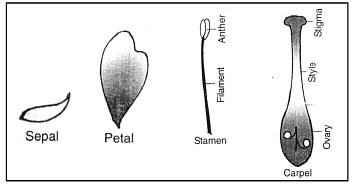 2. Corolla  It is the second whorl, inner to calyx, consisting of petals. Petals are generally large, coloured and showy. Corolla attracts insects for pollination.

3. Androecium  It is the third whorl, inner to corolla, consisting of male reproductive parts called stamens. Each stamen has two parts: Filament and anther. Anther is a lobed structure present at the tip of filament. Each anther has pollen sacs (microsporangia) which contains pollen grains (microspores).

4. Gynoecium  It is the fourth and innermost whorl consisting of carpels. Carpel is present in the centre of flower. Each carpel has three parts: Ovary, Style and Stigma.

Ovary is a swollen basal part of carpel. It contains ovules which are attached to placenta.

Each ovule contains an embryo sac that bears a haploid egg (female gamete).

Style is the middle part of the carpel. It has stigma above it and ovary below it.

Stigma is the apical part of carpel. It receives pollen grains. 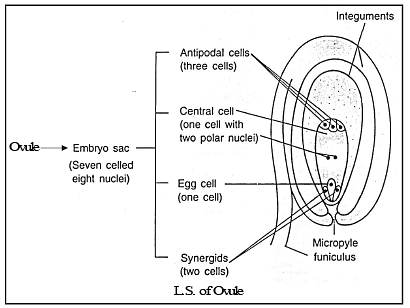 Pollination Process in which pollen grains are transferred from the riped anther to the stigma. It is of two types :

(ii) Cross pollination :- It is the transfer of pollen grains from anther to the stigma of different plants of the same species (e.g. Mango).

Agencies of pollination :- Transfer of pollen grains from one flower to another is achieved by agents like wind, water, animals, insects and birds.

Fertilization  Fertilization is the process of fusion of the male and female gametes, which takes place in the embryo sac present in the ovule.

After pollination, pollen grains germinate on the stigma by producing pollen tube.

The nucleus in the pollen tube divides into two male gametes.

Pollen tube penetrates the stigma and passes through the style and enters the ovule through micropyle. 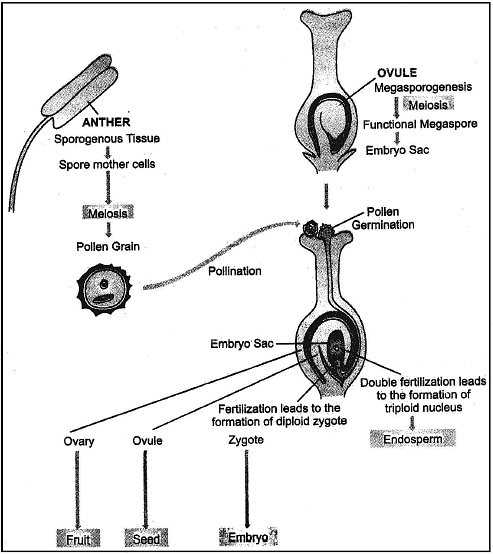 Sepals, petals and stamen withers off.

The seed contains the future plant or embryo which develops into a seedling under appropriate conditions.

Endospermic seed : If endosperm is not consumed.