The document Venn Diagrams - Introduction and Examples (with Solutions) Quant Notes | EduRev is a part of the DI Course IBPS Clerk Prelims - Study Material, Mock Tests.
All you need of DI at this link: DI

A Venn diagram (also called a set diagram or logic diagram) is a diagram that shows all possible logical relations between a finite collection of different sets. Typically overlapping shapes, usually circles, are used, and an area-proportional or scaled Venn diagram is one in which the area of the shape is proportional to the number of elements it contains. These diagrams represent elements as points in the plane, and sets as regions inside curves. An element is in a set S just in case the corresponding point is in the region for S. They are thus a special case of Euler diagrams, which do not necessarily show all relations. Venn diagrams were conceived around 1880 by John Venn. They are used to teach elementary set theory, as well as illustrate simple set relationships in probability, logic, statistics, linguistics and computer science. 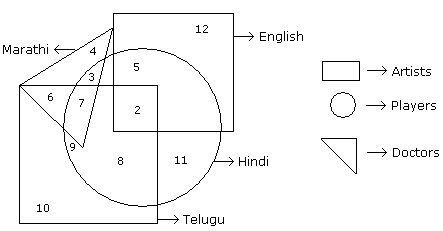 1. How many persons can speak English and Hindi both the languages only ?

Explanation:Number of persons who can speak English and Hindi both only is 5.

2. How many persons can speak Marathi and Telugu both ?

3. How many persons can speak only English ?

Explanation: Number of persons were can speak English is 12.

4. How many persons can speak English, Hindi and Telugu ?

Explanation :Number of persons who can speak English, Hindi and Telugu is 2.

5. How many persons can speak all the languages ?

Explanation: There is no such person who can speak all the languages.