Class 10 : Worksheet - 4: The Rise of Nationalism in Europe Notes | EduRev

The document Worksheet - 4: The Rise of Nationalism in Europe Notes | EduRev is a part of the Class 10 Course Social Studies (SST) Class 10.
All you need of Class 10 at this link: Class 10

ORWhat changes were brought due to Napoleon’s reforms and Code? What were the reactions to these changes?

Ans. NineteenthQ.11. Ottoman Empire was ruled by the ______.Ans. CaliphQ.12. Which of the following options best signifies this caricature? 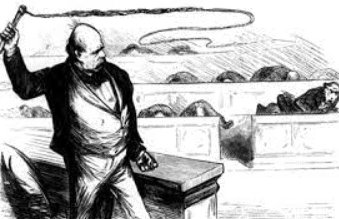 (vi) This led to nationalism and the emergence of the idea of the nation-state.Q.17. Describe the process of unification of Britain. Marks 5

ORHow was the history of nationalism in Britain unlike the rest of EuropeAns. Unification of Britain:(i) Britain was not a nation state prior to the 18th century. The primary identities were based on ethnicities such as English, Welsh, Scot or Irish.(ii) The steady growth of power made the English nation extend its influence over the other nations and islands.(iii) In 1688, England was established as a nation state. English parliament seized power from the monarchy.(iv) In 1707, the United Kingdom of Great Britain formed with the Act of the Union between England and Scotland.(v) England dominated Scotland and Ireland in all spheres. British parliament was dominated by English members.(vi) Ireland was forcibly taken by the British after the failed revolution led by Wolfe and his United Irishmen (1798). A new “British nation” was formed. (Any five)Q.18. Read the extract and answer the questions that follow.During the 1830s, Giuseppe Mazzini had sought to put together a coherent programme for a unitary Italian Republic. He had also formed a secret society called Young Italy for the dissemination of his goals. The failure of revolutionary uprisings both in 1831 and 1848 meant that the mantle now fell on Sardinia-Piedmont under its ruler King Victor Emmanuel II to unify the Italian states through war. In the eyes of the ruling elites of this region, a unified Italy offered them the possibility of economic development and political dominance.

Chief Minister Cavour who led the movement to unify the regions of Italy was neither a revolutionary nor a democrat. Like many other wealthy and educated members of the Italian elite, he spoke French much better than he did Italian. Through a tactful diplomatic alliance with France engineered by Cavour, Sardinia-Piedmont succeeded in defeating the Austrian forces in 1859. Apart from regular troops, a large number of armed volunteers under the leadership of Giuseppe Garibaldi joined the fray. In 1860, they marched into South Italy and the Kingdom of the Two Sicilies and succeeded in winning the support of the local peasants in order to drive out the Spanish rulers. In 1861 Victor Emmanuel II was proclaimed king of united Italy. However, much of the Italian population, among whom rates of illiteracy were very high, remained blissfully unaware of liberal-nationalist ideology. The peasant masses who had supported Garibaldi in southern Italy had never heard of Italia, and believed that ‘La Talia’ was Victor Emmanuel’s wife! Marks 5Questions: (i) Who formed a secret society called 'Young Italy'?(ii) Who led the movement to unify the regions of Italy? State any one quality of his character.(iii) According to the extract, what was the reason for a large part of Italian population remaining unaware of the liberal ideology?Ans. (i) Giuseppe Mazzini formed a secret society called ‘Young Italy’.(ii) Chief Minister Cavour led the movement to unify the regions of Italy. One quality of his character was that he was an extremely tactful diplomat.(iii) A large part of Italian population was illiterate, so it remained unaware of the liberal ideology.Q.19. Who was Cavour? Explain his contributions to the unification of Italy. Marks 3ORWrite a note on Count Camillo de Cavour. [NCERT]Ans. Cavour was the Chief Minister of SardiniaPiedmont.

His contribution to the unification of Italy was:(i) He was neither a revolutionary nor a democrat. He was a good administrator.(ii) He worked for the unification of Italy. Through a tactful diplomatic alliance with France.(iii) He led the movement to unify the regions of Italy.(iv) He was a tactful diplomat. He succeeded in defeating the Austrian forces in 1859. (Any two)Q.20. With reference to Scotland and Ireland, explain how British nationalism grew at the cost of other cultures.Ans. (i) Through the Act of Union (1707), England was able to impose its influence on Scotland.(ii) The growth of British identity in parliament suppressed the distinctive culture of Scotland.(iii) The Catholic clans that inhibited the Scottish Highland suffered repression.(iv) They were forcibly driven out of their homeland.(v) Ireland was also divided between Catholics and Protestants.(vi) Ireland was forcibly incorporated in the UK. (Any five)