Q.1. “The multinational companies (MNCs) choose China as an alternative location for investment?” Explain the statement. Marks 3Ans. (i) Since the revolution in 1949, China gradually came into the field of world economy. It attracted the foreign MNCs because of its lowest economic structure.(ii) Wages were relatively low.(iii) China had the largest population besides labour. They also formed a large consumer base.Q.2. Explain the following: (i) G-77 (ii) Great Depression of 1929. Marks 3Ans. (i) G-77 Organisation was formed by the former colonies to demand a New International Economic Order.(ii) It was a period of serious decline in production, employment, income and trade. 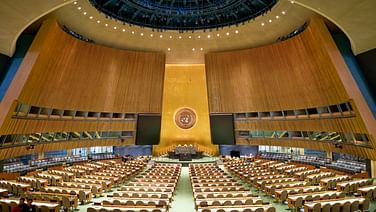 G-77 Headquarters Q.3. Explain the role of the New International Economic Order (NIEO). Marks 3Ans. The Group of 77 or G-77 demanded a New International Economic Order (NIEO). By the  NIEO they meant a system that would give them:(i) Actual control over their natural resources.(ii) More development assistance.(iii) Fairer prices for their raw materials.(iv) Better access for their manufactured goods in developed countries’ markets. (Any three)Q.4. When was the Bretton Woods conference convened? State the main aim of the conference. Marks 3ORDescribe the Bretton Woods Agreement.Ans. (i) The Bretton Woods Conference was convened in July, 1944 at Bretton Woods in New Hampshire, USA(ii) Its main aim was to preserve economic stability and full employment in the Industrial world.(iii) The Conference established the International Monetary Fund (IMF) and the International Bank for Reconstruction and Development (World Bank).Q.5. Describe the role of 'technology' in transformation of the world in the nineteenth century. Marks 5Ans. Role of technology:(i) The railways, steamships, and the telegraph for example were important inventions without which we cannot imagine the transformed nineteenth century world.(ii) Technology advances were often the result of larger social, political and economic factors.(iii) Colonization stimulated new investments.(iv) Improvement in transport.(v) Larger ships helped to move food more cheaply.(vi) Any other relevant point to be described.