Imagine having a fractured bone and not feel a thing. Or having burnt your finger, but without the sensation of pain. Sure, it sounds very ideal and quite the superpower, but from a survival standpoint, it could be disastrous.

Pain is the body’s way of letting us know that something is not right. It can prevent further injuries or push us to seek medical attention. And all of this is possible because humans can respond and react to stimuli due to control and coordination among the various organs and organ systems.

What is the Nervous System?

The nervous system or the neural system is a complex network of neurons specialized to carry messages. The complexity of the nervous system increases as we move towards higher animals. For instance, cnidarians such as jellyfish have relatively simple nerve nets that are spread throughout their body. Crabs have more complicated nervous system in the form of 2 nerve centres called dorsal ganglion and ventral ganglion. As we move further up the ladder, higher organisms such as vertebrates have developed the brain. And it is one of the most complicated structures in the animal kingdom, containing billions of neurons, all intricately connected with each other.

In the human body, the neural system integrates the activities of organs based on the stimuli, which the neurons detect and transmit. They transmit messages in the form of electrical impulses and convey messages to and from the sense organs. Thus, the nervous coordination involves the participation of the sense organs, nerves, spinal cord, and brain.

One of the most complex organ system to ever evolve, the nervous system consists of two parts, namely: 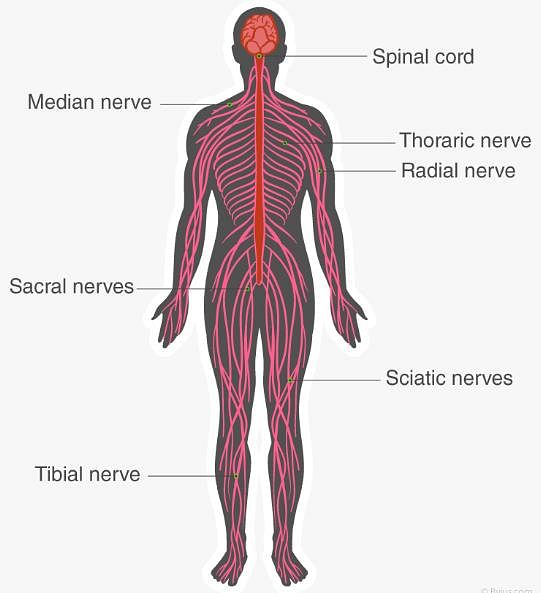 Nerves are thread-like structures that emerge from the brain and spinal cord. It is responsible for carrying messages to all the parts of the body. There are three types of nerves. Some of these neurons can fire signals at speeds of over 119 m/s or over 428 km/h.