Fig 4.1.3 illustrates how a number of full adders can be combined to make a parallel adder, also called a ‘Ripple Carry Adder’ because of the way that any carry appearing at the carry in input (CIN) or produced when adding any of the 4-bit inputs, ‘ripples’ along the adder stages until a final carry out appears at the carry out output (COUT) of the final full adder for bit A3+B3. 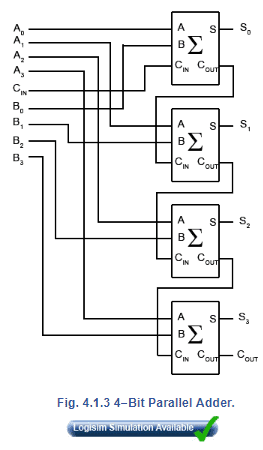 To carry out arithmetic however, it is also necessary to be able to subtract. A further development of the parallel adder is shown in Fig.4.1.4. This is an 8-bit parallel adder/subtractor. This circuit adds in the same way as the adder in Fig. 4.1.3 but subtracts using the twos complement method described in Digital Electronics Module 1.5 (Ones and Twos Complement).

When subtraction is required, the control input is set to logic 1, which causes the bit at any particular B input to be complemented by an XOR gate before being fed to input B of the full adder circuit.

Twos complement subtraction in an 8-bit adder/subtractor requires that the 8-bit number at input B is complemented (inverted) and has 1 added to it, before being added to the 8-bit number at input A. The result of this will be an 8-bit number in twos complement format, i.e. with its value represented by the lower 7 bits (bit 0 to bit 6) and the sign represented by the most significant bit (bit 7). The logic 1 on the control input is therefore also fed to the first carry input of the adder to be included in the addition, which for subtraction is therefore:

(Here + signifies addition rather than OR)

Alternatively, if addition of A and B is required, then the control input is at logic 0 and number B is fed to the adder without complementing.

How an XOR gate is used here to change the adder into a subtractor by inverting the B inputs can be seen from the truth table for an XOR gate, shown in Table 4.1.3 (in Fig. 4.1.5). Notice that if input A, (used as the CONTROL input) of the XOR gate is at logic 0, then the XOR gate selects input B, but if input A is logic 1, then it selects the inverse of input B (i.e.B). 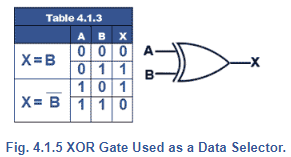 The 8-bit adder/subtractor illustrated in Fig. 4.1.4 is designed to add or subtract 8−bit binary numbers using twos complement notation. In this system the most significant bit (bit 7) is not used as part of the number’s value, it is used to indicate the sign of the number (0 = positive and 1 = negative).

No matter what the word size of a digital system (8-bits 16-bits 32-bits etc.), a given number of bits can only process numbers up to a maximum value that can be held in its designed word length.

During arithmetical operations it is possible that adding two numbers (with either positive or negative values) that are both within the system’s limit, can produce a result that is too large for the system’s word length to hold.

For example, in a twos complement adder such as shown in Fig. 4.1.4, when adding either positive or negative 7-bit values, the result could be larger than 7 bits can accommodate. Therefore the result will need to occupy one extra bit, which means that the calculated value will "overflow" into bit eight, losing a major part (12810) of the value and changing the sign of the result.

To overcome this problem, it is necessary first to detect that an overflow problem has occurred, and then to solve it either by using additional circuits or, in computing, by implementing a corrective routine in software.

Fortunately there is a quite simple method for detecting when an overflow occurs. As shown in Fig. 4.1.5 the overflow detection system consists of a single exclusive or (XOR) gate that takes its inputs from the carry in and carry out connections of the bit 7 (sign bit) adder.

Table 4.1.5 shows a twos complement subtraction performed by adding a negative number to a positive number. The result is 3110 (within the range 0 to +12710), the sign bit is 0 indicating positive result, CIN and COUT are both 1, so no overflow is detected and the carry bit will be discarded.

Table 4.1.6 shows the effect of adding two negative values where the sum is less than +12710 therefore a correct negative result of −7310(in twos complement notation) has been obtained. Both CIN and COUT are logic 1 and no overflow will be signalled. As only 8−bit calculations are being considered, the carry will be discarded.

Out of Range Result Causes Overflow

When the addition of two positive numbers shown in Table. 4.1.7 results in a sum greater than +12710 the sign bit is changed from 0 to 1, incorrectly signifying a negative result.  As the ‘carry in’ from bit 6 to bit 7 is 1 and the ‘carry out’ from bit 7 into the Carry bit is 0 an overflow is detected indicating an incorrect answer.

Notice that if the result of 100111012 were to be considered as an unsigned binary value, the addition in Table 4.1.7 would be correct (15710). However as the calculation is using twos complement notation, the answer of −9910 must be considered as wrong.

Out of Range Addition of Negative Values

Table 4.1.8 shows that adding two negative values can also produce a change in sign and a wrong twos complement result if it is greater than −12810. In this case adding −6310 and −7310 should have produced a negative result of −13610 and not +12010. To check this, the correct answer (although still with the wrong sign) could be obtained if, noting that an overflow had occurred, the answer was complemented and 1 added, giving an unsigned binary result of 100010002 which converts to 128 + 8 = 13610. Overflow errors can be corrected, but this would require either some additional electronics or a software action in response to the overflow signal.