The document Abnormal Molar Masses JEE Notes | EduRev is a part of the Class 12 Course Chemistry for JEE.
All you need of Class 12 at this link: Class 12

So, how do we determine the molecular mass of solute in case the above assumptions are not valid? Basically, the abnormality is due to:

(i) Association of Solute Particles

NaCl dissociate into two ions when dissolved in water

Such a molar mass, whose value is higher or lower than its expected value is known as Abnormal Molar Mass. For Example, weak electrolytes dissociate in water to form ions, example Hydrofluoric Acid (HF), dissociate into hydrogen cation and fluorine anion.VAN’T HOFF FACTORTo determine colligative properties for solutions which undergo association and dissociation, a Dutch physical chemist Jacobus Henricus van’t Hoff in the year 1880 introduced the concept of Van’t Hoff Factor i to sort out association and dissociation problem while calculating the molar mass of solute.The Van’t Hoff factor is denoted by ‘i’ and is obtained when we divide normal mass with an abnormal mass of solute. Mathematically, it is represented in three forms:i = Normal Molar Mass/Abnormal Molar Massi = Observed Colligative property/Calculated Colligative propertyi = Total Number of Moles of Particles after Association/Dissociation / Total Number of Moles of Particles before Association / DissociationThus, the value of i depends upon the state of solute in the solution.

MODIFIED EQUATIONS FOR COLLIGATIVE PROPERTIESFor solutes which undergo dissociation or association in solutions, the equations for the colligative properties are modified by inserting the van'tHoff's factor in them as follows:

Assuming the solution to be highly dilute, Tb would be very close to Tb.

Ignoring n in comparison to N in the denominator 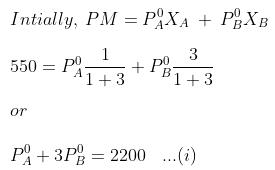 When, one mole of B is further added to it,

For the dissociation of an electrolyte producing n ions,

where πglucose = osmotic pressure of glucose

As both solutions are isotonic,∴ πKCl = πglucose