The document Doc: Adsorption Isotherms Class 12 Notes | EduRev is a part of the Class 12 Course Chemistry Class 12.
All you need of Class 12 at this link: Class 12

The variation of adsorption with pressure at a constant temperature is called adsorption isotherm.

Freundlich, in 1909, gave an empirical relationship between the quantity of gas adsorbed by unit mass of solid adsorbent and pressure at a particular temperature. The relationship can be expressed by the following equation. 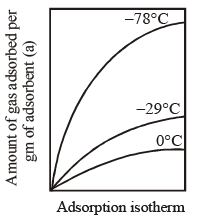 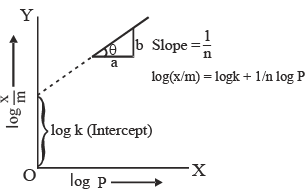 (a) There is adsorption of gas molecules on the surface of the solid.

(b) There is desorption of the adsorbed molecules from the surface of the solid.

(e) A dynamic equilibrium is attained when rate of adsorption = rate of desorption.

(f) Based on the above facts, langmuir adsorption isotherm is represented as

This is shown along OA