The document Alkynes (Properties and Nomenclature) Class 11 Notes | EduRev is a part of the JEE Course Chemistry for JEE.
All you need of JEE at this link: JEE

Alkynes are not as common in nature as alkenes, but some plants do use alkynes to protect themselves against disease or predators. Acetylene is by far the most important commercial alkyne. Acetylene is an important industrial feedstock but its largest use is as the fuel for the oxyacetylene welding torch.

2. Structure and Bonding in Alkynes

(2) Alkynes are also called acetylenes because they are derivatives of acetylene.

(7) Overlapping of these sp hybrid orbitals with each other and with the hydrogen orbitals gives the sigma bond framework which is linear (180º) structure.

(8) Two p bonds result from overlap of the two remaining unhybridized p orbitals on each carbon atom. These orbitals overlap at right angles (90º) to each other, forming one p bond with electron density above and below the C - C sigma bond, and the other with electron density in front and in back of the sigma bond. This result in a cylindrical p electron cloud around s bonded structure

Note : Any type of stereoisomerism does not arise in acetylenic bond due to linearity of C º C bond.

Ex.1 Cis-trans isomerism is not possible in alkynes because of :

(1) Alkynes are relatively nonpolar (w.r.t. alkyl halides and alcohols) and are nearly insoluble in water (but they are more polar than alkenes and alkanes). They are quite soluble in most organic solvents, (acetone, ether, methylene chloride, chloroform and alcohols).

(2) Acetylene, propyne, and the butynes are gases at room temperature, just like the corresponding alkanes and alkenes. In fact, the boiling point of alkynes are nearly the same as those of alkanes and alkenes with same number of carbon atoms. 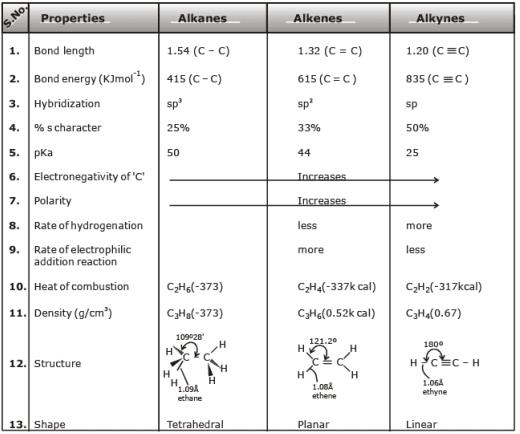 When triple bond comes at the end of a carbon chain. The alkyne is called a terminal alkyne.

Terminal alkynes are much acidic than other hydrocarbons due to more electronegative sp hybridized carbon. The polarity (acidity) of a C - H bond varies with its hydridization, increasing with the increase in percentage's character of the orbitals.

The hydrogen bonded to the carbon of a terminal alkyne is considerably more acidic than those bonded to carbons of an alkene and alkane (see section). The pKa values for ethyne, ethene & ethane illustrate this point

The order of basicity of their anions is opposite to that of their relative acidity:

The dehydrohalogenations occur in two steps, the first yielding a bromoalkene and the second alkyne.

Ex.5 Give the structure of three isomeric dibromides that could be used as starting materials for the preparation of 3,3-dimethyl-1-butyne.

Ex.6 Show the product in the following reaction

Give the mechanism of this rearrangement.

(II) By Dehalogenation of Tetrahaloalkane:

(III) Replacement of The Acetylenic Hydrogen atom of terminal Alkynes.

Sodium ethynide and other sodium alkynides can be prepared by treating terminal alkynes with sodium amide in liquid ammonia.

The following example illustrates this synthesis of higher alkyne homologues.

(R'-X must be an unhindered primary halide or tosylate)

The unshared electron pair of the alkynide ion attacks the back side of the carbon atom that bears the halogen atom and forms a bond to it. The halogen atom departs as a halide ion.

Ex.7 Show how to synthesize 3-decyne from acetylene along with necessary alkyl halides.

Q.5 Show how you would synthesize the following compound, beginning with acetylene and any necessary additional reagents.

(V) By Hydrolysis of carbides

(i) Acidic Character Of Alkynes

Alkynes are one of the simplest hydrocarbons known to us. They have a general formula of CnH2n-2. Alkynes belong to the family of unsaturated hydrocarbons that is; they contain both sigma and pi bond linkages between carbon and hydrogen.

The catalyst that is involved in the case of rhodium, nickel, palladium, and platinum. Hydrogenation is a step-by-step process in which initially an alkene is formed. After which it undergoes further hydrogenation to form an alkane Slowing down the reaction in the intermediate stage is actually quite impossible as the whole reaction is really smooth. But some alkenes are isolated with the use of poisoned catalysts. One such example of a poisoned catalyst is the Lindlar catalyst.

Lindlar catalyst is the combined form of palladium which is coated with quinoline and absorbed on calcium carbonate.

Ex.9 Explain why alkynes are less reactive than alkenes toward addition of Br2.

Sol. The three memebered ring bromonium ion fromed from the alkyne (A) has a full double bond causing it to be more strained and less stable than the one from the alkene (B).

Also, the C's of A that are part of the bormonium ion have more s-character than those of B, further making A less stable than B.

Alkynes are immiscible in water. They do not react with water under normal conditions. Alkynes may react with water in the presence of dilute sulphuric acid and mercuric sulphate at a temperature of 333K. This results in the formation of carbonyl compounds. Thin-film of polyacetylene can be used as electrodes in batteries. These films are good conductors, lighter and cheaper than metal conductors.

(b) Cyclic polymerisation: Ethyne on passing through a red hot iron tube at 873K undergoes cyclic polymerization. Three molecules polymerise to form benzene, which is the starting molecule for the preparation of derivatives of benzene, dyes, drugs and large a number of other organic compounds. This is the best route for entering from aliphatic to aromatic compounds as discussed below:

(b) By Brich reduction

Ex.8 Identify (X) and (Y) in the following reaction