The document Basic Terms and Types of Ligands Class 12 Notes | EduRev is a part of the Class 12 Course Chemistry for JEE.
All you need of Class 12 at this link: Class 12

Werner’s Experiment: By mixing AgNO3 (silver nitrate) with CoCl3·6NH3, all three chloride ions got converted to AgCl (silver chloride). However, when AgNO3 was mixed with CoCl3·5NH3, two moles of AgCl were formed. Further, on mixing CoCl3·4NH3 with AgNO3, one mole of AgCl was formed.

Based on this observation, the following Werner’s theory was postulated: 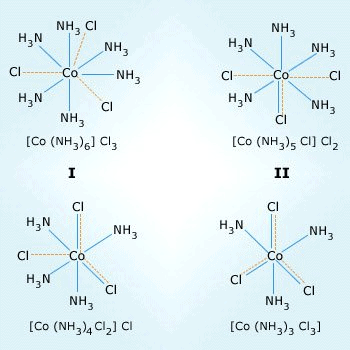 Difference between Primary and Secondary Valency in Coordination Compounds: 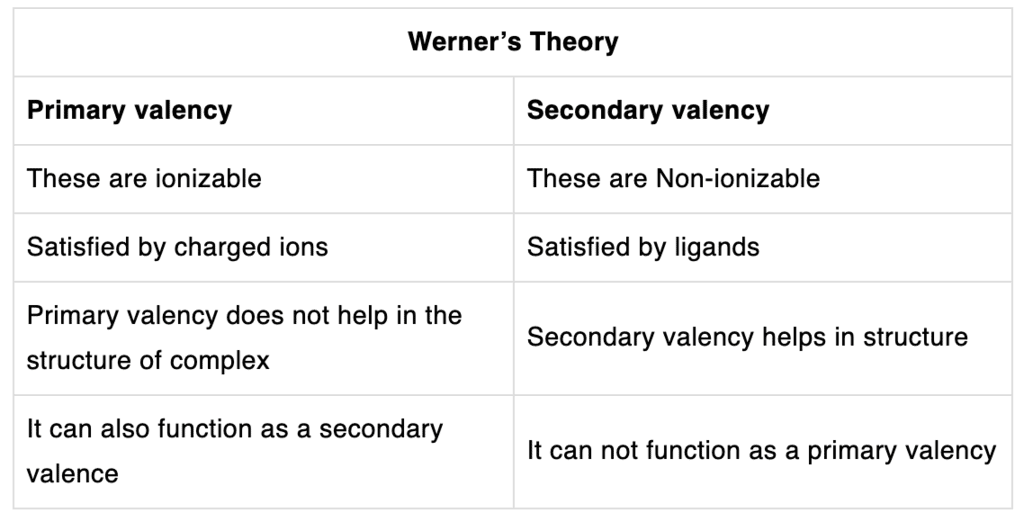 Try yourself:What was the term proposed by Werner for the number of groups bound directly to the metal ion in a coordination complex?
Explanation

The primary valence of a metal ion is also known as its oxidation number. The secondary valence is equal to the coordination number and it is fixed for a metal. Coordination polyhedra are the term for the spatial arrangements of the groups/ions around the metal.

A chemical compound in which the central ion or atom (or the coordination centre) is bound to a set number of atoms, molecules, or ions is called a coordination entity.

The atoms, molecules, or ions that are bound to the coordination centre or the central atom/ion are referred to as ligands. These ligands can either be a simple ion or molecule (such as Cl– or NH3) or in the form of relatively large molecules, such as ethane-1,2-diamine (NH2-CH2-CH2-NH2). The non-ionizable part of a complex compound consists of a central transition metal ion surrounded by neighbouring atoms or groups enclosed in a square bracket.

The oxidation number of the central atom can be calculated by finding the charge associated with it when all the electron pairs that are donated by the ligands are removed from it.

Example: The oxidation number of the platinum atom in the complex [PtCl6]2- is +4.

Heteroleptic Complex: When the central atom is bound to many different types of ligands, the coordination compound in question is called a heteroleptic complex, an example for which is [Co(NH3)4Cl2]+.

Those which retain their identity in solutions are called double salts. For example.

Those who lose their identity in solution (complexes). For example.

When crystals of carnallite are dissolved in water, the solution shows properties of K+, Mg2+  and Cl- ions. In a similar way, a solution of potassium alum shows the properties of K+, Al3+  and SO42- ions. These are both examples of double salts which exist only in the crystalline state. When the other two examples of coordination compounds are dissolved they do not form simple ions, Cu2+, Fe2+  and CN-, but instead, their complex ions are formed. Outside region apart from coordination sphere is called ionisation sphere.1. Central metal atom/ion: Central ion acts as an acceptor (Lewis acid) and has to accommodate electron pairs donated by the donor atom of the ligand, it must have empty orbitals. This explains why the transition metals having empty d-orbitals form co-ordination compounds readily. Thus, in complexes [Ni(NH3)6]2  and [Fe(CN)6]3-, Ni2  and Fe3  respectively are the central metal ions.

The ligands are thus Lewis bases and the central metal ions and n atoms are Lewis acids. 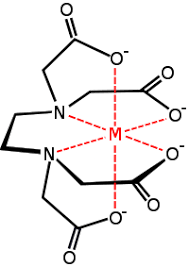 Ligands can be of the following types depending on the number of donor atoms pesent in them. (i) Mono / Unidentate Ligands They have one donor atom, i.e., they can donate only one electron pair to the central metal atom /ion eg., F-, Cl-, Br-, H2O, NH3, CN-,NO2-, OH-,

(ii) Bidentate Ligands Ligands which have two donor atoms and have the ability to link with the central metal atom /ion at two position are called bidentate ligands e.g.

(vi) Hexadentate Ligands They have six donor atoms. The most important example is the ethylenediaminetetraacetate ion. (viii) Ligands having more than two donor atoms are called polydentate or multidentate ligands. Multidentate ligands are known as a chelating ligand, it results in the formation of a stable cyclic ring thus, the complexes formed are also called chelates. Chelating ligands are usually organic compounds.3. Co-ordination sphere The central metal atom and the ligands directly attached to it are collectively termed as the coordination sphere. The coordination sphere is written inside square brackets, for examples, [Co(NH3)6]3+. Remember that the central metal atom and the ligands inside the square brackets, behave as a single entity. Examples of complexes of various co-ordination numbers
Try yourself:Which of the following is a complex salt?
Explanation

5. Oxidation number/oxidation state (O.S.) of central metal ion It is a number(numerical value) that represents the electric charge on the central metal atom of a complexion. for example the oxidation number of Fe, CO and Ni in [Fe(CN)6]4-, [Co(NH3)6]3  and Ni(CO)4 are 2, 3 and zero, respectively. Let us take a few examples to illustrate this.

(i) Potassium Ferrocyanide, K4[Fe(CN)6] Since the complex has four monovalent cations outside the coordination sphere, the complex ion must carry four negative charges, i.e., it is [Fe(CN)6]4-. The number of CN- ion (univalent ion), that is 6 represents the coordination number of Fe cation. The oxidation state of iron can be determined easily as below, knowing that cyanides ions are unidentate and the complex, on the whole, carries a -4 charge.

(ii) [Cr(C2O4)3]3- Note that here the oxalate ligand is a negative ion, that is it is bidentate. Therefore three oxalate ligands carry a total charge of -6 and the coordination number of Cr is 6. Now since the complex carries a -3 charge, therefore the oxidation state of Cr is 3.

(iii) Ni(CO)4 Here the coordination number of Ni is 4 since the carbonyl group is unidentate. Further, since the complex, as well as the ligands, has no charge, the nickel atom must also be neutral, that is it is in zero oxidation state.

of a nearest noble gas. This total number of electrons is called the effective atomic number (EAN) of the metal /ion.

The atomic number of cobalt = 27

In the present complex, cobalt is present in the oxidation state of 3.

In the above example since the number 36 corresponds to the atomic number of krypton, according to Sidgwick, the complex will be stable. Though the EAN rule (which states that those complexes are stable whose EAN is the same as the atomic number of the next noble gas) is applicable in many metal carbonyl complexes, however, there are several examples in which the EAN rule is not obeyed.