The document Bernoulli's Equation Class 11 Notes | EduRev is a part of the Class 11 Course Physics Class 11.
All you need of Class 11 at this link: Class 11

It relates the variables describing the steady laminer of liquid. It is based on energy conservation.

The fluid is incompressible, non-viscous, non rotational and streamline flow.

According to equation of coutniuity

Magnus effect : When a spinning ball is thrown, it deviates from its usual path in flight. This effect is called Magnus effect and plays an important role in tennis, cricket and soccer, etc., as by applying appropriate spin the moving ball can be made to curve in any desired direction.

If a ball is moving from left to right and also spinning about a horizontal axis perpendicular to the direction of motion as shown in figure, then relative to the ball air will be moving from right to left.

The resultant velocity of air above the ball will be (V rw) while below it (V -rw) (shown figure). So in accordance with Bernoulli's principle pressure above the ball will be less than below it. Due to this difference of pressure an upward force will act on the ball and hence the ball will deviate from its usual path OA0 and will hit the ground at A1 following the path OA1 (figure shown) i.e., if a ball is thrown with back spin, the pitch will curve less sharply prolonging the flight.

Similarly if the spin is clockwise, i.e., the ball is thrown with top-spin, the force due to pressure difference will act in the direction of gravity and so the pitch will curve more sharply shortening the flight.

Furthermore, if the ball is spinning about a vertical axis, the curving will be sideays as shown in figure. producing the so called out swing or in swing.

Action of Atomiser : The action of aspirator, carburettor, paint-gun, scent-spray or insect-sprayer is based on Bernoulli's principle. In all these by means of motion of a piston P in a cylinder C high speed air is passed over a tube T dipped in liquid L to be sprayed. High speed air creates low pressure over the tube due to which liquid (paint, scent, insecticide or petrol) rises in it and is then blown off in very small droplets with expelled air.

Working of Aeroplane : This is also based on Bernouilli's principle. The wings of the aeroplane are having tapering as shown in figure. Due to this specific shape of wings when the aeroplane runs, air passes at higher speed over it as compared to its lower surface. This difference of air speeds above and below the wings, in accordance with Bernoulli's principle, creates a pressure difference, due to which an upward force called ' dynamic lift' ( = pressure difference × area of wing) acts on the plane. If this force becomes greater than the weight of the plane, the plane will rise up.

from Bernoulli's equation. We can write on applying Bernoulli theorem at A and B 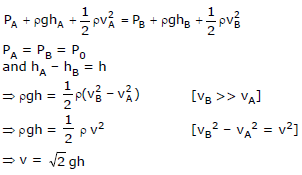 Let us find the range R on the ground.

Considering the vertical motion of the liquid.

From the expression of R, following conclusions can be drawn,

This can be shown as in Figure 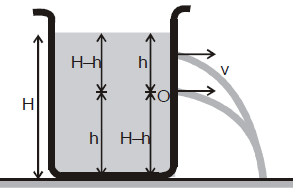 Ex.16 A cylindrical dark 1 m in radius rests on a platform 5 m high. Initially the tank is filled with water up to a height of 5 m. A plug whose area is 10–4 m2 is removed from an orifice on the side of the tank at the bottom Calculate

(a) initial speed with which the water flows from the orifice

(b) initial speed with which the water strikes the ground and

(d) Does the time to be emptied the tank depend upon the height of stand.

Sol. The situation is shown in figure 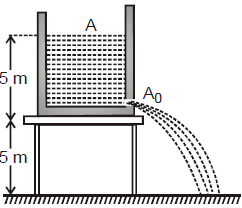 (a) As speed of flow is given by

So the initial speed with which water strikes the ground.

(c) When the height of water level above the hole is y, velocity of flow will be

and so rate of flow

Which on integration improper limits gives

(d) No, as expression of t is independent of height of stand. Figure shows a venturimeter used to measure flow speed in a pipe of non - uniform cross-section. We apply Bernoulli's equation to the wide (point 1) and narrow (point 2) parts of the pipe, with h1 = h2

From the continuity equation

Substituting and rearranging, we get

Because A1 is greater than A2 , v2 is greater than v1 and hence the pressure P2 is less than P1. A net force to the right acceleration the fluid as it enters the narrow part of the tube (called throat) and a net force to the left slows as it leaves. The pressure difference is also equal to ρgh, where h is the difference in liquid level in the two tubes. Substituting in Eq. (1), we get

It is a device used to measure flow velocity of fluid. It is a U shaped tube which can be inserted in a tube or in the fluid flowing space as shown in figure shown. In the U tube a liquid which is immiscible with the fluid is filled upto a level C and the short opening M is placed in the fluid flowing space against the flow so that few of the fluid particles entered into the tube and exert a pressure on the liquid in limb A of U tube. Due to this the liquid level changes as shown in the figure show.

At end B fluid is freely flowing, which exert approximately negligible pressure on this liquid. The pressure difference at ends A and B can be given by measuring the liquid level difference h as

It is a gas, then

It if the liquid of density , then

Now by using equations, we can evaluate the velocity v, with which the fluid is flowing.

let velocity of outflow is v and the pipe is of uniform cross-section A. Applying Bernoulli's Equation between P (top of tank) and R (Opening of pipe) we get

Naturally for siphon to work