• Definition: Blood pressure is the pressure exerted by the flowing blood on the walls of blood vessel.

• The instrument by which we can measure B.P. is called "sphygmomanometer".

• In humans, B.P. is measured in the branchial artery of arm.

In double circulation, the blood passes twice through the heart to supply once to the body.

In this, blood completes its circulation from left ventricle to right auricle through the body organs. (systemic organs)

In this, blood completes its circulation from right ventricle to left auricle through the lungs. 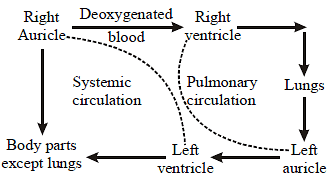 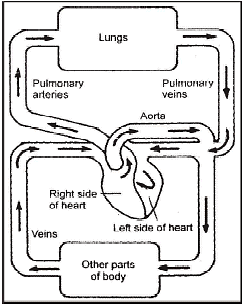 The separation of the right side and the left side of the heart is useful to keep oxygenated and de-oxygenated blood from mixing.

Single circulation:In this, the blood passes once through the heart to supply once to the body.

It is found in fishes which have two-chambered heart, one auricle and one ventricle. The heart receives only deoxygenated blood, which is first pumped to the gills for oxygenation and then oxygenated blood is supplied to rest of the body parts by various arteries.

Lymph: When blood flows into thin capaillaries some amount of plasma filters out of thin capillaries. This fluid is called interstital fluid or tissue fluid  or lymph. Lymph is also called extracellular fluid.

It is colourless and contains lymphocyte cells. Unlike blood, lymph does not contain red blood corpuscles, but contains less plasma protein. Lymph flows only in one direction, that is from tissues to heart.

The functions of lymph are as under:

• Thrombosis:- Thrombosis is the formation of a small blood clot or thrombus inside a blood vessel. A blood clot, or any other solid particle floating in the blood stream is known as an embolism.

• Atheroma: Blood flow along an artery is sometimes slowed or stopped altogether by a layer of fatty substance called cholesterol, stuck to the artery walls. This type of blockage is called an atheroma. Arteriosclerosis and atheroma are very dangerous when they occur in the heart or brain.

• Angina pectoris: If one or both of the coronary arteries is partly blocked due to atheroma, heart muscle is unable to work properly during exercise. This cause pains in the chest known as angina pectoris.

• Stroke: A stroke, or cerebral thrombosis, is a blood clot in the brain. The blood clot suddenly blocks an artery inside the brain causing the region served by this vessel to stop working, and dies. The results of a stroke depend on the area of the brain affected. Muscles may be paralysed, and speech or memory may be affected. Death occurs if the brain damage is extensive.

Prevention of circulatory diseases: Studies have shown that these diseases occur far less often among people:-

3. Who never drink alcohol or drink only moderate amounts.

5. Who have seven or eight hours sleep a night.

The document Transportation in Human Beings: Blood Pressure & Lymphatic System Notes | Study Science Class 10 - Class 10 is a part of the Class 10 Course Science Class 10.
All you need of Class 10 at this link: Class 10
Join Course