The document Blood Relationship and Coded Relationship CLAT Notes | EduRev is a part of the CLAT Course Logical Reasoning for CLAT.
All you need of CLAT at this link: CLAT

Generally, two types of questions are asked in the examinations:

These are based on direct relationships and the student is expected to see through and find out the exact relationship between the two persons.

So the person is talking about himself & photograph is of his ‘own’.Example 4: Pointing to a photograph, a person says that this is photograph of only daughter in law of his son’s mother. Whom is he talking about?Solution. If we follow the statement and draw the diagram as follow: 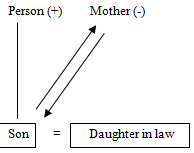 (i) Man’s daughter in law is his Son’s wife.(ii) Her husband is the son of that man (speaker).(iii) Son’s grandfather is the speaker’s father.(iv) Photograph is that of ‘father’ of man.Example 6: A lady states that this is a photograph of only daughter of ‘father- in – law’ of her husband. Whom is she talking about?Solution. If we draw the diagram using the above information, it follows as under:

Since father in law has only one daughter, the lady is wife of the husband she is talking about. It means that it is her own photograph.

Based on the information given to us, it is possible to solve questions based on Blood Relationships easily in two ways:(i) Pictorial method(ii) Analytical methodThe student should start with Pictorial method and after they have clearly understood the pattern, should follow Analytical method to solve the question quickly or easily.Table: The following chart will help you to solve questions in blood relationship. Try yourself:Pointing to a photograph. Bajpai said, "He is the son of the only daughter of the father of my brother." How Bajpai is related to the man in the photograph?
Explanation

Therefore, P is the maternal uncle of Q.

To solve such questions:

Example 3: John introduces Mary as the daughter of the only son of my father’s wife. How is Mary related to John?Solution. ► Break the given sentence at as.► Resolving from the last, In the view of John.► My father’s wife – mother.► Only son of mother – himself, i.e. John.► Daughter of John – daughter.So, the answer is daughter.Example 4: Introducing Suresh, Kalpana said,” His brother’s father is the only son of my grandfather”. How is Kalpana related to Suresh?Solution. ► Break the sentence at is.► From the last up to is: The only son of my grandfather – father► From the first up to is: his brother’s father – father► Suresh’s father = Kalpana's fatherSo, they are brother & sister. Thus the answer is sister.

Note:Like in the above type of problems From either ends if it is like Father = Father,  Uncle= Uncle, Mother = Mother, Aunt = Aunt….. Then they both may be brothers/sisters /bother & sister depending upon their sex.