Ques 1: If you could use any source of energy for heating your food which one would you prefer? State one reason for your choice.Ans: Natural gas can be used for heating and cooking food because it is a clean source of energy. It does not produce a huge amount of smoke on burning. Although it is highly inflammable, it is easy to use, transport and it produces a huge amount of heat on burning.Ques 2: Write the function of voltmeter in an electric circuit.Ans: The function of the voltmeter in a circuit is to measure the voltage drop across any appliance. The voltmeter is always connected parallel in the circuit.Ques 3: What happens to the image distance in the normal human eye when we decrease the distance of an object, say 10 m to 1 m ? Justify your answer.Ans: If the object distance is greater than 25 cm the image is always formed on the retina as the focal length of the human eye lens gets adjusted depending on the object distance. This special property of human eye is called as power of accommodation. Hence, image distance will remain same if object distance changes from 10 m to 1 m.Ques 4: List two different functions performed by pancreas in our body.Ans: The pancreas contains both the endocrine and exocrine portions. The exocrine region secretes sodium bicarbonate and many digestive enzymes. The pancreatic amylase causes breakdown of starch, pancreatic lipase causes breakdown of lipids, and trypsin causes digestion of proteins The endocrine regions secrete hormones i.e. insulin and glucagon. These hormones regulate the level of glucose in the blood. Insulin decreases while glucagon increases the blood glucose level.Ques 5: How it can be proved that the basic structure of the Modern Periodic Table is based on the electronic configuration of atoms of different elements?OR The electronic configuration of an element is 2, 8, 4. State its: (a) group and period in the Modern Periodic Table. (b) name and write its one physical property.Ans: Modern periodic law states that the physical and chemical properties of an element in the periodic table are the periodic function of the atomic number of that element. Electronic configuration of the elements plays an important role in the placement of elements in the modern periodic table. The valence shell electron of an element decides its position in a particular group or period. For example, if the electronic configuration of an element is 2, 1, it means that the element belongs to group I and 2nd period (valence electron is present in the 2nd shell). Similarly, if the electronic configuration of an element is 2, 8, 1, it means that the element belongs to group I and 3rd period (valence electron is present in the 3rd shell).Thus, the modern periodic table is based on the electronic configuration of the different elements.OR (a) The electronic configuration of the given element is 2,8,4. Since, the number of valence electrons for the given element is 4. Hence, the element belongs to group 14 (10+4) and the 3rd period.(b) The atomic number of the given element is 14. Hence, the given element is Silicon. Silicon is a metalloid.Ques 6: Nervous and hormonal systems together perform the function of control and coordination in human beings. Justify this statement with the help of an example.Ans: In human beings, control and coordination is brought about by both nervous system and endocrine system. Nervous system works by generation and transmission of electrical impulse while the endocrine system works by secreting chemical messengers called hormones. These systems complement the action of each other to control and coordinate different functions in our body.For example, when an emergency stimulus is detected by the nervous system, the stimulus is received and analysed by CNS that send message to effectors to provide proper response. At the same time, the sympathetic nervous system activates adrenal gland to release adrenaline that prepares body by increasing heart rate, blood pressure, respiration and dilates pupil etc. Thus, both these systems interact and work together to produce an effective response.Ques 7: Trace the sequence of events which occur when a bright light is focused on your eyes.Ans: When bright light is focussed on our eyes, then it goes to the brain, the brain reverts back the message by motor neuron which contracts the pupil. The sequence of events which occur is:Receptor → Sensory neuron → Brain → Motor Neuron → Eye → Eye muscle contractsQues 8: What is photosynthesis? Explain its mechanism.Ans: Photosynthesis is a process in which the energy of light is utilised to produce simple organic compounds in autotrophs. In the process of photosynthesis the energy of sunlight is captured by photosensitive pigment like chlorophyll in green plants. The energy harnessed by light is utilised for photolysis of water molecules within the chloroplasts of green plants. As a result nascent oxygen is released as molecular oxygen gas. Hydrogen released by the reduction of water is further utilised by the plants in light independent reaction where carbon dioxide is reduced to simple carbohydrates or sugars in a series of metabolic reactions within the plant chloroplasts.The detailed equation of photosynthesis can be represented as:human6CO2 + 12H2O → C6H12O6 + 6O2 + 6H2OQues 9: (a) Draw magnetic field lines produced around a current carrying straight conductor passing through cardboard. Name, state and apply the rule to mark the direction of these field lines. (b) How will the strength of the magnetic field change when the point where magnetic field is to be determined is moved away from the straight wire carrying constant current? Justify your answer.Ans: 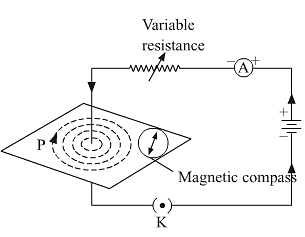 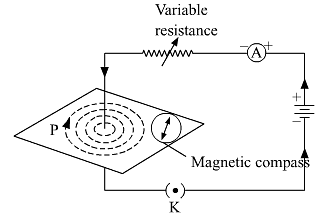 Ques 10: In the experimental set up to show that "CO2 is given out during respiration", name the substance taken in the small test tube kept in the conical flask. State its function and the consequence of its use.Ans: In the above mentioned experimental setup, lime water is taken in a small test tube which is kept in the conical flask. Lime water is used to detect the presence of carbon dioxide. When carbon dioxide passes through lime water, it turns milky due to the formation of calcium carbonate.Hence, it is used in the above experiment to check whether CO2 is released during respiration.