Q 1. Interpret the concept of 'liberalisation' in the field of the economic sphere during the nineteenth century in Europe. [1]

Interpret the contribution of the French in the economic development of the Mekong Delta Region.

Q 2. How had hand printing technology introduced in Japan? [1]

How had the translation process of novels into regional languages helped to spread their popularity?

Q 3. How is over-irrigation responsible for land degradation in Punjab? [1]

How is the cement industry responsible for land degradation?

Q 4. How can democratic reforms be carried out by political conscious citizens? [1]

Q 5. What may be a goal of landless rural labourers regarding their income? [1]

What may be a goal of prosperous farmer of Punjab?

The development goal for a landless rural labourer would be:

Development goals of the prosperous farmers from Punjab are:

Q 7. Why do banks or lenders demand collateral against loans?  [1]

Bank ask for collateral while giving loan because of following reasons:

Q 8. How had Napoleonic code exported to the regions under French control? Explain with examples. [3 × 1 = 3]

Explain with examples the three barriers that are responsible for economic growth in Vietnam.

There were several barriers to economic growth in Vietnam which are given here under:

Q 9. How had the Imperial State in China been the major producer of printed material for a long time? Explain with examples. [3 × 1 =3]

How had novels been easily available to the masses in Europe during the nineteenth century? Explain with examples.

The following can be the cause why China is still regarded to be the pioneer in printing materials:

Q 12. "The assertion of social diversities in a democratic country is very normal and can be healthy." Justify the statement with arguments.  [3]

Q 13. "Women still lag much behind men in India despite some improvements since independence." Analyse the statement. [3 × 1 = 3]

Women are still lagging behind men under certain scenarios in India:

Q 14. How are political parties recognized as regional and national parties in India? Explain with examples.

Conditions for Recognition as a National Party:

Conditions for Recognition as a Regional Party:

Q 15. "Consequences of environmental degradation do not respect national or state boundaries." Justify the statement. [3]

Q 16. Why is the 'tertiary sector' becoming important in India? Explain any three reasons. [3]

How do we count various goods and services for calculating the Gross Domestic Product (G.D.P.) of a country? Explain with example.

Importance of the tertiary sector:

Q 17. Describe the importance of formal sources of credit in economic development. [3 × 1 = 3]

Describe the bad effects of informal sources of credit on borrowers.

Q 18. How can consumers use their 'Right to Seek Redressal'? Explain with example.  [3]

Q 19. Who had organized the Dalits into the 'Depressed Classes Association' in 1930? Describe his achievements.

"Series of changes affected the pattern of industrialization in India by the early twentieth century." Analyze the statement.

"Industrialization had changed the form of urbanization in the modern period." Analyze the statement with special reference to London.

The role of the Indian economy in the nineteenth-century world economy can be explained as follows:

The pattern of industrialization changed in the 20th century due to various reasons. They are:

Q 21. How are industries responsible for environmental degradation in India? Explain with examples. [5 × 1 = 5]

The industrialisation has led to environmental degradation in the following ways:

The different forms that have common arrangements of power-sharing:

Q 24. Describe the importance of democratic government as an accountable and legitimate government. [5 × 1 = 5]

It allows for the participation of the people in the political process, it is people's own government thus, it is legitimate:

Q 25. Why do multinational corporations (MNCs) set up their offices and factories in certain areas only? Explain any five reasons. [5 × 1 = 5]

MNCs are interested to set up their manufacturing units in different areas because:(i) The labour in developing countries are cheap and easily available.(ii) There is flexibility in labour laws which made MNC's easier to set up industries here.(iii) The markets in developing countries are very good for selling products and making huge profits.(iv) There is available support from the government to make way for Special Economic Zones.(v) Local companies and manufacturers also cooperate with the MNC's in the process of manufacturing by supplying the required products.

Q 26. (A) Two features a and b are marked on the given political outline map of India. Identify these features with the help of the following information and write their correct names on the lines marked near them. [1 × 2 = 2](a) The place where the Indian National Congress Session was held.(b) The city where the Jallianwalla Bagh incident took place.(B) Locate and label any three of the following with appropriate symbols on the same given outline political map of India. [1 × 3 = 3](i) Kalpakkam – Nuclear Power Plant(ii) Vijayanagar – Iron and Steel Plant(iii) Noida – Software Technology Park(iv) Paradeep – Sea Port(v) Sardar Sarovar – Dam 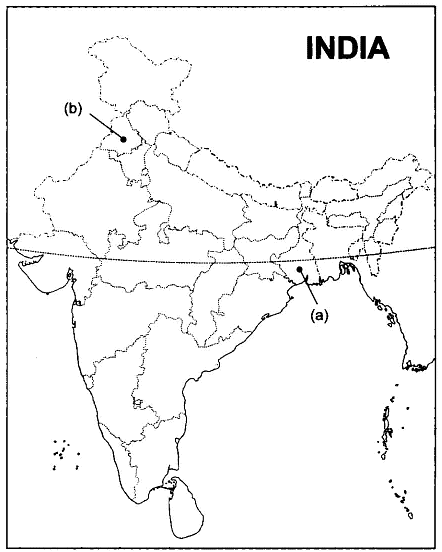 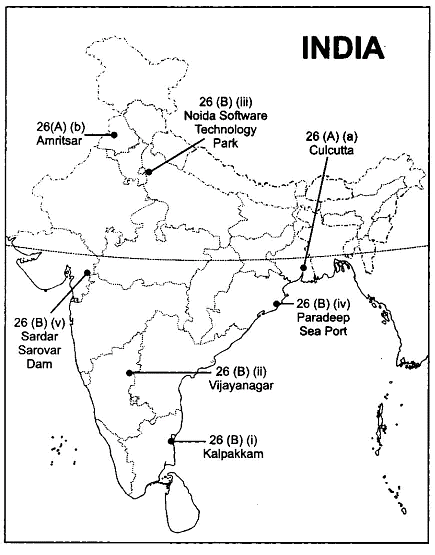