The document Bohr's Model of Hydrogen Atom and Photoelectric Effect Class 11 Notes | EduRev is a part of the Class 11 Course Chemistry for JEE.
All you need of Class 11 at this link: Class 11

The arrangement of all the electromagnetic radiation in a definite order (decreasing or increasing of wavelength or frequency is known as electron magnetic spectrum. 1. Emission SpectrumThis spectrum of radiations is emitted by any source or atom or molecule of any substance (Which is excited by heating or electric discharge).

The spectrum of H atom is observed as discontinued line spectra. The line spectra is different in 3 regions viz., UV, visible and IR. The different lines observed H spectrum were classified into different series and named after their discoverers.

Rydberg gave an empirical formula to calculate wavelength, which is applicable to all series.

It was the first model based on Planck's quantum theory and the model explained stability of atom and line spectrum of hydrogen. m and v are mass and velocities of electron respectively and r is radius of orbit and n is integer which is later related with orbit number and shell number and h is Plank's constant.

3. The energy of these circular orbits have fixed values and hence electron in an atom can have only certain values of energy. It is the characteristic of an orbit and it cannot have any orbit value of its own. And therefore energy of an electron is also quantized.

4. As long as electrons remain in these fixed orbits, it doesn't lose energy i.e. energy of an electron is stationary (not changing with time) and therefore these orbits are known as allowed energy levels or stationary states and this explains the stability of atom.

6. The emission or absorption of energy in the form of radiations can only occur when an electron jump from one stationary states to other. 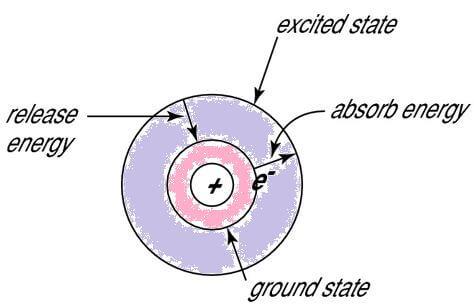 Fig: Energy states in an atom.

Derivation of Radius of different orbits in one electron species (using Bohr's model) :

Derivation of Velocity of electron in Bohr's orbit :

As shell no. or distance increases, the value of T.E. and P.E. increases (however magnitude decreases) and becomes maximum at infinity i.e., zero.

Negative sign indicates that electron is under the influence of attractive forces of nucleus.

Calculation of energy of energy levels in H atom:

If reference value (P.E at ∞) is assigned value other than zero. -

(ii) P.E./T.E. of each shell will be changed however difference in P.E./T.E. between 2 shell will remain unchanged. When electron in an excited atom comes back from higher energy level (n2) to lower ever level (n1) then it emits a photon, having energy equal to difference in energy levels.

The theoretical value is very closed to observed value.

Wavelength or wave no. of any line of any one electron species can be calculated as: 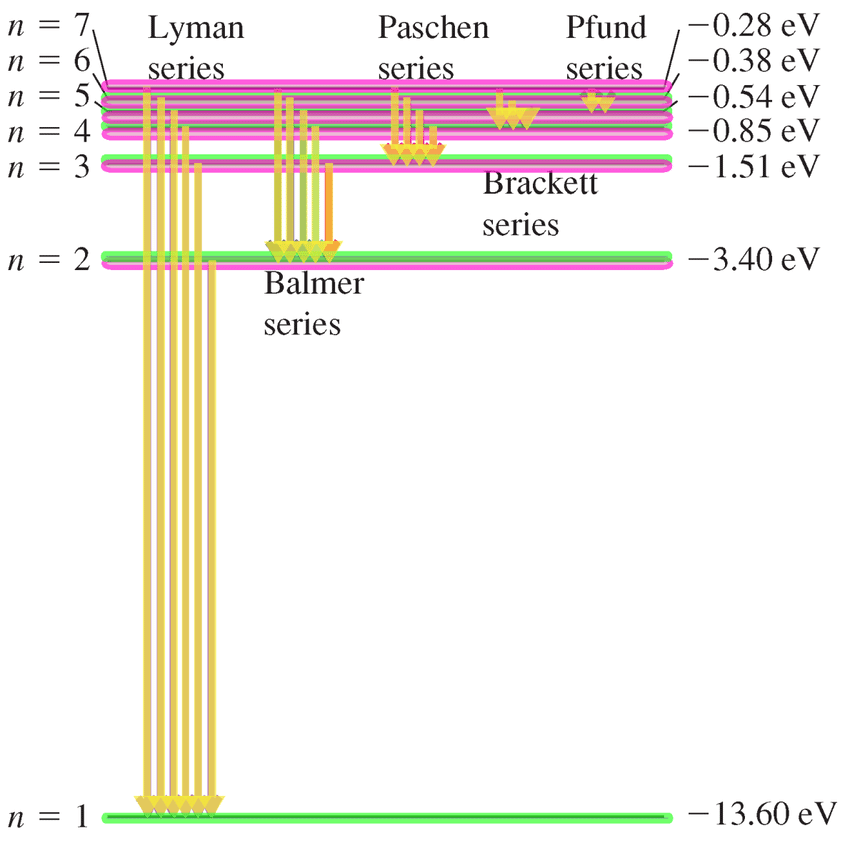 Ex. Calculation of different types of maximum possible radiations which can be observed in (from higher energy level to lower energy level)

Total no. of radiation obtained having difference wave lengths =

Total no. of different radiations:

Ex. Hydrogen like species is observed to emit 6 wavelengths originating from all possible transitions between a group of levels these energy levels have energy between - 0.85 eV and -0.544 eV (including both these energy levels) calculate

(i) The quantum number of levels between which transition is taking place.

(i) It is applicable only for one-electron species.

(ii) He couldn't explain the fine spectrum of hydrogen when a powerful spectroscope is used then several lines which are very closely placed are observed in addition to the expected lines later this problem was solved by Sommerfeld who introduced the concept of the subshell.

(iv) He couldn't give a theoretical reason for most of his assumption, for example, he couldn't justify why angular momentum of the electron should be quantised.

(v) Spectrum of isotopes of hydrogen were expected to be same according to the Bohr's model but found different experimentally.

Three refinements of the Bohr model were worked out by Arnold. Sommerfeld and are jointly responsible for giving rise to small deviations in the allowed energies from the values En These refinements brought the calculated frequencies into even better agreement with observation (from four to five significant digits). The refinements were:

(a) the introduction of elliptical orbits;

(b) allowance for an orbiting motion of the nucleus; and 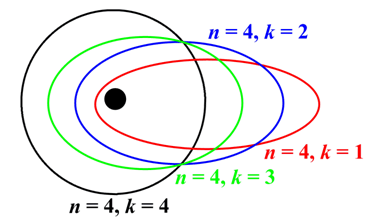