The document Capacitors - Physics, Solution by DC Pandey NEET Notes | EduRev is a part of the NEET Course DC Pandey (Questions & Solutions) of Physics: NEET.
All you need of NEET at this link: NEET

Ques 1: Find the dimensions of capacitance.Sol:

= [M-1L-2T4A2]Ques 2: No charge will flow when two conductors having the same charge are connected to each other. Is this statement true or false?Sol: Charge does not flow if their potentials are same.Ques 3: Two metallic plates are kept parallel to one another and charges are given to them as shown in figure. Find the charge on all the four faces.

Hence, charges are as shown below

Hence charge on different faces are as shown below.

Electric field and hence potential difference between the two plates is due to ±2.5 q

Ques 1: Find the charge stored in all the capacitors.

Sol: All three capacitors are in parallel wit h the battery. PD across each of them is 10V. So, apply q = CV for all of them.

Ques 2: Find the charge stored in the capacitor.

Sol: Capacitor and resistor both are in parallel wit h the battery. PD across capacitor is 10V. Now apply q = CV.

Ques 3: Find the charge stored in the capacitor.

Sol: In steady state current flows in lower loop of the circuit.

(b) Now total charge will become 1600 μC. This will now distribute in direct ratio of capacity

They will have a common potential (in parallel) given by.

Ques 5: A 100 μF capacitor is charged to 100 V. After the charging, battery is disconnected. The capacitor is then connected in parallel to another capacitor. The final voltage is 20 V. Calculate the capacity of second capacitor.
Sol: Charge, q = CV = 104μC
In parallel common potential is given by

Solving this equation we get
C = 400μF

∴ Energy dissipated across R in the form of heat = E - U

Ques 2: How many time constants will elapse before the current in a charging RC circuit drops to half of its initial value?
Sol:

While q2 increases exponentially from

Corresponding graphs and equation are given in the answer. Time constant of two exponential equations will be

Ques 4: A capacitor of capacitance C is given a charge q0. At time f = 0, it is connected to a battery of emf E through a resistance R. Find the charge on the capacitor at time t.
Sol: qi = q0 qf = EC
Now charge on capacitor changes from qi to qf exponentially. 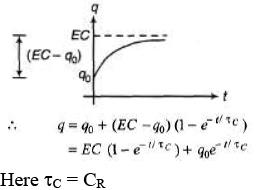 Ques 5: Determine the current through the battery in the circuit shown in figure

Ques 6: For the circuit shown in figure find

(b) In steady state no current flow through capacitor wire. PD across R1 is E.

(d) When switch is opened, capacitor is discharged through resistors R1 and R2